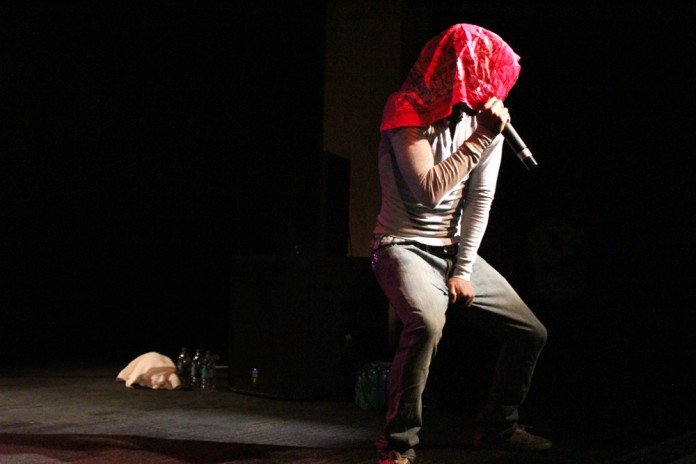 Lil B is what happens when the defunct Bay Area Hyphy movement is exhumed, reanimated, and “swagged out” with no concern for the public’s well being.

Rapper Lil B, also known as The BasedGod, came to University of California, Santa Barbara’s The Hub on Friday, April 4. The show, put on by Associated Students Program Board, was free for all UCSB students. Lil B delivered a performance punctuated with absurdity, monotony, and a very minimal musical ability–which is precisely what The BasedGod is celebrated for.

The doors opened at 7 p.m., and the long line reflected an undeserved hype for the Bay Area rapper. There was a notable increase in the The Hub’s security, indicating an expectation for rowdiness on the eve of Deltopia weekend, but there were no major incidents. Three arrests were made early on in the show for public drunkenness, but Sergeant Robert Romero later commented that “the crowd was pretty cooperative and mellow,” and according to second-year biology major and CSO Ryan Vincent, the show was “a little over-staffed.”

The Hub wasn’t initially planned to be the venue for Lil B, however; according to ASPB Publicity Coordinator Jena Pruitt, “this was meant to be a big welcome back show in Storke Plaza but the school said no.” Fortunately for those blessed with an unimpaired hearing ability, Lil B’s music was contained inside the UCen, mitigating the number of people subjected to the experience.

The Hub filled up quickly as DJ Kuro opened up the show with a strong set, featuring a mixed bag of “swag,” old school Snoop Dogg, and trap, and eventually transitioning into EDM–all with a bass so heavy that it seemed to threaten the structural integrity of the venue. The crowd responded well to Kuro’s efforts to maintain an excited atmosphere, although Lil B proved to be incapable of matching the musical ability of his opening act.

At 8:45 p.m., Lil B walked on stage, bouncing about like his life depended on it, and offered up to the energized crowd one of the most incredulous lines of the night: “I’m Lil B. I’m walking history.” The audience was then treated to the musical stylings of a distorted, bass-heavy beat and haphazard flow of “Don’t Go Outside,” one of his classics. With lyrics like “I’m off to LA with my niggas / I’m off in LA fucking bitches,” it’s easy to see why he chose to start his set with it. However, Lil B seemed to have forgotten a good portion of his lyrics and instead chose to fill in the majority of the gaps by shouting nonsense, a technique he wasn’t shy in utilizing throughout the show.

Lil B boasts a catalogue of over 1,500 songs, but any differentiation between the tracks is nominal, as The BasedGod’s style of repeating a single line ad nauseum, off-tempo, and over crudely monotonous beats tends to wear on the senses beyond any tolerability. But despite the lacking of any kind of genuine musicality, Lil B displayed an incomparable talent for punctuating the end of each song with whatever absurd, fragmentary thought he held at the time. One example from near the end of the show was when Lil B shouted “keep that love in your heart”–an unusual choice of phrasing considering it preceded a “swagged” out remix of Drowning Pool’s “Let the Bodies Hit the Floor.”

The crowd’s enthusiasm didn’t waver much as the performance moved forward: hands were raised, “woo”s were shouted, and a select few individuals demonstrated their ability to dance mostly on beat. But as Lil B seemed more content with screaming “yeah” and “swag” rather than actually rapping, it would be difficult to attribute the crowd’s enjoyment to his efforts, but rather in spite of them.

By 9 p.m., the vibrations of the bass-heavy music caused two large speakers to topple over, nearly injuring those nearest the stage, but the accident created a brief respite for those in attendance to realize how horrible everything was. Yet the epiphany was unfortunately short-lived, and Lil B resumed his activities. There was also an incident of vomiting in the crowd; according to second-year biology major Jessica Bills, a girl was “washing her hair in the bathroom. Someone puked on her…”

One of the few musically capable events of the show was near the end of the night, when Lil B performed his hit song “Wonton Soup,” which lit the crowd on fire. This fact could be attributed to the crowd chanting the song’s lyrics: “hopped up in my car (swag) then I drop my roof / wet like wonton soup. That’s just how I do (swag),” which undoubtedly served to anchor Lil B in reality just long enough to perform the entirety of the song. This state of lucidity quickly vanished, however, when one of the most bizarre events to ever transpire at a concert occurred: Bob Dylan’s “Catch the Wind” was played while The BasedGod shouted “swag” at irregular intervals, proving without a doubt that the music of Bob Dylan is not improved by the addition of a hype-man.

To be “based” is to lack concern for other people’s opinion, and with that in mind, it is clear that Lil B is certainly The BasedGod. We can only hope that he develops a pang of self consciousness before his next show.