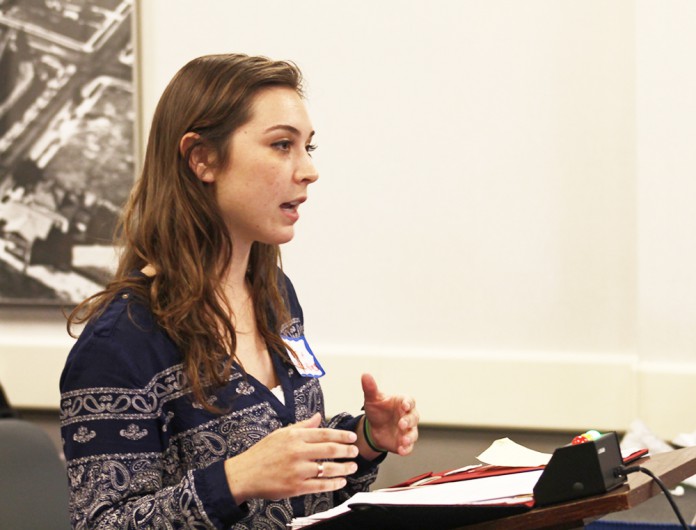 External Vice President of Local Affairs (EVPLA) Alex Moore touched on a couple of these issues in his weekly report to the Senate, including the recently implemented surveillance cameras and security measures in place during Deltopia the first weekend of the quarter.

The cameras, located both on the University of California, Santa Barbara property as well as at various intersections on Del Playa Drive, were installed at the request of the UCSB administration, which is funding their use. According to Moore, the main priority of Isla Vista Foot Patrol (IVFP) is to have access to the camera feeds during Deltopia, after which point the administration aims to leave the cameras in place until university housing move-outs at the end of the school year.

There have been claims that the feeds will only be accessed after a criminal incident has taken place, but Moore expressed skepticism that this would remain the case in the future. Though he has talked to multiple IVFP officers, he noted that the department seemed unable to provide a unified message on the issue of the cameras.

“The way they were put up was really not transparent,” Moore said. “For something that affects the community, the community had no say, no heads up; there’s been no PR or attempt to explain what’s going on or why they’re there, how long (they will be) there or the process of monitoring them. All these things that should have been part of a community discussion just didn’t exist.”

An unnamed student has filed a public records request for all documentation pertaining to the university’s contract with CamGuard, the supplier of the surveillance equipment. The administration’s response and whether or not it chooses to release the files will be informative, Moore said.

Student Advocate General Chief of Staff Bailey Loverin attended Wednesday’s meeting to address the recent backlash she has received from publications such as the New Republic and the Los Angeles Times regarding “A Resolution to Mandate Warnings for Triggering Content in Academic Settings,” passed by the Senate on Wednesday, Feb. 26.

Loverin played a primary role in writing and endorsing the resolution, which encourages a policy of required warnings on class syllabi for any course content that could trigger symptoms of Post-Traumatic Stress Disorder in afflicted students. Having been approved by AS Senate, the resolution will be voted on by Academic Senate in the near future.

Opponents of trigger warnings have voiced concerns about the censorship of university professors, which Loverin insisted are based in misinformation and a misunderstanding of the legislation’s goals. She clarified that she wishes to encourage empowerment rather than sheltering, and that even if students with PTSD choose to avoid content that may trigger their symptoms, it would not necessarily mean they would be exempt from such content on, for instance, an exam.

Loverin also addressed comparisons of UCSB to Oberlin College made by several recent articles. She differentiated between the two situations by explaining that while Oberlin’s aims have been to eliminate controversial class content altogether, she simply wishes to give vulnerable students a choice ahead of time as to whether they think it is best they be exposed to it.

“I really support seeing [this content],” Loverin said. “I want to be challenged. I want to be offended. I want to get angry and passionate in classes. I expect to feel these things.”

A collection of bills dictating changes to the structure of Associated Students was passed later that evening, signaling the enactment of a restructure plan that has been developed over the past several months. Within the bills, numerous adjustments were made to several AS job descriptions, and one important clause differentiates between student employees and AS government members in order to help remedy recent issues brought to light by the Internal Revenue Service.

Additional structural changes include the implementation of a committee system within the Senate as well as the creation of an AS Assembly. The committee system will divide senatorial responsibilities in a manner that caters to individual senator strengths. The Assembly will comprise everyone who holds a position in AS and will convene once a quarter after a series of preceding work groups to be attended by the chairs of boards, commissions, and committees, henceforth known as AS “units.”

Other significant adjustments will affect presidential relations with AS units. As dictated by the restructure bills, the president must be present for the selection of all AS unit chairs. The bills also signify a change in presidential jurisdiction over press entities (specifically KCSB and The Bottom Line), which will continue to be funded by AS but presided over by the Press Council.

One new piece of legislation passed that evening was “A Resolution in Support of Re-envisioning the Isla Vista Master Plan,” which calls for a new official plan to be made for Isla Vista development. The old Master Plan, which accounted for development through 2007 and was never officially approved by the California Coastal Commission, is considered by some senators to be outdated and not necessarily considerate of all parties concerned with Isla Vista, such as non-student residents and longstanding business owners.

“The Master Plan seems a bit outdated, and it didn’t take all the different stakeholders of Isla Vista into account,” said Off-Campus Sen. Jimmy Villarreal, one of the resolution’s authors. “This resolution is just asking to kind of reconcile that.”