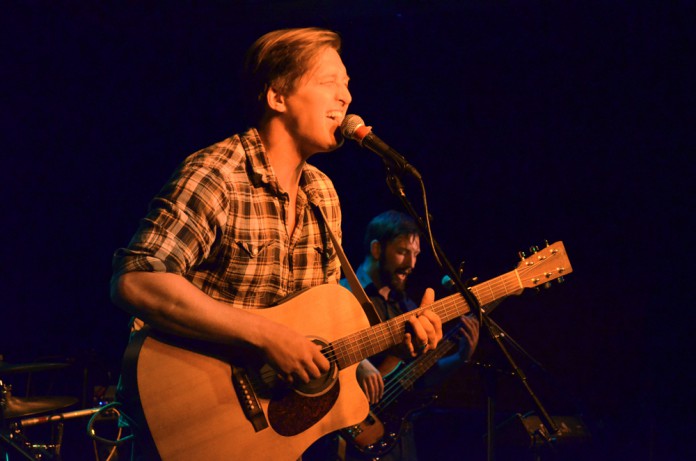 The lucky few guests in attendance at SOhO Restaurant and Music Venue on Thursday, April 3, were treated to a night of music that showcased three exciting, up-and-coming Santa Barbara bands, each occupying a different level of increasing development and prominence. Performing in this intimate State Street event was Isla Vista’s own Sun Daes; the unsigned, folk-inspired band ERLAND; and the enigmatic indie-rock band Ghost Tiger, celebrating the release of their latest EP. Presented by We The Beat, this night was not just about these three bands, but was also about celebrating the local Santa Barbara music scene, which was so aptly described by ERLAND frontman as being “extremely underrated, but f—ing exciting.”

Opening up the celebration was the Sun Daes, who have been gracing IV backyards and garages with their vibrant surf rock. For those who haven’t heard the Sun Daes perform (and even if you think you haven’t, you probably have)–think of a band perfectly suited to Isla Vista. Okay, do you have it? Well yeah, that’s about what they are: high-raised guitars, low slung bass, and the kind of devil-may-care temperament that can only stem from performing in the relaxed, forgiving, and welcoming Santa Barbara atmosphere.

But despite the venue change, these four floppy-haired, eclectically dressed college kids (Max Goldenstein, Gabe Poissant, JD Severino, and Jared Payzant) seemed as at home on the SOhO stage as they do in a rowdy neighbor’s backyard, and their loosey-goosey style of loud surf rock translated well to the non-college student population. Their performance served as an introduction, not just for the event but also to the general public.

Following Sun Daes was the more matured, folk-esque ERLAND, who have yet to be signed to a major record label but gave the growing crowd a great taste of their expansive take on the folk singer-songwriter style. Featuring a few raucous guitar riffs accompanying their more classical, naked folk style, the Santa Barbara foursome demonstrated an intriguing and unique take on the resurgent folk genre. Their cover of Bob Dylan’s “The Times They Are A-Changing” served as a perfect example of this sentiment. Beginning with the classic “one man and his guitar” style, frontman Erland Wanberg sang in the acoustic, raw style of the original. But when the chorus broke, a loud, electric, yet tight, rock backing came with it. In this, their most successful song of the night, ERLAND managed to bridge the gap between the acoustic New York Folk Club Dylan, to the electric Bob of 1965 Newport. In doing so, ERLAND announced that they have greater aspirations than being another one of the Mumford & Sons clones who have sprouted out of sound holes across the country in recent years.

Finishing the night was the elaborate rock band Ghost Tiger, who was promoting the release of its latest single, “Birdfeeder.” This five-part indie band, which produces a sound that sounds like it stems from more categories than you could count on just one hand, exhibits a composed and interesting take on its genre with a blend of Bluegrass roots, harmonies, and polarizing vocals in a bigger and more modern sound than one would expect. This band, the most established of the three, was previously named Santa Barbara’s Best New Area Band by The Independent and is well on its way to playing its way out of our local scene. And if “Birdfeeder” is any indication, it will happen quite soon.

In a night all about local talent, Santa Barbara whole-heartedly delivered, and the bands who performed this night at SOhO showed just how thriving this hidden gem of a musical community is.