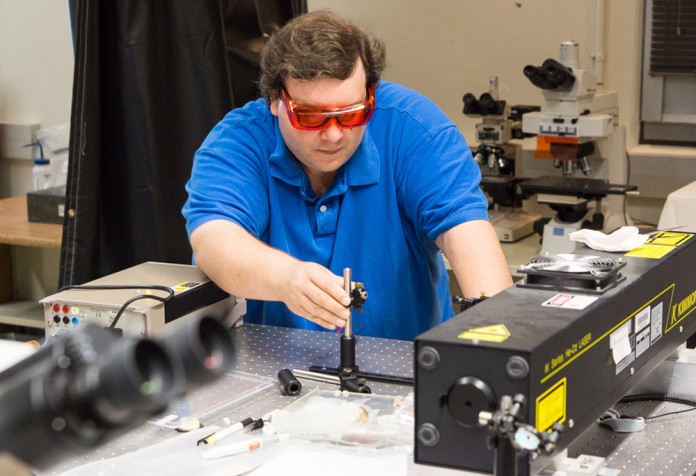 This fall, BMW plans to incorporate new laser light technology into its new i8 plug-in hybrid sports car. The basic version of the car contains high-intensity and energy-efficient full LED headlamps, but the optional laser boost features ensures a high-beam range of up to a third of a mile. And while BMW has been known to have some rather strong headlights, the laser boost will not cause any damage to our eyesight.

According to Laser Energy Works, the light LEDs produce very little energy and are non-coherent or non-culminated, which is the result of photons moving in random directions at random times, generating random frequencies. In other words, LEDs are similar to common household light bulbs in the light that they produce. Lasers, on the other hand, are monochromatic, collimated, and coherent. In other words, they have a single-color wavelength, are non-divergent, and have its wavelengths in-phase. Additionally, the peak power output of lasers is measured in watts, while that of LEDs is measured in milliwatts.

We’ve been told time and again to never look directly into a laser because it could blind us with its intensity; however, the i8’s headlights should not result in trouble for nighttime drivers or harm to our eyes.

HowStuffWorks explains how this is possible: “What happens with each light is that three blue lasers positioned at the rear of the assembly fire onto a set of mirrors closer to the front. Those mirrors focus the laser energy into a lens filled with yellow phosphorus. The yellow phosphorus, when excited by the blue laser, emits an intense white light. That white light shines backward, onto a reflector. The reflector then bounces the more diffused white light forward, shining it out of the front of the headlight casing as a beam that is powerful, yet still able to be gazed upon.” This way, when you look at the car’s lights, you will not be looking directly at an actual laser.

These lasers will apparently have an illuminating power that is a thousand times more powerful than LEDs, and yet the system only uses about half the power. Since the i8 is a hybrid car, the electric power can go toward operating the engine while drawing less energy from the main battery. Also, because laser-powered headlights are so much brighter, the headlamps themselves can be much smaller, giving designers much more flexibility.

Although BMW hasn’t stated when laser-powered headlights will be a regular option on its production cars and SUVs, other companies may already be working to develop similar laser-powered lighting systems for their own vehicles. In fact, according to Computerworld, Audi is also experimenting with laser headlight technology. For now, we’ll just have to wait and see where this new development takes us and how people will react once it is fully implemented.