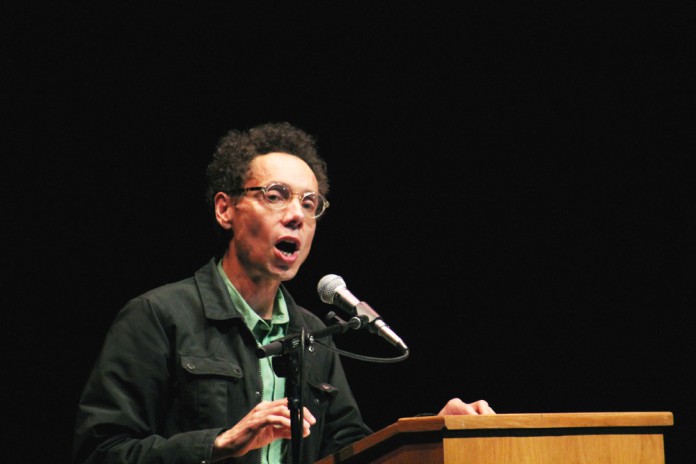 “I live in New York City, and we have very long and cold winters, and also–this is entry into too-much-information territory here–but I live next to what used to be St. Vincent’s Hospital, and they knocked it down, and whenever you knock down a building in New York, you release thousands of rats. So rats have invaded my neighborhood. So this winter, I’ve basically been sitting in my apartment shivering, and surrounded by rodents. And in this, I get an offer to come to Southern California, where not only is the weather warmer, but from what I can tell walking around Santa Barbara downtown today, the local wildlife is a great deal more attractive.”And so began an evening in Arlington Theatre on Friday, April 11, with Malcolm Gladwell, presented by University of California, Santa Barbara’s Arts & Lectures. Gladwell isa staff writer at the New Yorker as well as the New York Times bestselling author of “The Tipping Point: How Little Things Can Make A Big Difference,” “Blink: The Power of Thinking Without Thinking,” “Outliers: The Story of Success,” “What the Dog Saw: And Other Adventures,” and the book he was presenting, “David and Goliath: Underdogs, Misfits, and the Art of Battling Giants.”

In front of a packed theater, dressed casually in jeans and a light jacket, Gladwell talked about the nature of rebellion and “why people in our world choose to fight even when the odds are overwhelmingly against them.” It was a particularly interesting talk so close on the heels of the Deltopia riots, but his point was not necessarily about the nature of college town riots, but rather largely focused on what causes large scale change in society by the most unlikely of individuals.

He framed his talk around the story of Alva Vanderbilt (née Erskine Smith, 1853-1933) who was a poor woman from Mobile, Ala., and was, as Gladwell described her, “a force of nature. She was this domineering, egotistical, controlling, maniacal, obstreperous, impossible child who picked fights with anyone she could pick a fight with, and if there wasn’t someone to pick a fight with, she made up a fight, and then picked it.”

After her family moved to New York City, Smith became Vanderbilt by marrying a member of the famous Vanderbilt family, becoming a New York society woman and marrying her beautiful daughter Consuelo off to an English duke.

“In this era, at the turn of the century, it was all the rage for the wealthy daughters of American millionaires to be married off to the penurious sons of the English aristocracy. They even had a term for it, it was called ‘cash for class,’” said Gladwell.

Vanderbilt eventually, after divorcing her first husband (“unheard of in those days”), married money again and eventually became a leading member of the women’s suffragette movement in the United States, along with her daughter. She was a success story for being what Gladwell calls the “unlikely radical.” To fully explain Alva Vanderbilt to the audience and keep things light, Gladwell said, to great applause and laughter from the audience, “In the words of the infamous Kanye West, I’m not saying she’s a gold digger…”

So why, according to Gladwell, do people choose to rebel? What is it about defiance that is so difficult to explain, and how do people defy convention and authority? Gladwell said, “People will defy authority when the costs of that defiance are smaller than the benefits. If going forward with the defiance, if it’s easier, or has a greater pay off than obeying authority, they’re going to do it!”

Ultimately, the reason people will rebel is the idea of legitimacy. If they feel they are legitimate, and that they are taken seriously by the people who govern them, then there is no cause for rebellion. But, “if you deny a group legitimacy, they will work hard and come back to defeat you.”

After his talk, Gladwell opened up the floor to audience members for a very entertaining Q&A. Questions ranged from asking for his opinion on Edward Snowden to the nature of rebellion in our very own Isla Vista (with the bank burning of the 1970s) to questions such as “Do you know your influence in the hip-hop community?”

To the latter question, Gladwell responded, “No. I am deeply charmed and touched. Is this about Macklemore? Yes, Macklemore has this whole song about ‘10,000 hours,’ which is so fantastic.” The phrase “10,000 hours” is a a reference to Gladwell’s book “Outliers,” which said that 10,000 hours of dedication and practice into a field of interest leads to perfection and success.

Gladwell continued, saying, “The only other time in my life when I felt so extraordinarily blessed is when I was in Sweden recently and I ran into David Hasselhoff. And I did, as one does when one meets the Hoff, insisted that we have a selfie. And so I took a selfie with the Hoff.”

The hilarious moment ended with the audience member asking, “Have you ever seen a 10,000 hours tattoo?”

“Yes!” After seeing the tattoo, Gladwell joked, “I think that just beat the Hoff!”

Gladwell ended his talk with a hopeful message to youngsters and college students, saying, “I was a lost soul at 19. I had no idea what I was going to do. I think that was a good thing… We’re in way too much of a hurry to figure out what we’re best at in the world.” Ultimately, everyone doesn’t need to be Alva Vanderbilt, he said; we just need “one remarkable person acting on their conscience.”