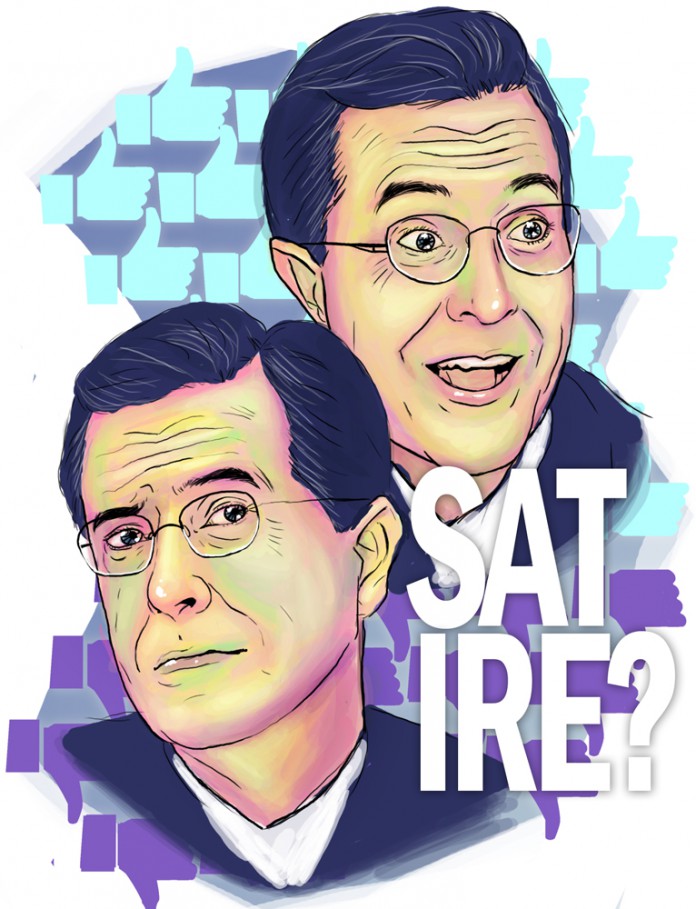 Few comedians today are as reliably apt at satire as Stephen Colbert. Over the past couple weeks, however, considerable outrage has been directed at Colbert for a segment on “The Colbert Report” in which he satirizes NFL owner Dan Snyder’s Washington Redskins Original Americans Foundation—a presumed attempt by Snyder to soften his image given his unwavering support for his team’s racist name. Colbert’s intent was to highlight how ignorant and insensitive Snyder is by introducing his own fictional organization—the “Ching-Chong Ding-Dong Foundation for Sensitivity to Orientals or Whatever.” When Comedy Central, without Colbert’s permission, published an out-of-context tweet under his name that included the satirical foundation, the hashtag #CancelColbert spread like wildfire throughout Twitter and parts of the news media.

Oxford Dictionary defines satire as “the use of humor, irony, exaggeration, or ridicule to expose and criticize people’s stupidity or vices, particularly in the context of contemporary politics and other topical issues.” Anyone at all familiar with the show understands that Colbert’s segment kept true to this definition. Despite well over 1,000 episodes of incisive, spot-on satire, the sudden negative reaction that was summed up in the hashtag demands the full termination of the show based on an out-of-context tweet promoting three minutes of controversial material. The primary argument, expressed by the main reaction’s founder, activist Suey Park, is that Colbert is effectively perpetuating offensive stereotypes and the notion that Asian people are an acceptable butt to jokes.

While he does use an offensive name, the simple perpetuation of which would clearly be objectionable, Colbert, in fact, uses it for deeper, constructive purposes that leave the #CancelColbert argument rather one-dimensional. As any Colbert fan and, indeed, anyone familiar with sarcasm, can tell, the controversial segment was meant to broaden people’s awareness of the stupidity of racial insensitivity as promoted by Dan Snyder. By introducing a more blatantly insensitive foundation and then drawing parallels, Colbert demonstrated how deplorable more subtle racial insensitivity like Snyder’s is, which can ultimately promote a more respectful and conscientious society. Rather than trying to take advantage of what many misguided opponents perceive as a green light to joke indiscriminately about race, he was bringing awareness and the potential for constructive dialogue to a widespread issue that is often unfairly brushed aside in American society.

For satirists like Stephen Colbert to get their progressive messages through, viewers must inevitably see potentially offensive material. But for those who understand the nature and value of satire–including the show’s more youthful, educated target audience–there should be no concern about further internalizing and promoting insensitive stereotypes. For these people, the offending name is not in and of itself funny, but the way it helps take Snyder and show his asininity by extending his work to a more extreme level. Without some sort of objectionable component in his segment, Colbert would not have been able to draw the parallels that illustrated his point so well; satirizing any particularly touchy subject inevitably involves pushing the limits of acceptability a bit further in order to make clear the point the satire’s trying to make.

For many people, the satire contained within shows like “The Colbert Report” and “The Daily Show” are the only methods of exposing and demonstrating the importance of these kinds of issues. Simply being told that issues are important and directly stating why they matter do not always drive the point home as emphatically as seeing the objectionable practices satirized, especially when one cannot relate well with what’s being lampooned. This allows satire to reach out intellectually to a greater audience and in turn promote–consciously or subconsciously–a more tolerant and progressive society. People may also be more receptive to opening their minds more when able to do so in this kind of casual environment as opposed to being candidly told.

Though he can sometimes wade pretty close to the boundaries of decency, we should appreciate, rather than object to, Stephen Colbert’s efforts to beneficially change our collective and individual mindsets. As the heart of “The Colbert Report” and “The Daily Show”’s target audience, college students should remain receptive and analytical to the satirical messages we’re presented with and apply the constructive messages to our own lives.