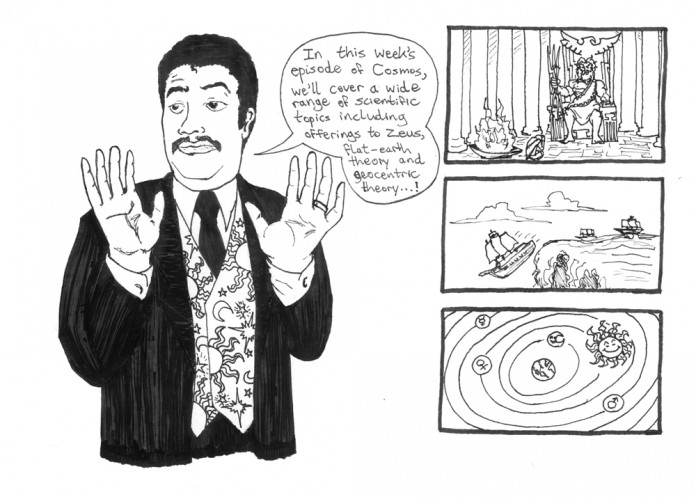 If all of cosmic time, from the Big Bang to the present moment, were condensed and scaled to one calendar year, humans would not diverge from chimpanzees until 8:10 p.m. on Dec. 31. Christopher Columbus would not arrive in America until one second before midnight.

A hundred thousand years ago, when humans lived in small hunter-gatherer groups, there were no such things as golden retrievers or terriers. There were only wolves, which our ancestors molded via artificial selection into every utilitarian and heart-meltingly adorable type of dog we know today.

When you look at the night sky, you are actually seeing the stars as they were deep in the past, because it takes many light years for their light to reach our earthling eyes.

These are only a sampling of the mind-blowing and perspective-changing concepts explored on Fox’s remake of the beloved 1980s science series “Cosmos,” hosted by astrophysicist Neil DeGrasse Tyson. But as mind-blowing and perspective-changing as these ideas may seem, they are nonetheless founded in meticulous research, based on principles of empiricism and parsimony. They have withstood the scrutiny required by the scientific method–a rigorous framework for reasoning and problem solving that has single-handedly fueled humanity’s rapid technological advancement for the past two centuries–and gained membership to an elite club of the best-supported ideas.

Why would it ever be in our interest for a science show to teach ideas that cannot withstand testing? It stands to reason that many people were embittered to hear that various religious groups are demanding that “Cosmos” present a discussion of creationism alongside its discussion of evolution, and that still, in 2014, the American public is willing to acknowledge such demands.

Religion does not play by the same rules as science, and therefore should never be presented as such. It is not worth entertaining for a second the possibility that creationism could be supported by empirical evidence. Trees exist today that are older than some young earth creationists claim the entire planet is. Evolution passes the the scientific method. Creationism fails. Bottom line.

That does not necessarily mean that religion is obstructive and obsolete in the 21st century. The problem is that we insist on presenting scientific theory and religious doctrine to the public as if they are somehow competitors on the same playing field and only one can win. We have created a political rhetoric of creationism vs. evolution that is incredibly misleading.

At present, the media is obsessed with pitting science and religion against each other and telling Americans they must pick a side. The creationist groups’ demands to be included in “Cosmos” come only two months after a debate between Bill Nye (the science guy) and Ken Ham, founder of the Creationist Museum in Kentucky, collected over 2.7 million views on Youtube. This type of showdown only exacerbates the problem, sending us a message that science and religion cannot coexist and that the future belongs to either one or the other.

Instead, we should encourage people to think about religion differently than how they think about science. Religion operates on spirituality, emotion, and tradition–all of which are hallmarks of the human experience and will not be eradicated any time soon. Science requires that we use only our analytical capabilities as a means to understand the world. We need to raise citizens who are able to switch between the two frameworks of thought, and who see the value in both.