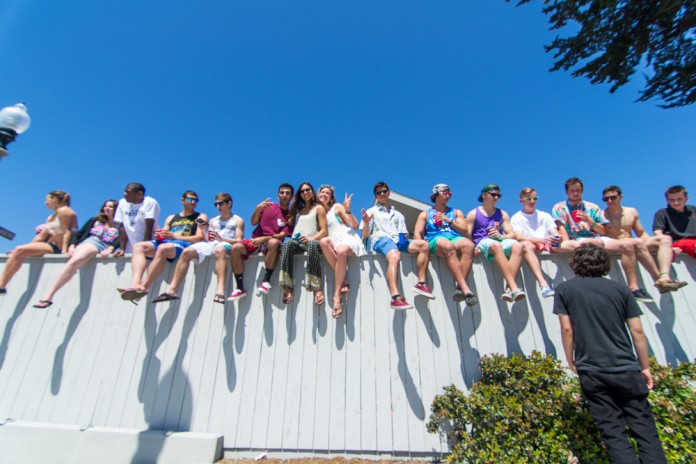 Deltopia is more than a week in the past, and in Isla Vista, the aftermath has fostered the creation of plans for the future. With the community still reeling from the consequences of the event, local law enforcement is continuing its investigation into criminal perpetrators of the civil unrest, and there remain a few lasting marks of the weekend’s pandemonium.

“Anything we can do, we should try to do…  Anything that’s community building helps,” said Pegeen Sootar, Director at the Isla Vista Recreation and Parks District (IVRPD), in reference to possible plans for Deltopia 2015.

According to Sootar, part of the Monday, April 14, IVRPD meeting was dedicated to “thinking of a way to utilize our parks in the future.” Though no official plans were made, the board was pleased that the recent Adopt-A-Block clean-ups had effectively restored community faith and public perception of Isla Vista.

“It affected the community way more than the parks,” said IVRPD General Manager Rodney Gould. “There was no real damage, but a lot of trash. The parks escaped kind of unscathed.”

The only recorded damage of park property over the Deltopia weekend was at the newly constructed Anisq’oyo Park bathrooms. Gould reported that there was written graffiti on the interior of two doors, on a hand blower, and on wall tiles, but that the defacement had been easily and safely removed.

In a more confounding act of vandalism, a bathroom sink had been knocked off the wall; however, a contractor has been contacted to assess and fix the damage.

For now, Gould said, none of the restrictions associated with Deltopia are expected for the upcoming music and arts festival Chilla Vista, held at Anisq’oyo Park on Saturday, May 3. Isla Vistans will be watching the event as an indicator of community efforts, but, presumably, security cameras will not.

The Del Playa camera installations were taken down on the morning of Monday, April 14, but the memory of their presence is still a talking point for future campus plans, as well as the ongoing police investigation.

Though the cameras in Isla Vista may be gone, the cameras on university property may be there to stay. UCSB Administrative Services is currently putting together a “Video Camera Policy Committee” to develop guidelines on the installation and retention of on-campus monitoring devices.

As the campus dialogue on the use of cameras continues, local law enforcement is expanding its investigation into recordings and photos of the civil unrest. With this information in hand, more citations and arrests may be on the way.

Santa Barbara Sheriff’s Office spokesperson Kelly Hoover confirmed that that the investigation into the civil unrest is still ongoing, and law enforcement officials are still “trying to identify people that [were] involved in criminal activity during Deltopia.”

Besides researching hours of recorded footage on Deltopia, officers are also contacting Isla Vista residents whom they believe were involved in active aggression against the police.

Hoover acknowledged the students concerned with the possibility of eviction.

“The Sheriff’s office does not have the authority to evict anyone” unless it is under court order, she said. “It isn’t meant to be a threat—it’s up to the landlord to evict someone.”

The Santa Barbara County Sheriff’s Office has also partnered with the Large Emergency Event Digital Information Repository (LEEDIR), “to assist in our efforts to collect and analyze eyewitness videos and photographs of the Deltopia Civil Unrest incident,” according to a Sheriff’s Office press release. The LEEDIR platform is available for use on mobile devices, and the Santa Barbara Sheriff’s Department is encouraging witnesses to provide photos or video footage of the event. The press release also notes that submissions may be made anonymously.

LEEDIR is noted as a “public and private sector partnership” whose online platform was pioneered by the Los Angeles County Sheriff’s Department as a source of eyewitness information to assist in solving crimes. CitizenGlobal and Amazon Web services were cited as “infrastructure technology companies” that helped launch the platform.

“The Santa Barbara Sheriff’s Office greatly appreciates the assistance of the LEEDIR partnership as the investigation into those responsible for the Deltopia Civil unrest continues,” said the press release.

Parallel to the police investigation, however, is a student discussion on the future of Deltopia as an Isla Vista event. Associated Students President Jonathon Abboud posted “tentative ideas” for Deltopia 2015 onto his Facebook page, formulated by AS executives and members of the UCSB administration, for student input. Abboud cited his hope “for an event with music, locals only and some safety regulations,” noting also that these ideas “were drafted with the general sentiment last week regarding preserving Deltopia, the music and the fun, but not with out of towners.”

The proposed plan includes requiring wristbands for entry to Del Playa (which would be closed to all traffic for the event), allowing for 21-year-olds with wristbands to drink on the street, and having live music on “3 big stages (one on 65, 66, and 67) at the parks” for local bands and DJs.