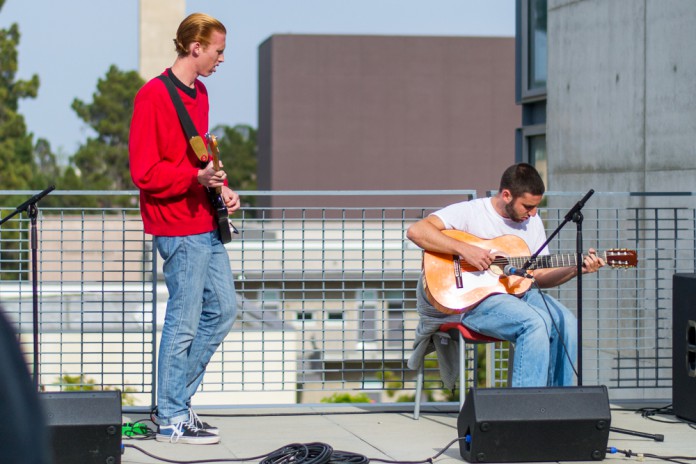 Live music resonated from the third-floor balcony of the Student Resource Building at the University of California, Santa Barbara on the chilly spring evening of April 17. As per usual, students were responsibly hitting the books (or, rather, their computer keyboards) throughout the SRB. But that evening, most of the building’s occupants were there for one event: the first annual Creative Culture Block Party. The event gave off the vibe of an indoor arts festival, and the amount of raw talent could have been enough to put Coachella to shame.

The product of creative mastermind Jena Pruitt, the Block Party took months of preparation. Pruitt, a fourth-year anthropology and political science double major, ran the event through the Michael D. Young Internship Program, through which students are able to bring original, refreshing events to the UCSB campus. After receiving this honor, Pruitt immediately began thinking of the impact she could have on student life, and the Block Party was where her heart ultimately lay.

“UCSB students are constantly recognized for being leaders…in the classroom, but they are not necessarily given credit for their strengths outside of the classroom,” said Pruitt. “I wanted to create a space where students could cross boundaries, bridge the gap between the different clubs they are involved in, and show each other what they are a part of.”

In the Multipurpose Room, several students displayed their artwork of various mediums, from acrylic to watercolor paint and even photography. Kira Block, a third-year psychology major, received an email from Pruitt and thought the event would be a nice opportunity to display her paintings.

“It has always been a hobby for me. Whenever I’m stressed, I’ll paint,” said Block. Her artwork is a depiction of her own life–from a recreation of a book cover to a portrait of a surfer–and displays the pure, honest feelings from which she draws inspiration when painting.

“I take [art] classes here at UCSB whenever I can,” said Burrows. “I make time for it, do research for each of my pieces… I wouldn’t call it a hobby, I would call it a passion.”

Burrows, a fourth-year aquatic biology student, experiments with different mediums. For her most interesting piece, entitled “Niké,” she used both acrylic paint and Sharpie on plexiglass, and the entire piece was created in reverse.

“There are a lot of hidden messages in it, numbers and words, and things that only I know about…but it was inspired by the Niké statue at the Louvre, which is a work of art that most people would recognize,” said Burrows.

While admiring the works of art displayed along the border of the room, attendees watch a projected video entitled “Ho’oponopo,” which featured piano music composed by Heena Yoon, a first year Ph.D. student in the music department. Originally from Seoul, South Korea, Yoon submitted the video as part of her portfolio when applying to graduate school at UCSB.

“She originally contacted me wanting to play the piano live, but I told her that we didn’t have a piano here at the SRB. Still, I wanted to make this happen!” said Pruitt. Yoon was thrilled to see her own music being played in the makeshift art gallery; even though she did not get a chance to perform live, her composition added serenity and positivity to the atmosphere, and helped to “bridge a gap” between undergraduate and graduate talent. Among the live performers was Sebastianne Kent, a first-year environmental science student and musician. Kent sang a mix of original songs as well as covers, and played the acoustic guitar.

“I hope that people listen [to my music] with an open mind, but I try not to care so much about what people think, anyway,” said Kent, who describes her style as “folksy-singer-songwriter meets soul and jazz.”

Her cover of Weezer’s “Island in the Sun” gave the hit song a refreshingly indie vibe, and her last performance–an original song entitled “Atlas”–was unconventionally bluesy compared to the previous songs she prepared for the evening. According to Kent, this was purposefully planned, as she likes to leave her listeners with something unexpected.

The Creative Culture Block Party offered students of all backgrounds to come together and share their originality, charisma, and talent. The original music juxtaposed with quirky artwork made for an event worth attending.

“You don’t have to be in an organization to be involved with something–you can just do what you love,” said Pruitt.

Pruitt’s effort rightfully proved this. With hope, insight, and creativity, the event will surely become an annual occurrence for the alternative and mainstream scenes alike.