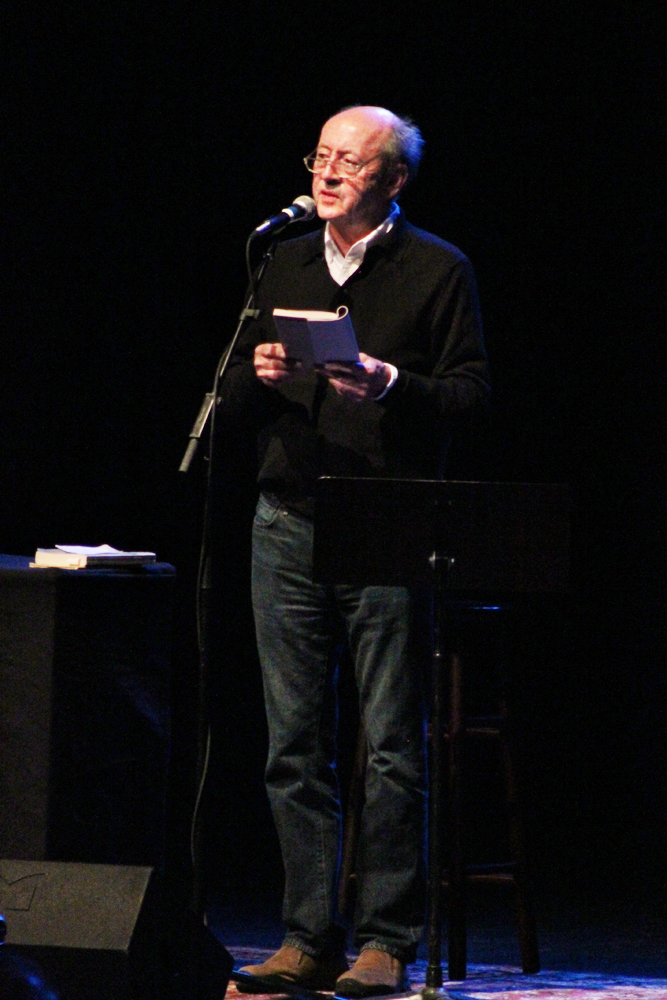 Former U.S. Poet Laureate Billy Collins and Oscar nominated singer-songwriter Aimee Mann collaborated for a night of words and music on Thursday, April 17, at Campbell Hall in an event put on by University of California, Santa Barbara’s Arts & Lectures. Despite it only being their second performance together, Collins and Mann worked exceptionally well alongside one other. The performers, including Mann’s bass player Paul Ryan, were very charismatic and kept the crowd entertained and laughing throughout the night.

Collins opened up the show with three poems about dogs: “Another Reason Why I Don’t Keep A Gun In The House,” “A Dog on His Master,” and “The Revenant.” The first and last poems were very comical compared to the emotional “A Dog on His Master,” which depicted the one- to seven-year ratio between humans and dogs.

A story about a man annoyed by his neighbors’ barking dog, “Another Reason Why I Don’t Keep A Gun In the House” had everyone laughing. The line, “and now I see him [the dog] sitting in the orchestra,” depicts how influential the little things, such as a barking dog, can be on our train of thoughts and imagination.

“A Dog on His Master”  seemed to be the most emotionally moving poem. Right after reciting the poem, Collins described the dog in the poem to be “the most sensitive dog he’s ever met” so far. Complementing Collins’ sentiments, Aimee Mann started off her performance with her song titled “Labrador,” describing a faithful partner called “the loyal Labrador.”

Toward the middle of the show, Mann performed her sorrow-filled hit song “Save Me,” which was featured in the film “Magnolia” and nominated for an Academy Award for Best Song in 1999.

The other laugh-out-loud poem, “The Revenant,” wrapped up the evening. The poem is written from a dog’s perspective after it is put to sleep, and starts of with, “I am the dog you put to sleep, as you like to call the needle of oblivion, come back to tell you this simple thing: I never liked you–not one bit.” Throughout the poem, Collins takes us on a journey through this dog’s mind, who confesses all that he’d ever wanted to tell his owner.

The collaboration between the poet and a singer-songwriter flowed extremely well. Collins would entertain us with his poetry, and when he finished, Mann and her bass player Ryan would perform their indie rock. Filled with great charisma, both Mann and Collins put on a very entertaining show that kept the crowd laughing and engaged throughout the performances.

Collins and Mann, who had their first show together the night before in Malibu, first met at a poetry appreciation event at the White House, hosted by President Barack Obama, in May 2011. According to The Press Democrat, when the two initially met, they had talked about performing together in the future. Now, three years later, Collins and Mann are on an intimate three-stop tour along the coast from Malibu to Santa Barbara to Santa Rosa.

After the show, the crowd showed their enjoyment with their claps and cheers, and Collins stayed to meet fans for a book signing.