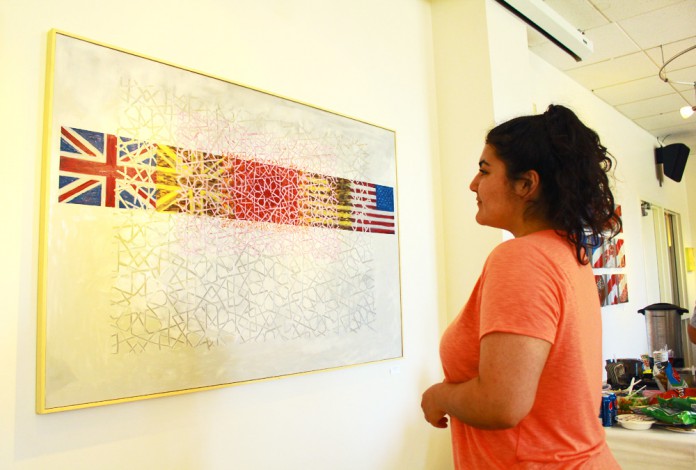 Doris Bittar’s art exhibit, entitled “Between the Stripes,” is grounded in the concept of multi-culturalism and identity in America by virtue of Bittar’s personal background as well as her own interests. The artist, writer, and professor at the California State University of San Marcos, gave a talk on Friday, April 18, at the University of California, Santa Barbara’s MultiCultural Center to discuss and answer questions posed by students and professors alike about her exhibit.

“Between the Stripes” features several acrylic paintings and one wall installation, all of which play on a theme of multi-culturalism. The wall installation, “Tec Sayings,” was created in collaboration with poet Diane Gage. Several velcro tiles are arranged in a pattern and are meant to be rearranged and repositioned by those who attend the exhibit.

The paintings, most of which are acrylic on canvas rendered in the renaissance style, are all centered around the American flag.

I found the most striking and provocative piece in the collection to be “Baghdadi Bride,” which featured an intricate, lacey design pulled from an Iraqi tile pattern as an abstract veil layered over the American flag. Bittar described it as “a quotation from a Jasper Johns painting,” an American contempary artist from the mid 20th century. She said she continually hallucinated about the image before bed every night after 9/11. Finally, she had to put paint to canvas in order to get the pattern and the flag out of her mind.

“When you mourn, you hallucinate, and the Arab culture was not allowed to grieve after 9/11,” Bittar said. “We were too busy defending ourselves.”

As for the patterns, “I cannot look at the flag without those filters,” Bittar said. “I think the patterns act as filters, barriers, revealers.”

The “Wandering Ishmael: Tour Amerka,” another of my favorites in the exhibit, was an exploration of Bittar’s personal identity before 9/11. It is a reflection on growing up in New Jersey, learning about what it means to be Middle Eastern, and attempting to educate others. The painting is an American flag of orange and green–colors which she found more welcoming than the real ones. It also features an image of her as a child, Wonder Bread, Arabic letters and numbers, and an image of the Empire State Building, which was close to where she lived. Bittar explained her fascination with patterns and history, as well as the lamentation over the death of multiculturalism and the need for its reclamation.

“I like that it’s capital M and capital C here, it does need to be re-created,” said Bittar, about the MultiCultural Center’s name. She talked about how we ignore multiculturalism, as if it isn’t a problem anymore and has been dealt with.

“We are still trying to reconcile history with the facets of our own identity and the anxieties that come from it,” said Bittar, elaborating that we need to reclaim and explore the concept of multiculturalism.

Doris Bittar’s art exhibit “Between the Stripes” will be on display at the MCC until Friday, June 13.