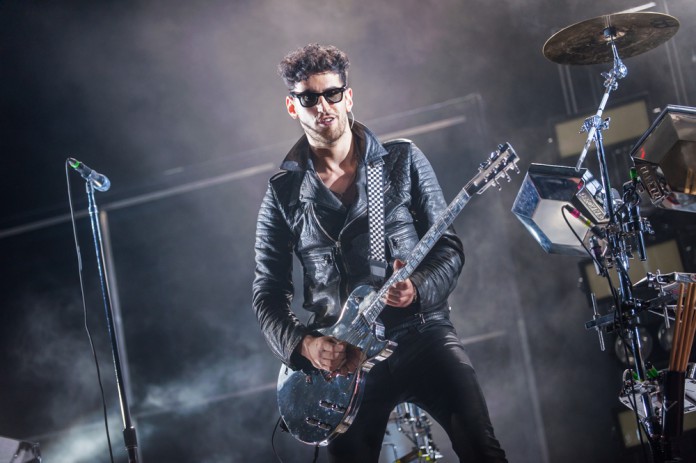 Overcast and with temperatures in the mid-80s, the first day of the Coachella Valley Music and Arts Festival’s Weekend 2 began with the perfect desert weather. But as always, I was sweating bullets and my hair was already up in a ponytail. My day started late, so I missed some acts I wanted to catch, like Flatbush Zombies, Anthony Green, and the Dum Dum Girls, but the rest of the performances were phenomenal nonetheless. Here are my top favorite acts from Day 1: In the last stop of their current U.S. tour, Australian electronic trio Jagwar Ma threw down psychedelic beats and made it rain bass at the Gobi Tent. The group is made up of Gabriel Winterfield (lead vocals, guitar), Jack Freeman (bass, back-up vocals), and the mind behind their flow, Jono Ma (producer, guitar, synthesizer, drum machine, samplers). But don’t let the their scrawniness and bucket hats fool you, their set had the crowd on their feet dancing and singing along.

Winterfield got jiggy on stage and moved obscurely, but his moves matched their glitch-ridden sound. Freeman thrashed his head around as if a million flies were attacking him, while somehow still making his bass purr. Even Ma got down with his machines, twisting knobs, pumping his fist, and throwing his hands in the air. They performed songs off their album “Howlin’,” including “Come Save Me,” “Uncertainty,” and “Let Her Go.” Los Angeles native Henry Laufer, better known as Shlohmo, opened his set by saying, “What the fck is good. This is a dream come true.” His lo-fi, trap, experimental tracks thundered over the Gobi speakers, and the low frequency sounds made my chest pound like a subwoofer, even making it hard to breathe at times.

Shlohmo performed as the sun was beginning to set over the Indio mountains, and his set included crowd favorites “Seriously,” “F*ck U All the Time,” and his latest single featuring Jeremih, “No More.” Of course, his record label’s iconic “We Did It” tombstone branded the middle of his sleek stage.

I made it to Outdoor Theatre in time for the last 20 minutes of Broken Bells, the alternative-indie rock masterpiece made up of Brian Burton (Danger Mouse) and James Mercer (lead singer and guitarist of The Shins).

The crowd was composed of both young and old attendees, making it a nice setting to either sit around the outskirts, dance without a care, or watch closely from the middle. Adding another dynamic to their stage of glowing lanterns was the screen art, which flashed from psychedelic black-and-white illusions to the red lantern from their self-titled debut album cover.

Mercer’s voice soared, sounding even cleaner in person than it does on vinyl. They played songs from their newest  album “After the Disco,” 80s rock style songs meant for dancing and rocking out. Toward the end of their set, Broken Bells performed “The High Road,” “Ghost Inside,” and “Perfect World.”

I was torn between Chromeo, Bonobo, and Nicolas Jaar: do I listen to my middle school and high school crush, David Macklovitch, and get funky? Check out Bonobo’s ambient, down-tempo electronica? Or do I go to the Yuma Tent for the first time and experience the world of underground deep house?

I wanted to dance to the night away; I decided to adventure to the darker side of town and see Nicolas Jaar. When I finally found the Yuma Tent, the bass leaking out from it was a nasty reverb of heavy bass. It was a garbage of sound and I wanted to get dirty.

Once I got into the tent (there was a long line), my first thought was, ‘Why I hadn’t been here before?’ The well-ventilated tent was a delight for the ears, eyes, and body: fresh air-conditioning; flashing red and white lights; and body thumping, unconventional electronic music. Nicolas Jaar was just what my soul was craving. Like old-school, underground jungle, I did not need to know what or who Nicolas Jaar was playing in order to enjoy the music–all I did was dance. Future-garage and deep house DJ and producer Flume, drew a crowd that trickled out of the Gobi. The overly packed house was treated to songs off his self-titled debut album, EP “Sleepless,” as well as remixes and edits. His set included “Holdin On,” “Sleepless,” “Insane,” a remix of Lorde’s “Tennis Court,” and his edit of Rustie’s “Slasher.” The crowd never stopped dancing to his upbeat tracks., going especially wild when he closed with his remix of Disclosure’s “You & Me.”