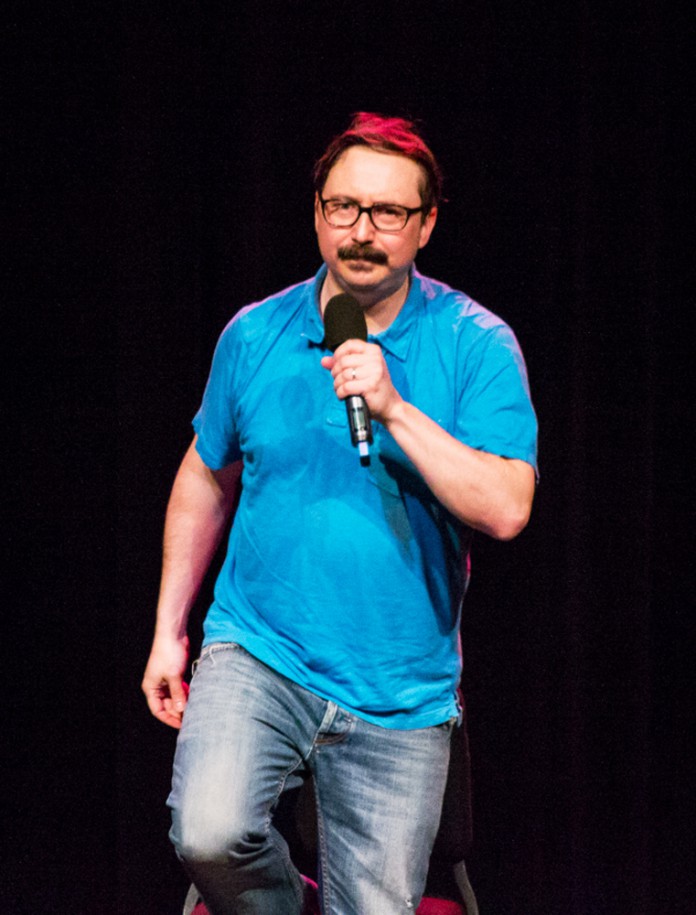 Known for his role as the Deranged Millionaire correspondent on “The Daily Show,” an expert on all things important to the one percent, Hodgman has been known to include this persona in past performances. True to this reputation, Hodgman began Tuesday night’s show walking out to the sound of pulsing dubstep and running through the audience while high-fiving everyone. When he finally reached the stage, he collapsed from exhaustion. “I forgot I had asthma,” Hodgman said, as he tried to catch his breath under his many layers of jackets. He then recounted stories about his childhood, career, and parenthood, shedding his old persona–one layer of clothing at a time–for a more human and vulnerable version: John Hodgman the person, the man with a wife and two children.

What followed was a surprisingly heartfelt series of vignettes that revolved around the themes of adulthood and trying to be up-to-date and meaningful in a world that is constantly changing. Hodgeman began by telling us the story of how he came to purchase his blue shirt, which he wore one night at a surf shop in Florida. The story then became a lesson on how being an adult meant not caring about your appearance, especially when trying to look cool.

These anecdotes and life lessons continued as Hodgeman told stories about his career. He recounted a time he was filming a pilot for a show and made a “Battlestar Galactica” reference to get the audience’s attention. When his producer friend gave him advice on whether or not to leave the joke, he learned that making a cultural reference is not the same as creating culture.

A particularly personal story recalled was a moment where Hodgman was watching “Downton Abbey” with his children, whom he referred to as his “cats” for the sake of not getting too sappy. He said he noticed “Downton Abbey” and “Upstairs Downstairs” were the exact same shows. This led him to realize that even if something great is created, people will forget about it and an exact copy of it will become even more famous.

Hodgman tied the show up by playing The Osbourne Brothers’ bluegrass song “Rocky Top” on ukulele. The song was a sweet and sentimental ending to a hilarious story about a party at a southern university in an alumni house where he was asked to perform a few years ago. This beautiful moment was immediately followed by Hodgman stripping down to his boxer briefs and asking an audience member to help zip him into a purple dress. This is where the night got wonderfully absurd.

Hodgman began impersonating the author Ayn Rand as if she were a columnist for Parade Magazine–all while still playing the ukulele to the tune of “We’re in the Money.” He started sing-speaking real quotes by Rand and followed them up with his own references to 80s pop culture, like Reagan, Fresca cans, “Caddyshack,” and “the little boy in ‘The Shining.’” He remained in character as the famed objective author throughout his performance. From the Russian accent to the purple dress and the ukulele, the resemblance to Rand was uncanny. It was an unforgettable ending, made greater by the fact that Hodgman remained in his Ayn Rand dress while signing books afterwards.

UCSB’s Arts & Lectures, who put on the event, is seeking a higher lock-in fee in the upcoming campus elections, which will take place from April 21 to 24 on GOLD. Heather Silva, Arts & Lectures Programming Manager, says the fees would go a long way toward helping ensure that the organization continues to bring quality artists and lecturers to UCSB and that ticket prices remain low for students. The fees would also help the development of a mobile phone application for purchasing tickets.

“If we could get a student [to attend] one ‘gateway’ event, even if it’s for a class,” she continued, “a lot of them come to a required event and then realize what a great experience it is and want to come back again.”