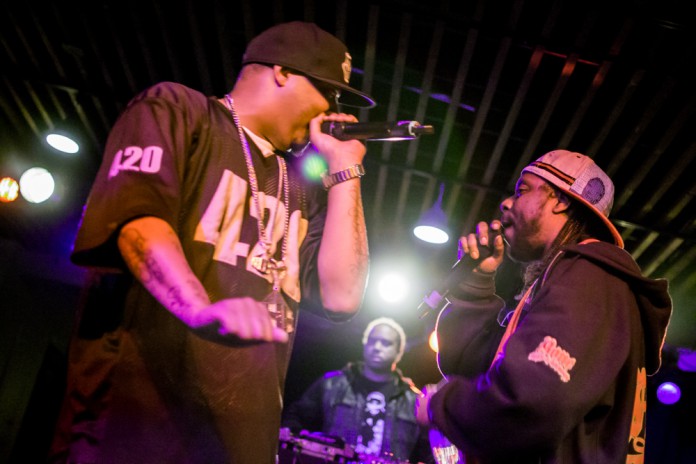 The Bone Thugs-N-Harmony concert, presented by University of California, Santa Barbara’s Associated Students Program Board on Thursday, Mar. 6, began with a long wait but left those who stayed satisfied.

Presumably a result of the pat downs at the entrance, the line into The Hub was dauntingly long. This was not helped by those attendees who decided that the back of the line was too far a walk and slipped in at various points along the queue, often employing the infamous chat and cut technique.

Once inside, the majority of the audience crowded around the stage, ready for a night of Bone Thugs-N-Harmony. Unfortunately they would be there for a while. The opening act, an energetic DJ who did a good job of getting the crowded hyped, started at around 9:30. Once the crowd was jumping, they got a spirited, “Are you ready for some Bone Thugs!”–which, of course, everyone was–and he exited the stage.

It was almost 10 p.m. when he left the stage, and the crowd was already chanting “Bone Thugs! Bone Thugs! Bone Thugs!” every minute or two in anticipation of the group walking on stage. At 10:35, someone came on stage and announced, “There has been a delay at the hotel and they should be here soon.”

The realization that the hip-hop group hadn’t even arrived to UCSB had a different effect on each group within the crowd. Depending on their state of inebriation, reactions varied from anger to doubt, as many wondered if they’d get their money back if the group never showed. Some people sat down, but a large group held out hope and used the opportunity to get closer to the stage.

The moment Bone Thugs-N-Harmony got on stage, the long wait and even longer delay became a distant memory as Krayzie Bone, Bizzy Bone, Wish Bone, and Flesh-n-Bone started into their set with “1st of tha Month.” At this point, those who had successfully snuck contraband through security partook in smoky celebration.

It wasn’t the longest set, but the Grammy Award-winning group knew what the people wanted. They quickly rejuvenated the crowd with some of their more famous tracks, mixed in with some classics from big acts they had collaborated with in the past.

As one of the few groups lucky enough to have worked with Tupac, Biggie, and Eazy-E in their history, Bone Thugs-N-Harmony had plenty to work with. Starting with “Boyz in the Hood” to set up Eazy E, the group played each artist’s biggest hit as an intro to their collaboration, which served them well in getting a rise out of the crowd. None were better at getting people excited than the timeless “California Love” by Tupac.

Near end the night, Bone Thugs-N-Harmony got everyone to put an “X” in the air for their most famous song, “Tha Crossroads.” The song was dedicated to those that the group had lost in all their 20 years as well as some choice others, including, interestingly enough, Whitney Houston.

There was no encore, but the students who stayed left happy. After over 20 years of performing, breaking up and getting back together more than a couple of times, the group had their performance down to a science. And even without Layzie Bone, Bone Thugs-N-Harmony could still bring it.