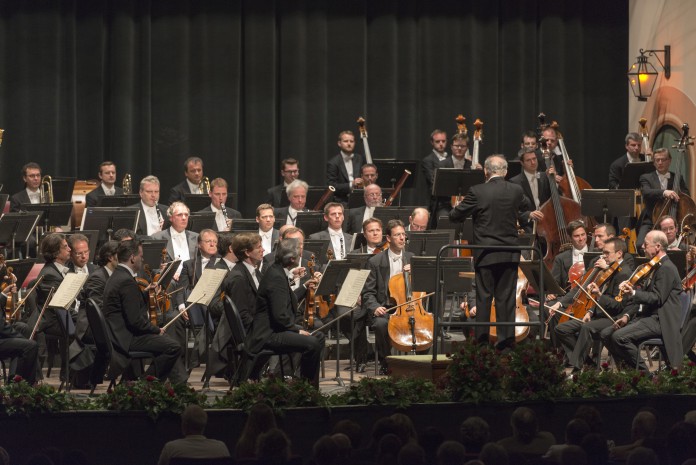 After two years, the University of California, Santa Barbara’s Arts & Lectures brought the Vienna Philharmonic Orchestra back to Santa Barbara for an encore performance, as part of a campaign event to contribute to the community. The 100-plus tailcoat-ed orchestra members and their instruments filled the stage of the Arlington Theatre on Wednesday, Mar. 5. Led by Grammy Award-winning conductor Lorin Maazel, the musicians performed Franz Schubert’s Symphony No. 8 in B Minor and Gustav Mahler’s Symphony No. 4 in G Major.

The Arlington Theatre’s magnificence, in its starry ceiling and high archways, almost seemed to diminish when permeated by the 170-year legacy of the Vienna Philharmonic Orchestra. Soprano Juliane Banse briefly accompanied the orchestra, which was composed of prestigious musicians on violin, viola, violoncello, contrabass, harp, flute, oboe, clarinet, bassoon, horn, trumpet, trombone, tuba, and percussion. The group effortlessly fused together as a unit, which is perhaps a result of its unique practice of democratically electing its administrators.

The concert began with Schubert’s dual movement “Unfinished Symphony,” broken into allegro moderato and andante con moto. Although it is usually known as one of Schubert’s shorter works, the symphony was transformed into a 45-minute performance by Maestro Maazel, who masterfully stretched and emphasized the notes of his choosing to create a new understanding of the music. Layers and layers were created as the orchestra left and returned to each theme with an undying loyalty, never letting the music falter or the spell over the audience break. The vigor with which Maazel conducted did not betray his 84 years of age for a second.

The main hall was occupied mostly with Santa Barbarans old enough to not immediately take out cell phones at intermission, who fluttered about socializing and greeting old friends, while the balcony seats were packed with students. When the conductor stepped onto the stage, the theater dropped into a dead silence that did not lift until the conductor indicated applause was allowed, the usual formality expected at a classical concert of this caliber.

Keeping in theme with European classics, the orchestra moved energetically into Gustav Mahler’s Symphony No. 4 in G Major, which concerns itself with a child-like view of heaven. The first three movements of the piece are created by the orchestra alone, and the fourth includes a soprano. The wind instruments and the harp were very distinct in this piece, in accordance with its celestial topic. The theme of heaven was clarified in the fourth movement by Juliane Banse’s impressive vocals. She inserted the German lyrics of “Das himmlische Leben” (“The Heavenly Life”) in the style of opera, and the music reacted to and supported her words. Her gesticulations, impressive range, and tones seemed to tell a story that only the music and those familiar with the song could understand.

The audience stared in glazed-over amazement as the string section artfully handled their bows with small precise movements that morphed into sweeping synchronized dances. Most notably, the flute solo in the second movement of Mahler’s piece vigorously represented demonic influence in the otherwise heavenly invocations of the symphony. The music took on a life of its own and created a complex dialogue as the instruments responded to and interacted with one another.

Whether a connoisseur of classical music or a student lured to the concert for class credits, all who attended were delighted by the undeniable talent and finesse of the Vienna Philharmonic Orchestra.