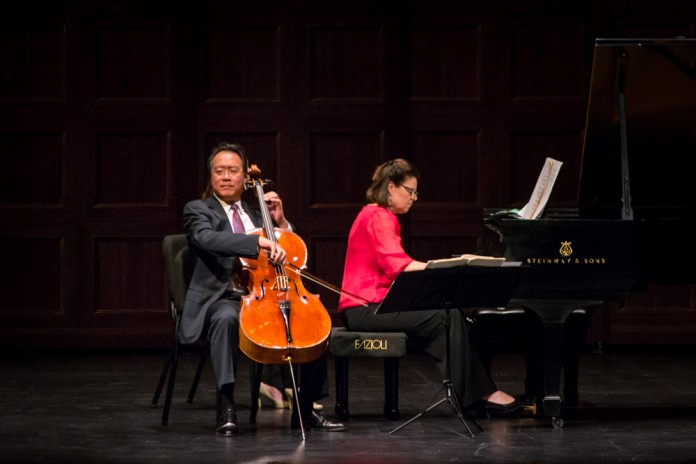 Yo-Yo Ma and Kathryn Stott mesmerized the audience of the Granada Theatre on Thursday, Mar. 13, in a sold-out concert presented as part of University of California, Santa Barbara’s Arts & Lectures’ “now and forever” campaign. As a special treat, Ma also conducted a master class for UCSB students the next day in the Lobero Theatre on Friday, Mar. 14, also put on by Arts & Lectures.

Born in Paris to Chinese parents, Ma is one of today’s most well-known cellists. This dedicated musician has traveled the world as a soloist as well as with chamber ensembles. He has received numerous prestigious awards, including the Presidential Medal of Freedom in 2010. Ma’s discography consists of over 90 albums, including 17 Grammy-Award winners. He works to increase the opportunities that audiences have to experience music in their communities around the world, focusing on the transformative power that music can have on individuals’ lives.

Ma and British pianist Stott have been musical partners for over 30 years. Currently the artistic director of the Manchester Chamber Music Society, Stott has performed as a concerto soloist throughout Britain, across Europe, and in Hong Kong, Japan, and Australia. Stott also has longstanding musical partnerships with Christian Poltéra, Natalie Clein, Guy Johnston, Valeriy Sokolov, and Noriko Ogawa.

On Thursday night, not one seat was empty in the Granada–but very few of them were taken up by persons under the age of 30. I was surprised, since student tickets were only $25.

All my fleeting thoughts concerning the audience fluttered away when Ma and Stott stepped on to the stage and strung out their first notes. I am pretty sure I had goosebumps throughout the concert, as their sound was incredibly smooth and powerful.

The first piece they played was “Suite Italienne” by Igor Stravinsky. I have heard many solo cellists perform, but never have I heard musical phrasing as subtle yet full of temper as Ma’s. Part of his talent lies in his incredible ability to convey every emotion, ranging from the deepest sorrow to giddy happiness to full-blown determination.

After especially vigorous passages, a few of the horse hairs on Ma’s bow broke, so he nonchalantly picked them off between notes. Generally, he and Stott played effortlessly, as if the music and instruments were extensions of their bodies and minds. The two played extremely well together, like old friends–surely a benefit of their longstanding musical partnership.

While they played Messian’s “Louange à l’eternitè de Jesus,” I remember thinking that if I could spend the rest of my life at this concert, I would. The rest of the audience seemed to share my enthusiasm, giving the duo a standing ovation long enough to bring them back for an encore.

As customary, Ma and Stott received big, beautiful flower bouquets after the concert, but then they did something I have never seen before: they threw their flowers into the audience.

UCSB Chancellor Henry Yang, a member of the large audience, summed up the performance as “music from Heaven.”