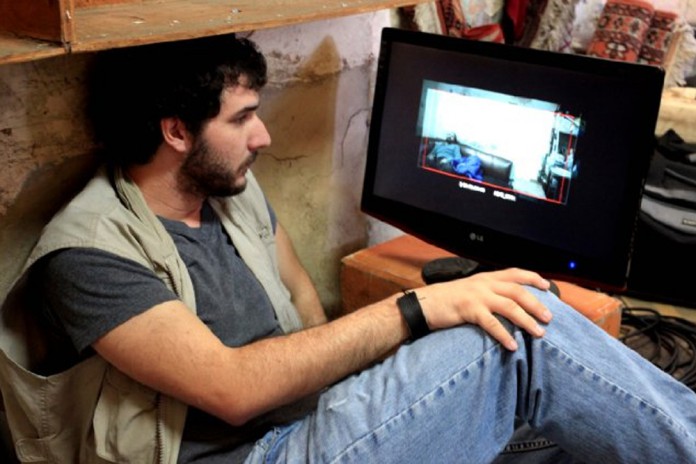 When both your parents are filmmakers, you are bound to be born with an eye for beauty and a knack for storytelling. When Joel Novoa was a boy he used to help his filmmaker parents with behind-the-scenes footage. This was his initial introduction to the world of film, and he quickly fell in love with it.

Though he studied to become a lawyer in his home country of Venezuela, Novoa never abandoned his dream of becoming a filmmaker. He would make short films while studying law, and one of his shorts got him into the renowned American Film Institute (AFI).

Novoa recently premiered his first feature film, “Esclavo de Dios” (“God’s Slave”), at the 29th annual Santa Barbara International Film Festival. Winner of The Nueva Vision Award, the film has been well-received by many. “Esclavo de Dios” is a thriller about a Muslim and Jewish extremist, based on real events surrounding the 1994 suicide bombings in Buenos Aires, Argentina.

Novoa became interested in doing a film about fundamentalism after the 9/11 attacks. Spawned out of a deep curiosity for the cover lives of the attackers, Novoa developed a strong interest in making a film that explored the personal stories of these characters. Novoa was 8 years old when the bombings in Buenos Aires happened. It wasn’t until years later, while making a short film in Argentina, that Novoa realized this was a story that needed to be told.

Making a fictional film inspired by real events is a difficult undertaking, especially when dealing with such a jarring topic.

“We knew it was going to be controversial even from the beginning,” said Novoa. “The best way to approach it was to keep it on a universal level. We wanted to do a movie about tolerance and not so much about political issues… We basically focused on the human being.”

Novoa spent many years researching the topic and those it affected. Keeping in constant communication with family and community members affected by the bombings as well as lawyers involved in the case, Novoa was able to find a balance between depicting a factual story while using fictional characters.

“The first thing [to keep in mind] is that this is something that killed 85 people so you have to be respectful to the family members… We tried to be as consistent to the investigation as possible, then from there we started creating fictional characters inspired by this investigation,” said Novoa. “We never wanted to draw too much away from [the facts], but at the same time we didn’t want to make this like a documentary, so what we tried to do is always keep the personal story first, in order to tell a story that could be entertaining and not just informative, so it was a big challenge.”

The film first premiered in Venezuela, where Novoa faced some obstacles. The Venezuelan government forced Novoa and his team to impose a 15-minute short film before the movie. A pro-Palestinian short film was screened right before “Esclavo de Dios,” creating confusion for audience members.

“The problem was, that the documentary was not properly identified–the audience did not know that it was separate from my film,” said Novoa. “They thought it was the film and some audience members began leaving the theater.”

Novoa sent a letter asking for appropriate identification of the short film, but he was denied due to the fact that it was against the law. Novoa wanted to take the movie out of theaters, but because of his contract with the distributors he was not allowed to remove the film. His only weapon to help spread the word about the two different films was the press. Meanwhile, a few radical attendees were causing fights in the theaters.

“It was really problematic,” said Novoa.

Despite all the obstacles, the 27-year-old director is starting to make a name for himself in the industry. Novoa was recently named as one of the top Latin American talents to watch out for by Variety magazine.

“I think we are all influenced by where we grew up… I feel that I can connect with the Latin American culture really well,” said Novoa. “I consider myself an international filmmaker; my goal is to shoot a movie in every place in the world before I die.”

Novoa accredits the core message of his film to a well-known Mahatma Gandhi quote.

“An eye for an eye makes the whole world blind,” said Novoa. “This is a movie about putting yourself in the shoes of what you’re not used to, or what is opposite to you, and I think that when we don’t do that we end up just getting revenge for something that happened to us and that revenge, ends up bringing more harm”

“In my opinion, we need to think a lot more collectively, and I think that the film speaks to that,” he continued.

Look out for Novoa as he embarks on future projects. He is currently working on “ID2,” a sequel to Philip Davis’ 1995 film “I.D.”