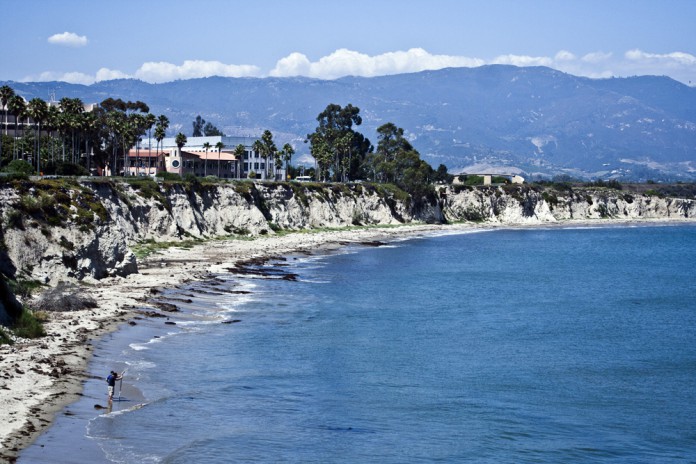 Imagine Goleta Beach, the most popular park in all of Santa Barbara County. Now imagine that park without a beach. This sad thought is actually not far from becoming a reality, as there is an unpermitted rock wall located on the west side of the park that is threatening the complete erosion of the sandy beach in front of it. This revetment was placed in front of parking lots 6 & 7 and an area of lawn as an emergency procedure in 2002, and it has now become a danger for the beach itself and the organisms that use it.

Beach armoring structures like these are widely known to cause detrimental effects to beaches, as found in case studies conducted in New Jersey and South Carolina, according to Michael Walther of Coastal Tech. Additionally, a study of beach width and climate oscillations along Santa Barbara’s coast line scientists found “significant narrowing of beach widths over the 70 year record were observed at 77% of the transects intersecting shore protection structures,” according to Revell and Griggs, earth science researchers from University of California, Santa Cruz.

There is hope for Goleta Beach, however, in the form of a proposed project called Goleta Beach 2.0. Spearheaded by The Environmental Defense Center and Santa Barbara Surfrider, the park reconfiguration project aims to save the beach and move critical park facilities out of the erosion zone.

Under this project the adverse rock revetments will be removed and the parking lots and lawns behind it will be relocated. In addition, utilities and sewer lines will be transferred out of this critical zone as to prevent a sewage spill, and the bike path will be repositioned.

There is some opposition to this proposal, including the concerned citizens group, Friends of Goleta Beach. The organization claims, “Rock revetments [are the] best way to save park from erosion,” and they deny the existence of any scientific evidence to the contrary. The group’s main goal is to save the lawn, picnic tables, and parking lots from eroding away into the sea; however, Goleta Beach 2.0 maintains that the parking lots being removed will be replaced and added to, any lost lawn acreage will be replanted in a different locale, and the picnic tables will be relocated as well.

Still, even if some lawn was lost and more of the beach was maintained, this would still align with the desires of the community.

“Recent surveys demonstrate that more people use the sandy beach,” states the Environmental Defense Center in a comment letter to the Santa Barbara County Planning Department. “The increase in sandy beach area offsets any potential loss in turf.”

The beach is not only an important park attraction, as it also serves significant biological and mechanical purposes. Goleta Beach acts as a refuge for shore birds and upper intertidal organisms, and even as a spawning ground for California grunions. Additionally, the beach serves as one “sand box” in a string of beaches along the coast, which depend on each other for sand transfer by waves.

“As each sand box fills, it traps sand. Once full, sand cascades downdrift making it available to the next sand box. When this sand box is interrupted, or reduced, then the downdrift box closest to the impoundment begins to erode,” reports environmental consulting firm, Phillip Williams and Associates LTD.

There will be a Board of Supervisor’s hearing on this issue on March 18. Many concerned citizens, students, professors, and organizations will be attending in support of both alternatives.

To learn more and to advocate for Goleta Beach 2.0, visit the Environmental Defense Center at http://www.edcnet.org/learn/current_cases/goleta_beach/index.html.