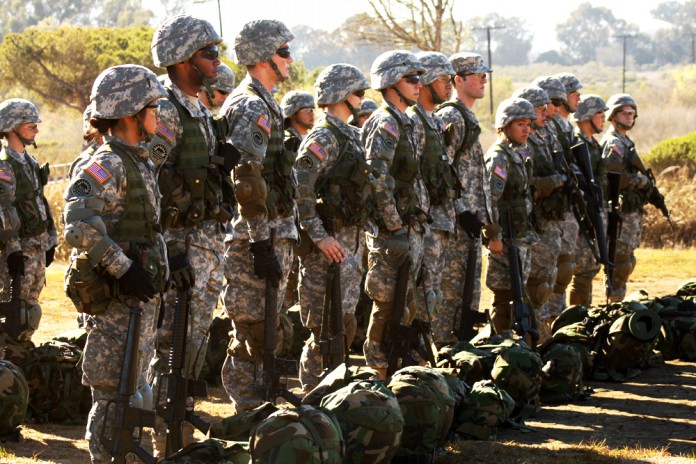 From a glance at the soldiers donned in their camouflage-printed army combat uniforms and assault packs, armed with incredibly realistic rubber M16 guns, you’d think that the field behind El Colegio was indicative of a war zone. In reality, it’s just another day of training practice for the Surfrider Battalion cadets of University of California, Santa Barbara.

UCSB’s Reserve Officer’s Training Corps (ROTC) program trains its student cadets to become officers of the U.S. Armed Forces by providing them with the skills necessary to pursue a career in the military. Through rigorous training, cadets are equipped with educational opportunities, physical stamina, leadership skills, and hands-on experience.

“We stress the army values of loyalty, duty, respect, honor, and integrity,” said Master Sergeant Todd Manes, the Senior Military Science Instructor. “We prepare them to be future leaders for the army.”

There’s no doubt that the cadets will be well trained upon completion of the program, for they follow a rigorous weekly schedule. Cadets are required to take military science courses, in which they learn leadership skills, small unit tactics, land navigation, as well as other military strategies. Then, they practice what they’ve learned in the classroom out on the field for four hours, and also undergo intense physical training beginning at 6:30 a.m.

All of these trainings are organized by the 10 MS4s: senior cadets who collaborate together to ensure the first-, second-, and third-years are obtaining as much as they can from the program. Everything is supervised by Sergeant Manes and Lieutenant George Davis, the department chair of military sciences.

“We conduct everything similar to how the military does,” Manes said. “The only difference is that the cadets who are running it are also students. We run it the same way as the military; it’s just that we’re a university and we’re just training them, instead of the unit actually being operational.”

The dedicated MS4s put in at least 30 hours a week into their work, and they treat their positions like full-time jobs.

The highly demanding program cultivates time management, teamwork, and leadership skills, all of which can benefit the cadets’ social and academic lives. MS4 Matthew Tweed, a fourth-year global studies major, has found these assets extremely beneficial not only as a cadet, but also as a student and a musician.

“It teaches a lot of time management and backwards planning,” Tweed said. “Schoolwork definitely applies to that. We learn how to watch our time between our social lives, studying, and ROTC. Also, I’m in a band, so I often find myself getting a group of people together and working with a team.”

The Surfrider Battalion is now one of the top units in the nation and continuously builds strong cadets through its rigorous program.

“It’s been challenging and very developmental,” Tweed said. “You really learn a lot of good professional development techniques and ways to work with the team. What we focus on here is leadership, and I’ve had a lot of opportunities to lead my peers.”

“It’s very demanding, and I’ve met a lot of people and learned a lot of values,” said Cadet Jessica Ma, a third-year global studies and Chinese double major. “I learned a lot of things and have done a lot that I wouldn’t have gotten a chance to do otherwise.”

Not only is the Surfrider Battalion nationally ranked because of its military excellence, but it also offers its cadets international internships and volunteering experiences overseas. The cadets also collaborate with other UCSB organizations in order to benefit the student body, as is the case with the upcoming beach cleanup with sorority Rho Psi Eta and the Gaucho Gala they’ll be hosting.

UCSB’s ROTC program is currently looking for qualified students for the next school year. For more information, please visit www.milsci.ucsb.edu