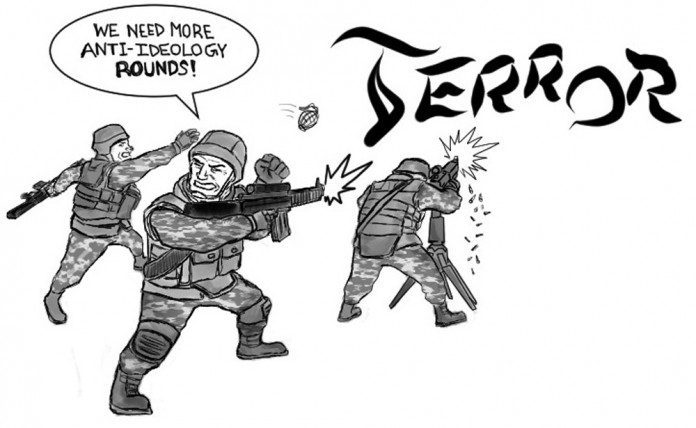 After over 12 long, difficult years of war, 2014 is expected to be a significant year in the U.S.’s drawdown of troops from Afghanistan. This arm of a protracted struggle against terrorism represents the latest reiteration of a post-World War II American tendency to wage war on more abstract enemies than concrete ones. In the 18th century, we saw Americans fight the British, and in the 1940s the Axis powers. But since World War II, the enemies have become less tangible; for the longest time afterward we fought communism and, since 9/11, terrorism. While there have been physical opponents on the other side of our recent wars–Viet Cong, al-Qaida–the United States has focused its attention more on battling their ideologies. This ideological focus is evidenced by the drawn-out fighting accompanied by rather vague end strategies and terms like “containment” and “War on Terror.”

In the minds of many Americans, however, another abstract battle is being waged by our troops: that in defense of our freedoms. During his recent State of the Union address, President Obama stated that, “because of the extraordinary troops and civilians who risk and lay down their lives to keep us free, the United States is more secure.” He told the story of Cory Remsburg, who, on his 10th deployment, was nearly killed by a roadside bomb in Afghanistan, leaving him with terrible injuries and disabilities. While Remsburg is a quintessential example of a hero, he was not actually fighting to maintain our freedoms, but to combat terrorism.

Though much of the military’s efforts nowadays still help to prevent terrorist attacks on U.S. soil, they are no longer defending all the freedoms and rights we presently enjoy. Terrorist attacks do not, as horrific as they are, constitute a loss of freedom. Rather, they are generally retribution for actions and culture that the perpetrators despise; they are not a real or viable attempt to systematically repress us, the American people. We are still able to speak our minds, vote, and bear arms. We would be in danger of losing our freedom if there were a legitimate threat to take over the government and repress us or to wage a war on our soil. The chances of these things ever happening are rather slim, however, and the more abstract war that American troops are now fighting is not in defense against these particular threats.

One can still argue that our troops indirectly protect our freedoms. Without a military, there would be a much greater incentive for groups such as al-Qaida to legitimately come in and attempt to force their way to power here and impose restrictions on us. The military’s existence, then, is some form of assurance of our freedoms, but only in this very basic way. Our military does not have to deploy troops to another country to provide this assurance.

We no longer fight people trying to repress us, but people who, by their own efforts as well as our own, have been defined by, and are often only seen as, their ideology. The wars we now fight focus heavily on eliminating or containing radical fundamentalism and often supplanting it with the freedoms and western mindset that we have in the U.S. Because of our need to be at direct odds with something, terrorism has replaced communism, which had replaced far less abstract enemies as our target. The effect has been that we are fighting battles that our freedoms don’t hinge on.

While preventing terrorist attacks helps save lives here–our freedom to live, one might say–the other freedoms people often think of when discussing the military are not affected. The bravery and strength of American troops are obviously admirable, but we need to realize the actual connection between them and the continuing existence of our freedoms. If we can finally bring home the rest of our troops in Afghanistan this year, we should greet them with appreciation for their attempt to stabilize and help that country and not risk perpetuating the idea that their current mission is vital to our freedoms.

Changing our military discourse to better reflect reality might not paint the military in as glorified a light, but it might help to ease the societal pressure on the still-patriotic Americans who just don’t view the institution with near-religious adoration. Having the proper perspective should help bridge the gap between Americans who view the military indifferently and those who embrace it enthusiastically. Everyone appreciating it from the same, accurate viewpoint will mean less tension and fewer instances of accusing each other of being unpatriotic or ungrateful. The military’s roles overseas have often been controversial since the turn of the century, and a better understanding at home of what our troops do for us–something that we should strive for in and of itself–could benefit us in knowing how to better interact with the rest of the world.