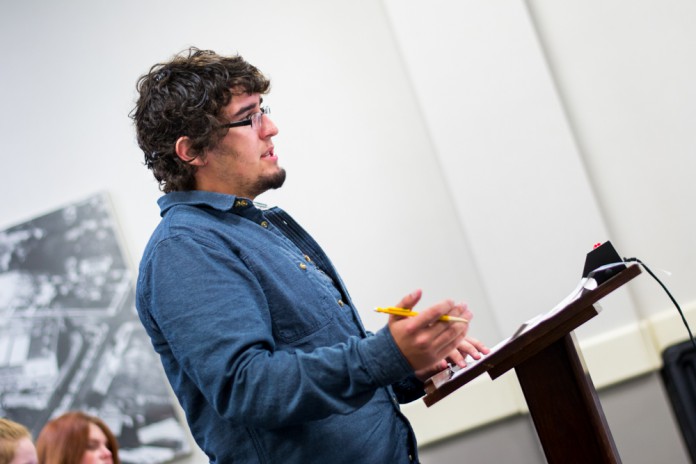 Associated Students Senate mitigated concerns about the recently passed “Bill to Create a Standing Policy to Regulate Expenditures on Food at Meetings” and heard a presentation about new online education at its meeting on Wednesday, Jan. 29.

Numerous AS boards, committees, and commissions (BCCs) either presented at the meeting or had their concerns read to the Senate regarding the bill, which limits the use of student fees in purchasing food for BCC meetings, though allowing for a few specified exceptions. These exceptions include events or programs, one banquet per quarter for voting members, and general meetings whose attendance is expected to exceed 75 students. In any case, the bill limits quarterly food expenditures to a total of $500.

Third-year Navkiran Kaur, Golden Pacific Region Chair for the United States Student Association (USSA), was the first to voice her discontent with the bill during her report that evening.

“[It] definitely screwed over a lot of students who depend on that food,” Kaur said. “I mean, it is coming from student fees, and I think students deserve to be fed with their own student fees.”

Kaur’s disapproval stemmed mainly from worries that the ban would deprive low-income students of an important source of sustenance that they might not otherwise receive. She noted also that the bill could severely hinder BCCs such as AS Food Bank, whose primary functions revolve around food.

Six members of AS Community Affairs Board (CAB) attended the meeting to present their various objections to the terms of the bill. They conveyed to the Senate how various programs, such as those orchestrated by the Child Care and Hunger/Houseless divisions of the organization, will be adversely affected by the budgetary restrictions.

It was also noted that much of CAB’s food is purchased at the Isla Vista Food Cooperative, meaning the student fees being spent are put back into circulation within the student community. A contract that CAB and several other BCCs have with the co-op regarding the organizations’ purchase of gift cards is now in violation of the bill.

CAB co-chair Kaitlyn Christianson gave the last of these testimonies, at which point she implored the Senate to communicate more effectively with the BCCs they are assigned to oversee.

“The fact that this bill passed, I think, means a lot of the BCCs are in the dark,” Christianson said. “This is affecting BCCs on a huge scale.”

Other organizations, such as the AS Isla Vista Community Relations Committee and AS Coastal Fund, expressed their concerns in the form of letters read to the Senate by various presenters.

AS Attorney General Sawyeh Maghsoodloo recommended making semantic revisions to the bill in order to correctly reflect the authors’ intention and to avoid too heavily restricting BCCs who depend on food expenditures. As currently written, she said, the bill imposes the $500 cap on all AS entities, which is not necessarily in keeping with the authors’ original premise of restricting only those BCCs whose spending is considered excessive.

Though the bill’s first author, On-Campus Sen. Andrew Neiman, was not in attendance, co-author and Off-Campus Sen. Jimmy Villarreal agreed that clearer language must be incorporated into the bill’s existing terms. This led the Senate to approve the creation of an ad hoc committee devoted to the examination of food policy later in the meeting.

External Vice President of Statewide Affairs Alex Choate gave a report that evening about the recent meeting of the University of California Regents, during which she touched upon a project called the Innovation Learning Technology Initiative. The initiative involves a website for UC students allowing them to take classes online that they may not be able to fit into their regular school schedules.

These classes will likely implement forums that allow students to interact with the professor as well as their classmates in order to still facilitate human interaction similar to that experienced in a live instruction setting. According to Choate, the Regents see this form of online education as a positive reinforcement to the education students receive through their live-instructed classes.

“The Regents have made it very clear that they want to use it as a supplement rather than a substitute for education, which is great,” Choate said.

Another significant presentation made that night was the proposal by two students of a mobile application that would better publicize campus events, including those put on by AS, and consolidate them into a single campus calendar that would include a map depicting their locations. Additionally, AS President Jonathan Abboud announced the passing of the SURF Initiative Referendum, which will put the plan for construction of a new University Center into motion.

That evening, Senate also passed “A Resolution to Approve the Creation of an AS Strategic Plan,” which will allow plans to be put in place for more efficient transition of AS projects between academic years, and “A Bill to Update the UCSB AS Elections Code,” by consent, which was tabled at its previous meeting.