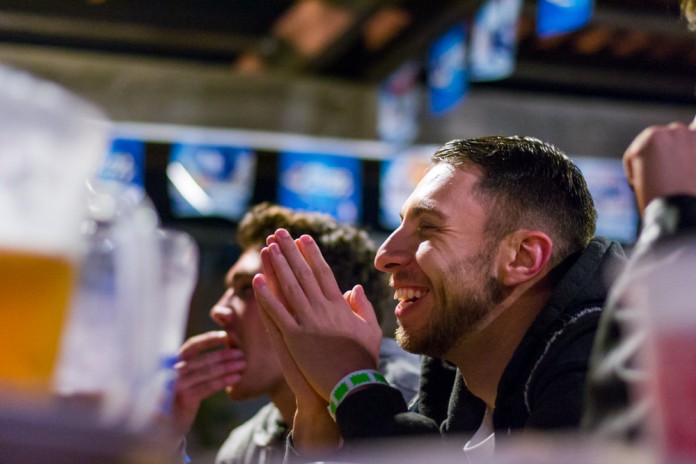 Giovanni’s Pizza’s outdoor patio was packed with an intimate crowd of students and locals who gathered on Wednesday, Feb. 12, to enjoy a night of live entertainment from the community’s talented musicians, spoken word artists, and stand-up comedians. Hosted by Associated Students Program Board, this was the second Gio’s Open Mic Night of the quarter.

The atmosphere was abuzz with laughter and good vibes. Groups of friends conversed at the restaurant’s iconic picnic tables with pitchers of beers and plates of complimentary cheese pizza, while artists performed at a tiny makeshift stage right underneath a row of Bud Lite flyers.

Colton Saylor, an English graduate student, opened up the event with his acoustic guitar and harmonica act. He sang his original folksy song “Boulevard Square” with a drawling voice accompanied by mellow guitar tunes. He also sang his original song “Get Clean,” which is an eccentric mishmash of random scenes, images, and historic figures—primarily inspired by Walt Whitman and Emily Dickinson.

“’Get Clean’ involved a bunch of little stories,” Saylor said. “I like to piece together stories to make a big picture.”

Talented musicians continued to charm the audience throughout the night, such as when Andrew Robbins sang his romantic love song “Michelle.” He said he wrote it for his girlfriend, leading to a chorus of “awwwww”s from the majority of the female audience members. Michael De Maria, a second-year political science major, also won everyone over with his lively performance of “You’re My Baby” by Roy Orbison. His singing was joined by enthusiastic clapping from the crowd.

A jaw-dropping musical performance was delivered by the duo of second-years Rod Gomez and Dalia Juarez. They had only been performing together since the start of the school year, but what they lack in experience is undeniably compensated for by their dedication. Gomez’s skillful guitar-playing and Juarez’s passionate delivery of Ed Sheeran’s “Give me Love” (joined by first-year Mia Jimenez) and Of Monsters and Men’s “Dirty Paws” produced one of the most memorable performances of the night.

“I really like performing,” Juarez said. “It’d be good to get out there.”

Another unforgettable performance was Ian Davis’ stand-up comedy act. The third-year English major and aspiring professional comedian induced roaring laughter from the crowd with his quick wit and collection of humorous anecdotes.

“I hate the dentist,” Davis passionately declared. “I don’t like the dentist because no matter what I do, it’s never good enough for him. It’s like, if you’re not driving, you have to be flossing all the time.”

Davis humorously and vividly divulged into stories addressing his homosexuality, from an interesting date to an experience at Chick-Fil-A.

“So, I recently continued being gay,” Davis said, met with fierce applause. “No need to applaud, it’s not like I accomplished something,” he joked.

Many stand up comedians continued the show, and another impressionable comedian was Ben Sterne, a first-year pre-mathematics major. His act was full of one-liners rapidly delivered right after another. Judging from his stellar performance and the roaring laughter, one would never have known that he only started performing stand-up comedy a few months ago.

“You know those people who are too good for the default font on Microsoft Word? You know, those who need Georgia or Gibson…,” Stern said.

“And those people who say their favorite color is burgundy—no, it’s dark red,” Sterne added on sarcastically. A string of talented performers continued to entertain the audience for the rest of the night.

Not only did Gio’s Open Mic Night unite a diverse community of artists and students, but it also gave up-and-coming performers an opportunity to express themselves and forge their way into the music scene. Through a night of music, poetry, and jokes, members of Isla Vista could de-stress from midterms and studying.

“It really brings the community together,” said AS Program Board’s Production Coordinator Sean Nolan, a fourth-year English and philosophy major. “I feel like it’s a great opportunity for people to come out.”

“It’s a good mix of people who have talent, but who don’t usually have the outlet to show it,” said Nicholas Balestrieri, a second-year communication major. “This is the perfect venue for that.”