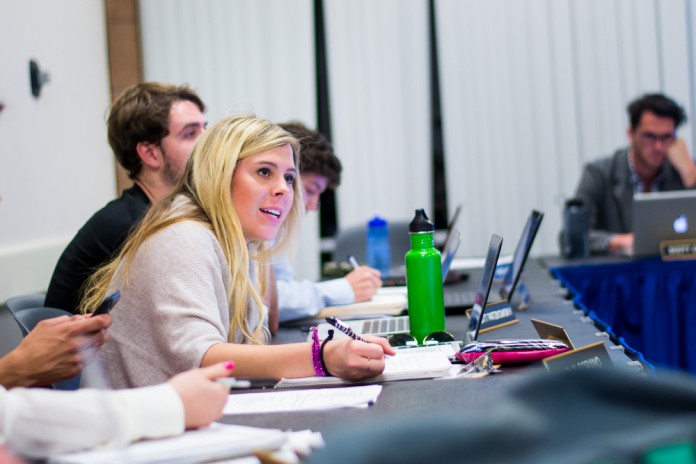 Associated Students Senate learned about a new multi-use development pending approval in Isla Vista and discussed the potential impact of marijuana legalization on California’s higher education system at its meeting on Feb. 12.

“A Resolution Supporting the Taxation of Marijuana to Fund Higher Education,” authored by Off-Campus Sens. Jimmy Villarreal and Derek Wakefield, was inspired by an event put on by the office of the University of California, Santa Barbara External Vice President of Statewide Affairs (EVPSA) during the week of Feb. 3 to 7, called “Week of Revenue.” The purpose of the event was to raise awareness about financial difficulties faced by public universities and their student populations. The third day of the event, “Weed Wednesday,” promoted the legalization and taxation of marijuana in California, with revenue allocated toward higher education.

On the event’s last day, a panel of elected officials consisting of Congresswoman Lois Capps, California Democratic Party Secretary Daraka Larimore-Hall, California State Assembly Member Das Williams, and California State Senator Hannah-Beth Jackson gathered on the lawn of the UCSB Student Resource Building to discuss various issues pertaining to student debt and the financial state of public education. EVPSA Alex Choate noted during her weekly report to the Senate that all except Capps voiced support for legalization and taxation of recreational marijuana use, should the resulting revenue be allocated toward educational funds.

The senatorial resolution cites several monetary statistics pertaining to the marijuana market, including its statewide cash crop value of $15 billion, as well as an alleged $400 million in revenue to be gained from its taxation. In his introduction of the resolution, Wakefield also touched on the burden marijuana-related crimes put on impacted factions of the state, such as prisons.

“[The resolution’s points] essentially outline how the effects of marijuana have not been proven to be nearly as dangerous as other Class I substances,” Wakefield said. “It’s also mentioning how a huge number of our inmates in the prison system, especially in California, are incarcerated for nonviolent drug charges.”

The resolution passed in a matter of a few minutes with a 15-3-6 vote. However, Off-Campus Sen. Montana Maclachlan later motioned to reconsider this decision. The motion failed, but after further discontent was expressed, a motion by Off-Campus Sen. Andre Theus was passed in order to allow discussion on the issue to resume.

“In the past, I feel like Senate has not always been so eager to take stances on something that is so controversial across the globe,” Maclachlan said. “I think it’s important to remember that we represent a lot of constituents at this school…before we really go into a vote about it, I think that’s something that needs to be very highly considered.”

Despite these and other concerns vocalized by senators, the decision to pass the resolution still stood as a result of the failed motion to reconsider it.

Earlier in the meeting, External Vice President of Local Affairs Alex Moore recounted a meeting he attended of the South County Board of Architectural Review (SBAR) regarding the proposed development of a new multi-use building dubbed “The Nest.” The LEED-certified building, whose fusion of upscale apartments and commercial space would mirror the composition of buildings such as the LOOP or ICON, would be developed at the site of what is currently Dublin’s Sports Grill, Precious Slut Tattoo Company, and Campus Cuts.

Moore reported that SBAR has reviewed the initial building plan and is scheduled to make a site visit in March, at which point it will also give a public presentation on Isla Vista in general. He hopes that this venue will offer an opportunity for students to demonstrate an interest in the project, whether or not they approve of its continuation. As a representative of student interests, he has already begun trying to get a sense of campus-wide opinions.

“There were some very dismissive things that students said, but I do my best to promote the healthy student perspective,” Moore said. “There are opportunities here for us to collaborate.”

That evening, the Senate also passed “A Bill to Raise the Short-Term Emergency Loan Cap” by consent, after tabling it the previous week. It also resolved to officially initiate a collaborative project with the student developers of TeemUP, a mobile application aimed at allowing more efficient event coordination and publicity across campus.