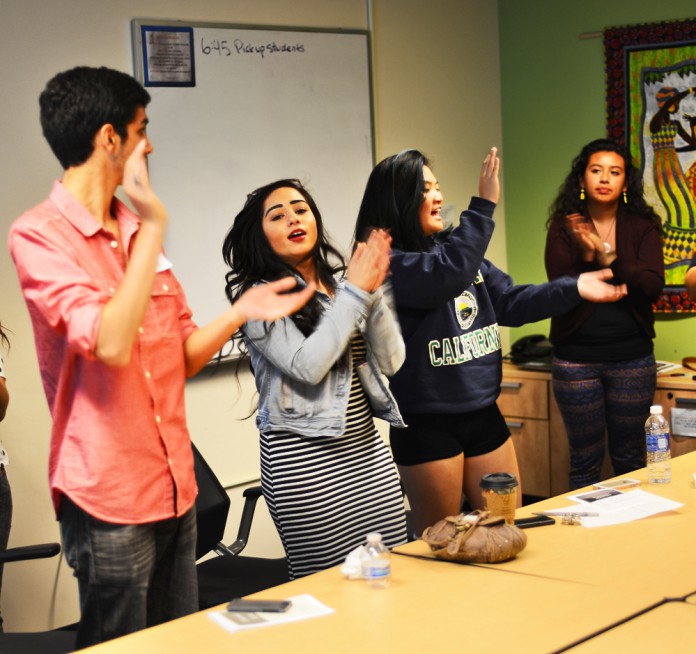 “Educate, be excited about it, and organize,” said Osuna, a UCSB Ph.D candidate in sociology, drawing from Italian socialist thinker Antonio Gramsci. “Those are three things that are very important for us to think about when we think about internalized racism.”

After the keynote speech, SCORE initiated the first workshop session and reminded students of various community agreements such as the “Use of inclusive language” and “Challenge the idea, not the person.”

“[Like a potato,] brown is the outside but it has a lot of internalized whiteness,” said Kota as she explained the title of the workshop.

Throughout this session, students shared personal anecdotes and ideas about the stigmatization of darkness, specifically in South Asian cultures.

“Historically, women who had pale skin were in a very high class,” said third-year communication major Chris Nguyen. “They didn’t have to work. They would stay indoors all the time, and then that’s how the image of a darker person is viewed as lesser, because darker people are working class.”

Bettencourt said that in the case of the Israeli occupation of Palestine, some UCSB students were critical of where their tuition money was going, so they brought forth “A Resolution to Divest from Companies that Profit from Apartheid” to AS Senate in Spring 2013.

As a comparison, Kaur used the successful UC divestment from apartheid-era South Africa.

“We as students do have so much power,” she said.

In the last session, one workshop presented by AS Student Initiated Recruitment and Retention Committee (SIRRC) addressed microaggressions, primarily as they occur in the educational setting.

“[Microaggressions are] comments or jokes or just anything said about a certain group that is either intentional or unintentionally derogatory or offensive towards them,” said fourth-year undergraduate Iris Yang, retention co-chair for SIRRC.

Sometimes these microaggressions may detract students from desired career paths.

“For a while I felt so not confident about my major,” SIRRC co-chair and AS Sen. Belen Verdugo said. “But then I just really learned to love my major.”

The presenters briefly discussed the possibility of the Gaucho mascot being a racist icon, an idea previously announced by AS Living History Adviser Mahader Tesfai on his Facebook wall. Reception of this topic was neutral.

Afterwards, caucus spaces were made available for people who identified as part of a particular group. The groups included South Asian, Queer People of Color, and Pacific Islander, among others.

“I haven’t really been in a time where I’ve been in a room with people that are all of mixed race,” said second-year EEMB major Kai Wilmsen after attending the Mixed Heritage caucus, “so I thought that was really cool and a very refreshing experience to be able to talk about the things that we face as mixed race students.”

Finally, guest speaker Kashira Ayers, third-year communication and feminist studies double major, gave the closing statement. Ayers’ speech concluded with these words: “In solidarity and in struggle, we will rise.”