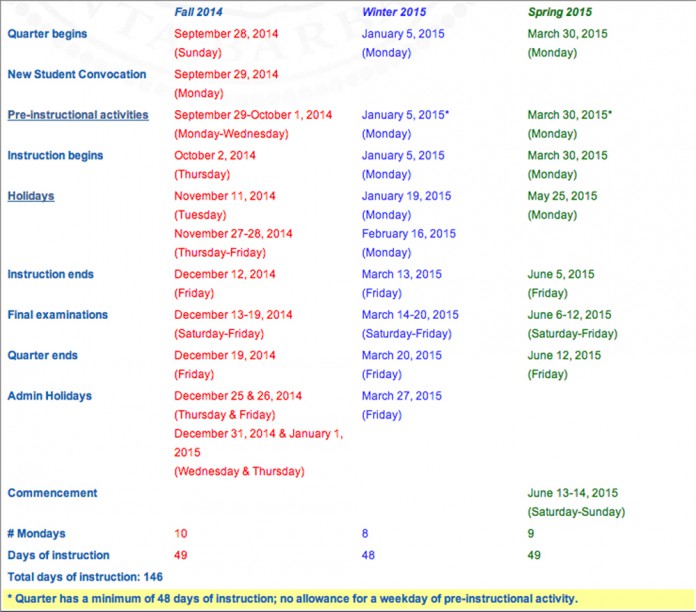 According to the 2014-2015 Academic Calendar released by the Office of the Registrar, fall quarter begins next year on Sunday, Sept. 28, with pre-instructional activities occurring until Wednesday, Oct. 1. Classes will begin on Thursday, Oct. 2.

Because the quarter will commence approximately a week later than usual, officials have decided to shorten winter break from three weeks to two weeks to avoid further changes in the winter and spring quarters.

The Sacramento Bee reports that the policy was issued in June 2007 after members of the Jewish community complained about move-in days conflicting with Jewish High Holy Days during the week between the start of Rosh Hashanah and Yom Kippur.

All of the University of California campuses on the quarter system will be affected by this change. However, UC Merced and UC Berkeley are on the semester calendar and will not be affected by the shift.

According to Hillel’s online college guide, 2,750 of 20,000 undergraduates (13.8 percent) enrolled at UC Santa Barbara are Jewish. This statistic places UCSB in one of the top 60 universities by Jewish population. Other UCs, such as UC Santa Cruz (17.5%), also have high populations of Jewish students.

“As a student at UCSB, I have missed Hanukkah and Passover due to class schedules,” said Fliegel. “Why are administrators accommodating Jewish students in this situation and not in others?”

Fliegel acknowledged that there would always be troublesome scheduling overlaps because the Jewish calendar is on the lunar cycle, whereas classes are scheduled on the Gregorian calendar.

“It is just not practical to shorten break,” said Fliegel.

Still other students have expressed anger about the shortened break. In a public post on Facebook on Thursday, Jan. 23, Associated Students President Jonathan Abboud responded to these concerns. Abboud addressed the negative responses of students and the decision-making process of administrators.

“It was a poor decision by administration to just lob off a week of winter break instead of coming up with a creative solution,” said Abboud.

A recent editorial from UCLA’s Jewish Newsmagazine Ha’Am reported on the schedule change, stressing that the schedule change was certainly not a result of any efforts of Jewish students, as some of the opponents of the change speculated. Instead, it is a direct effect of the University of California’s policy.

According to Ha’Am, the decision is not without precedent.

“In 2009, UC Berkeley and UC Merced both reorganized their calendars in August to accommodate students observing the Muslim holiday of Ramadan,” the editorial said.

Abboud also stressed that students should work together toward a solution rather than directing their enmity at the Jewish community.

“This is the result of policy drafted long ago and the academic calendar is set a couple years in advance—this tells us we must be more vigilant with new policies and being present at campus administrative committee meetings,” he said. “I am positive we can work towards a solution for 2014-2015 AND towards a solution for students from other cultures and religions that need the same level of institutional support.”

Some UC students seeking a solution have created a petition on change.org to maintain the 3-week winter break. Addressed to Janet Napolitano, the petition advocated further scheduling changes to accommodate both Jewish students and a 3-week break. The goal of the petition is to reach 50,000 signatures before sending the letter to Napolitano and the UC Regents.

Photo Courtesy of UCSB’s Office of the Registrar