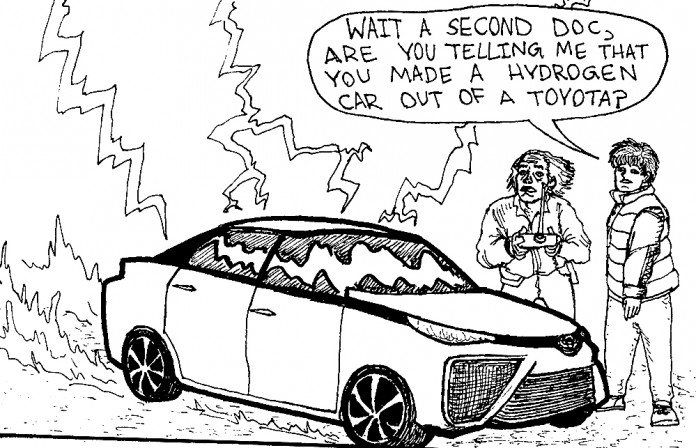 “We didn’t reinvent the wheel; we just reinvented everything that turns it,” says Robert Carter, senior vice president of automotive operations for Toyota.

The 2014 Consumer Electronics Show in Las Vegas served as a platform for the introduction of the upcoming hydrogen fuel cell-powered Toyota FCV in United States. While the car made its debut at the Tokyo Motor Show in November, last Monday was the first time it was formally announced to the American public.

As other car manufacturers continue to pursue all-electric cars, Toyota instead pushes toward fuel-cell vehicle (FCV) technology that has been in development since 1996, when it developed the FCEV, or the fuel-cell electric vehicle. According to the company’s website, the FCEV is “equipped with a proprietary fuel cell stack and a hydrogen-absorbing alloy tank.”

Almost two decades later, Toyota claims that the hydrogen fuel-cell car will finally be made available to the public. The company advertises that the car employs the “same hybrid technology at the heart of a Prius but with hydrogen and fuel-cell stack” and would provide a “driving experience that’s on par with a gasoline engine,” but without any carbon emissions.

The fuel-cell technology will combine oxygen and hydrogen to create water and electricity, emitting only water vapor. The car would run on the produced electricity that will be channeled to a drive motor by fuel-cell channels. It will also be able to store about 100 kilowatts of power with zero emissions. According to CNET, “The FCV’s propulsion system is small enough to fit beneath the seats, and two high-pressure hydrogen tanks save space and lower costs.”

Carter announced that the vehicle can run for about 310 miles on one fill-up, which would take less than five minutes. It can also go up to 100 miles per hour, and accelerate from 0 to 60 mph in 10 seconds. What more could a car provide?

Well, this one might be able to power your house for up to a week. According to Taylor Soper of GeekWire, “Toyota’s engineers are developing an adapter that will connect its fuel-cell car into the electrical grid of a home which can provide enough power for one whole week in emergency situations.”

There are still a few complications before FCV can be offered to the general public, however. The primary two include the cost of the vehicle and the need to construct hydrogen-refueling stations. To tackle these obstacles, Toyota is working on improving the technology and its production efficiency. While the price has not been announced yet, it is estimated around $50,000, although the company claims that it is striving for lower prices.

Furthermore, according to Richard Nieva of CNET, the California government has already approved “$200 million in funding to build about 20 stations by 2015, and a total of 40 by the year after that.” Toyota is also working with UC Irvine to determine the best-suited locations for these hydrogen refueling stations.

The car is set to be introduced in Southern California by 2015. The company has already conducted multiple safety tests on a test vehicle and has driven a camouflaged FCV around North America for thousands of miles.

Toyota’s FCV looks to be an innovative step toward the preservation of our natural resources and reduction of carbon emissions.