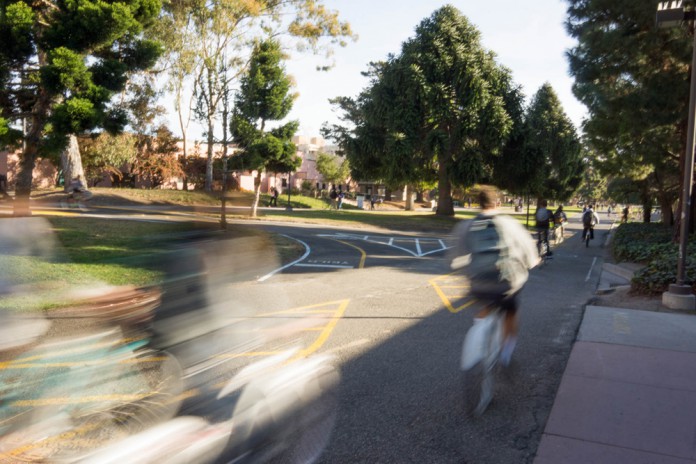 A new Y-intersection has been added to the system of bike paths because of an effort by the Associated Students Bike Committee to bring all of campus within easier reach of bicycling Gauchos.

The new intersection linking the primary bike path (between Pardall Tunnel and Davidson Library) to the road adjacent to parking lot 29 and the AS Bike Shop can be found between the HSSB and Counseling and Career Services.

Vice Chair of the Bike Committee Mac Kennedy was enthusiastic about the process that led to the intersection becoming a reality.

“The funny thing about this project is how quickly it actually got done,” Kennedy said. “Me and our Bike Committee Program Coordinator Zac Armour decided to organize a bike-around-meeting with Marc Fisher, the Senior Associated Vice Chancellor. We charted out our proposed improvements for the year and tried to identify more problems with the campus biking experience.”

The HSSB location was decided based on the difficulty of getting to and from the building to the bike path, and because of the ease of fixing that problem.

“When we reached HSSB [we] stood looking at the spot where the intersection is now and we all just realized how simple and inexpensive it would be to connect the path to the service road,” Kennedy said. “Previous discussions within our committee had halted at proposing a roundabout and having to go through the challenges of that; this was much more simple. A roundabout would have cost a few million dollars. This cost a few thousand.”

Previously, merging onto the main bike path coming from the HSSB required balance, a cool head, and a trusty bike, as the often-slippery grassy knoll put many Gauchos’ biking skills to the test. Now the thrills of extreme sport amid chaotic traffic have been tamed, replaced instead by the steady beat of sensibly controlled traffic.

That is not to say that merging into and out of the main bike path won’t demand full attention. The flow of traffic at the intersection is controlled by four yield signs, meaning the biker is responsible for other fellow bikers reaching their destinations in time, and in one piece. Kennedy is optimistic about the success this intersection will have in the hands of Gauchos.

“The intersection will hopefully stop accidents and smoothen the flow of traffic,” Kennedy said. “Bikers should always yield to oncoming traffic in this instance. We have the yield signage on the pavement there, so hopefully people learn quickly, which we think they will.”

And, according to Kennedy, they have plenty to look forward to in the coming months.

“We currently have about 16 projects in the pipeline,” Kennedy said. “We’re very excited about the rest of this academic year, it’s now just a matter of executing these projects; this will require further negotiation with administration and using our funds as effectively as possible.”