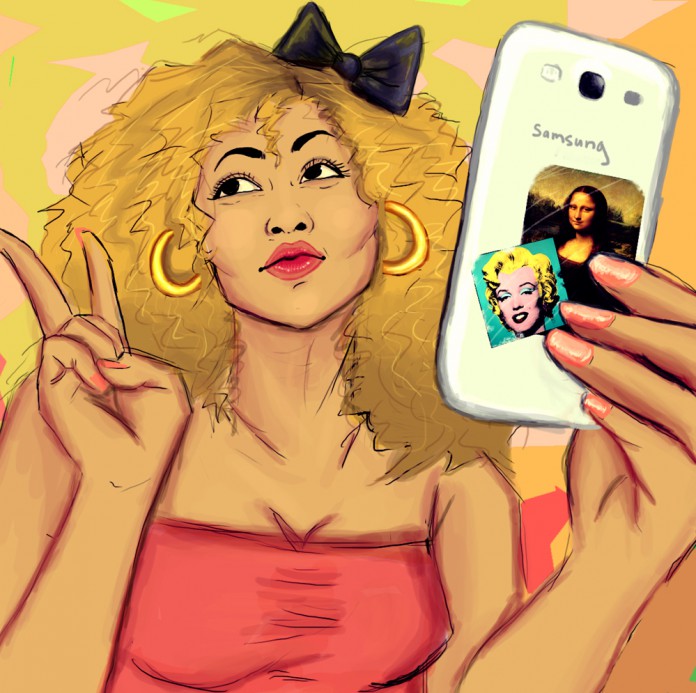 Last November, the Oxford English Dictionary named “selfie” the word the year. For anyone living under a rock, the OED defines “selfie” as “a photograph that one has taken of oneself, typically one taken with a smartphone or webcam and uploaded to a social media website.”

Many news sources like CNN and USA Today among others, have also named 2013 the year of the selfie because of the surge in popularity of the word, as well as the phenomenon of people all over the world taking massive amounts of pictures of themselves daily. With a spike in the popularity of social media apps that thrive on shamelessness and narcissism like Snapchat and Instagram, 2013 brought a widespread indulgence in self-absorption. At the height of this narcissism is the Selfie Olympics: a trend in which people go to drastic lengths to take mirror selfies in ridiculous, physically challenging positions. My personal favorite in the Selfie Olympics is a girl doing the splits with one leg vertically against the bathroom door and the other leg standing straight, holding her phone by her lifted foot to take the picture. Totally casual.

What makes this phenomenon even more interesting is that anyone can do it–and everyone does. From celebrities like Kim Kardashian (notoriously the world’s selfie queen), to President Barack Obama, to the average teen, everyone takes selfies. Many smartphones now come with front-facing cameras that make it easier for everyone to take these self-portraits.

CNN sums up the irony of having “selfie” as the word of the year: “the most esteemed guardian of the English language has bestowed a prestigious honor upon debatably the most embarrassing phenomenon of the digital age: the selfie.” This trend is undoubtedly embarrassing for our generation. What will future generations think about our current obsession with taking pictures of ourselves constantly? Although I love taking selfies as much as any other millennial, I’m not sure I’d want my future grandchildren to find my incredibly awkward selfies or flattering cleavage selfies, any more than I’d want to see the same type of pictures of my own grandparents.

But who knows? Maybe the selfie trend will continue and become the societal norm for photography. Companies are constantly improving the quality of smartphone cameras so it makes instant photography more accessible to anyone. We now have the technology to take photos of beautiful landscapes or monuments, but it’s always more fun to throw your own face in there–I have a few selfies with the Statue of Liberty over my shoulder and dozens with the Golden Gate Bridge in the background. Portrait styles have evolved from cave drawings to oil paintings–even Van Gogh did selfies!–to studio portraits to selfies. Maybe this photography style will stick around and teens in the year 2046 or 3005 will take their own version of selfies.

I’d like to think that I’m pro-selfie. I use Snapchat, Facebook, and Instagram daily, as do a majority of my friends. Vampire Weekend frontman Ezra Koenig, also a self-proclaimed selfie fan, makes a strong defense of the selfie: how it promotes good self-esteem levels and how it keeps us connected. In a Rolling Stones article, he says, “I could Google image search ‘the sky’ and I would probably see beautiful images to knock my socks off. But I can’t Google, […] ‘What does my friend look like today?’ For you to be able to take a picture of yourself that you feel good enough about to share with the world – I think that’s a great thing.”

I don’t see any of my friends from my hometown while I’m at school every day–I don’t even see all of my University of California, Santa Barbara friends daily. Using social media platforms to look at my friends’ selfies sometimes makes me feel closer to home, just being able to see my friends’ faces–just as long as they don’t get too vain and post multiple selfies a day. At a time when the norm of social interaction is becoming increasingly less personal, with texts replacing phone calls, it makes me happy to see my friend’s faces more often through selfies. The effect of a comically hideous GPOY (gratuitous picture of yourself) sent from your best friend is exponentially more entertaining and gratifying than that of an unemotional text.

There will likely be some future negative repercussions for this trend, but as a person in her 20s who tries to maintain a YOLO lifestyle, I’ll throw caution to the wind and continue to take my #shamelessselfies and share them with the world.