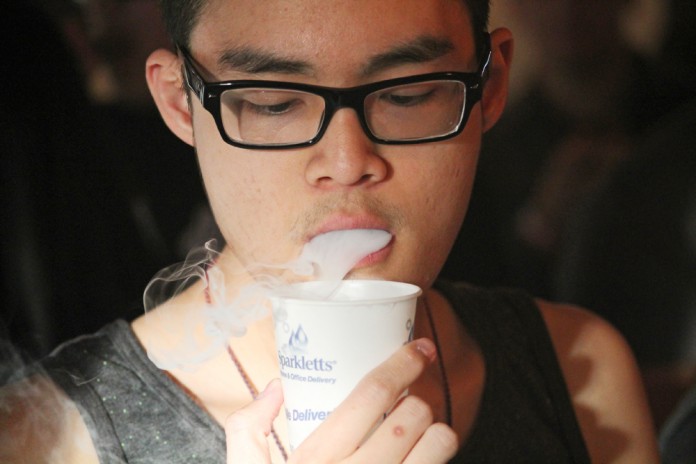 The e-cigarette craze is sweeping the nation, and adults and college students alike are succumbing to what may be called a revolution.

According to the FDA, e-cigarettes are “battery-operated devices designed to look like and to be used in the same manner as conventional cigarettes. Sold online and in many shopping malls, the devices generally contain cartridges filled with nicotine, flavor, and other chemicals. They turn nicotine, which is highly addictive, and other chemicals into a vapor that is inhaled by the user.”

Essentially, e-cigarette use–commonly dubbed “vaping”–is meant to help people stop smoking cigarettes; the juice used in electronic cigarettes contains the addictive substance nicotine in addition to artificial flavors in order to provide users with a similar sensory experience to smoking a cigarette without the harmful carcinogens.

Though the e-cigarette is considered a tobacco-free product, it is still banned on the University of California, Santa Barbara campus, according to the UC Smoke and Tobacco Free Policy. So, contrary to popular belief, students will still have to leave campus to use their e-cigarettes, even though the mechanisms emit water vapor instead of smoke.

In light of UCSB’s ban on smoking, students have flocked to Isla Vista in order to feed their cigarette addictions, or rather to kick them by using e-cigarettes. Within a week of our return to campus for winter quarter, Vapor Connection opened, providing UCSB and Santa Barbara City College students as well as other Isla Vista locals with an insight into the world of vaping.

Located at 900 Embarcadero Del Mar in Isla Vista, Vapor Connection is situated above Silvergreens. The e-cigarette lounge is rather small–just one room with approximately 10 stools alongside a chrome-colored bar. Behind the bar the juices rest side by side on numerous black shelves, and across the room is a glass display case containing a multitude of e-cigarettes, vaporizers, and accessories available to be purchased.

“We thought it would be a good addition to Santa Barbara,” said owner and district manager Jesse Ziegler.

Ziegler, who used to smoke cigarettes, has been “vaping” for over a year now. He attributes his quitting to his use of e-cigarettes.

“People enjoy smoking cigarettes, but [dislike] the impact they have on their health. This is a healthier alternative to smoking,” said Ziegler.

The vaping process is rather interactive, according to JP Reyes, a freshman at SBCC. Reyes, a former user of hookah and chewing tobacco, has been using e-cigarettes for the past year.

“Ever since I started vaping, I’ve kicked the habit from anything else,” said Reyes.

Recently, however, he has been customizing his own vaporizers, a process which many people consider a pastime. This includes buying “juices” in flavors ranging from the common menthol and watermelon to unique varieties, such as Pink Starburst and Unicorn Blood.

“It’s a really nice hobby, and customizing my own vapes is a really fun and cool experience,” said Reyes.

While Vapor Connection provides the patrons of IV with a healthier alternative to cigarette use, that doesn’t mean that vaping is a healthy activity. E-cigarettes contain nicotine, making them helpful to those who are addicted to cigarettes because they allow the users to wean off of them. However, vaping is not healthy for those who are not addicted to cigarettes at all. Essentially, teenagers who have never smoked cigarettes at all could start vaping for fun, and therefore eventually become addicted to the nicotine. The adverse long-term effects greatly outweigh the initial enjoyment of the product.

According to a study conducted by CNN, many critics of e-cigarettes believe that although the devices are less harmful than cigarettes, they could potentially lead users–particularly young people–to try other products, including actual cigarettes.

Whether they are trying to quit smoking or simply looking for a new hobby, UCSB students continue to use e-cigarettes–and they are definitely having a blast doing it.