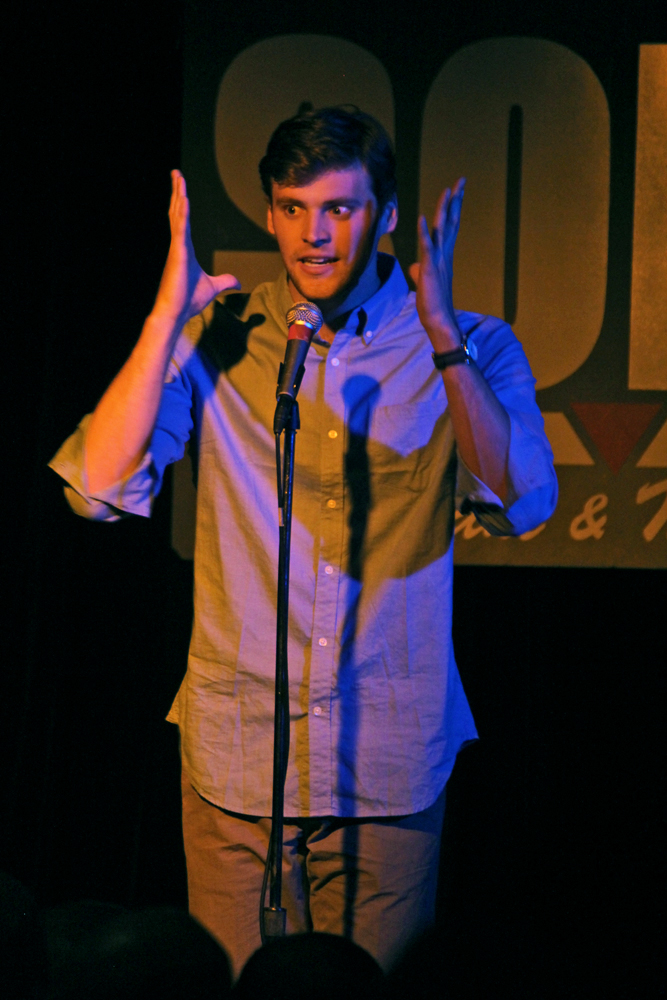 The Right Side Up Poets, a group of University of California, Santa Barbara students who have worked tirelessly to perfect their art of spoken word poetry, performed at SOhO Restaurant and Music Club on Wednesday, Jan. 22.

The performance, entitled “Talking to Strangers,” was the poets’ second annual spoken word show. The group debuted in the Fall of 2012 and got a strong positive reaction, encouraging the students to perform again.

The students are a part of UCSB’s Art 137: Spoken Word class, taught by Professor Kip Fulbeck. This course is the first of its kind to be offered on a university campus, and it helps students to push their boundaries of comfort and self-discovery through poetry.

“It’s super cathartic,” said Chanel Miller, a fourth-year College of Creative Studies literature major. “You get to be whoever you want. I’m super shy normally, but here I’m able to get over that. It’s a justified form of crazy.” Miller performed two pieces, both of which left the audience in awe of her talent.

Between poems, Fulbeck mentioned the vulnerability the performers experience when going up on stage, for they have to be completely honest with themselves and the people in the crowd. This sentiment was proven to be true.

From UCSB alumni Kevin Ferguson’s performance about the things he fears to the poem Mel Rosenberg, a fourth-year CSS literature major with a minor in professional editing, presented on the uncertainty of intimacy, there was no denying the effect the Right Side Up poets had on the audience.

These presentations do not come easy, however. They require a lot of hard work from the professor and the students in order to fully develop each poem and get the students up to their full speaking potential. Some students have an edge on performing over others, but they are not exempt from the practice required to put on a good show.

“It’s just part of my day-to-day performance,” said Oree Holban, a graduate student studying fine arts. “So, it’s not too much effort, but of course I have to work. You have to work if you want to be good at anything.” He gave a mind-blowing performance on the extreme difficulty people have with being accepted once labeled “different.”

Spoken word is a form of poetry that focuses on words and inflection, making the poet both the performance and the performer. As a result, it is often raw and uncensored, leaving the listeners speechless at the amount of honesty and bravery that is shared with them.

“Talking to Strangers” certainly exemplified the sentiment of being emotionally open. The audience was clearly appreciative of learning, through the poetry, that they are not alone in what they go through.

The group gives students and show-goers alike the chance to see that they do not have to conform to a certain standard of what is acceptable. Instead, they get to understand that they are acceptable exactly as they are and then take the further step of sharing who they are with the audience.

“What struck me the most was the confidence each artist had. They owned their performances, allowing us to enter into their mind space,” said Natalie O’Brien, a third-year English major and show attendee. “The support and enthusiasm from the audience elevated the energy level in the room, and the performances thrived when the artist and audience fed off of that energy.”

The experience was transformative to those in attendance. It was impossible to walk away without a newfound thirst to understand oneself. In fact, a show last year is what inspired current Right Side Up poet Katie Edwards to join the group. A fourth-year art major, Edwards gave a heartbreakingly honest performance about her relationship with her mother and presented another piece on attraction.

“I saw the show last Spring and I just knew it was something I had to do,” said Edwards. “I was terrified but I knew I had to do it. I wanted to be like the people on stage.”