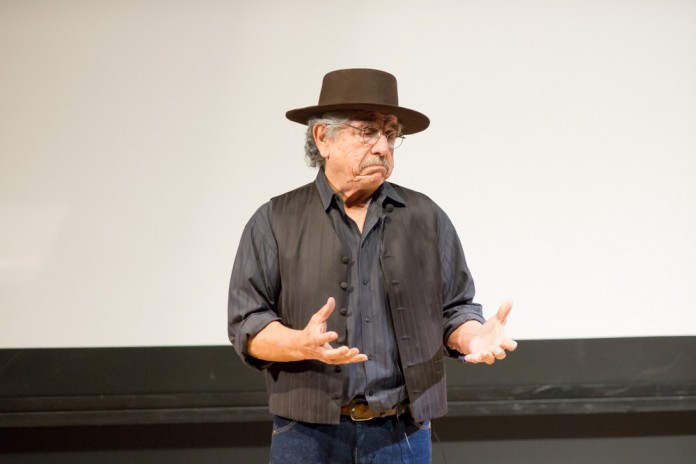 Legendary Chicano poster artist Malaquias Montoya shared his politically-driven artwork at the Multicultural Center of University of California, Santa Barbara on Jan. 21. He divulged personal anecdotes about his cultural upbringing as explanations for the political messages in his posters.

Montoya started off his presentation by describing his difficult childhood as the son of migrant Mexican farm workers in America. Because of his family’s lifestyle, he was always on the move, resulting in a constantly changing environment. Growing up in an immigrant family brought upon inflictions of social injustice. However, it was these hardships that eventually shaped his artwork.

“All art speaks on someone’s behalf, and because I was raised in a family of poor farm workers, I witnessed a lot of injustice of people that did not have a voice,” said Montoya.

It was through his drawings, paintings, murals, and silkscreens that Montoya learned to convey his message of resistance to disenfranchised groups: namely, the Chicano, Mexican, and Central American working place. Because they incorporate social justice themes, such as immigration, Palestine, war, and the death penalty, his work provides a source of strength to those who must tolerate injustice on a daily basis.

“I am much more articulate and able to express myself more eloquently through my art,” Montoya wrote on his website. “It is with this voice that I attempt to communicate, reach out and touch others.”

Notably, one of his first pieces of artwork, Support the Farmworkers (1968), requested food and clothing donations for the “Farmworkers War.” Through the poster’s bold lettering, contrasting colors, and symbolic image of a bird, it’s clear that Montoya is demanding attention from viewers. His art isn’t just a form of creative self-expression, but a social tool Montoya skillfully wields in order to influence others’ perspectives, and, hopefully, to improve the lives of those often silent and ignored.

“What better function for art at this time?” Montoya wrote on his website. “A voice for the voiceless.”

Montoya is a prominent figure of the Chicano Art Movement of the 1960s and ’70s, and remains a renowned artist today. As a co-founder of the Mexican-American Liberation Art Front and a UC Davis professor, there is no doubt that Montoya has greatly influenced not only the artistic community but also the social and political life beyond it.

“As a Chicano artist, I feel a responsibility that all of my art should be a reflection of my political beliefs, an art of protest,” Montoya wrote on his website. “The struggle of all people cannot be merely intellectually accepted. It must become part of our very being as artists; otherwise, we cannot give expression to it in our work.”

During his presentation, Montoya explained the origins of his artistic interest. From a young age, Montoya was immersed in the world of art and beauty. He credits his mother as the biggest inspiration for his artwork, for it was her who introduced him to a world of creativity. He recollected of how his mother would decorate the interior of their migrant tents with cardboard boxes and homemade paint, until the walls were hued with vibrant colors and covered with decorations, making their temporary settlement seem more like a home.

“We all want beauty around us,” said Montoya, quoting his mother’s words.

Because of the Montoyas’ migrant lifestyle, it wasn’t until the fourth grade that Montoya managed to get a stable education. Because of his inability to fully grasp the English language, he was placed into a special needs class, where students spent hours a day drawing and painting. It was in that classroom that Montoya truly explored his artistic side for the first time.

“Learning to draw was like another language,” said Montoya. “I allowed it to speak for me.”

Montoya is not only a silkscreen artist, but he is an educator of our political times, a social activist, and a world citizen who seeks to constantly give back to his community.

“We [artists] are the creators of culture, and it is our responsibility that our images are of our times – and that they be depicted honestly and promote an attitude towards existing reality; a confrontational attitude, one of change rather than adaptability – images of our time and for our contemporaries,” Montoya wrote on his website.

By sharing his artwork with the UCSB student body, Montoya hopes to convey his message of remaining strong and resistant against a sea of injustice.

“I want to give them a voice and empower them,” said Montoya. “Even students oftentimes feel powerless.”