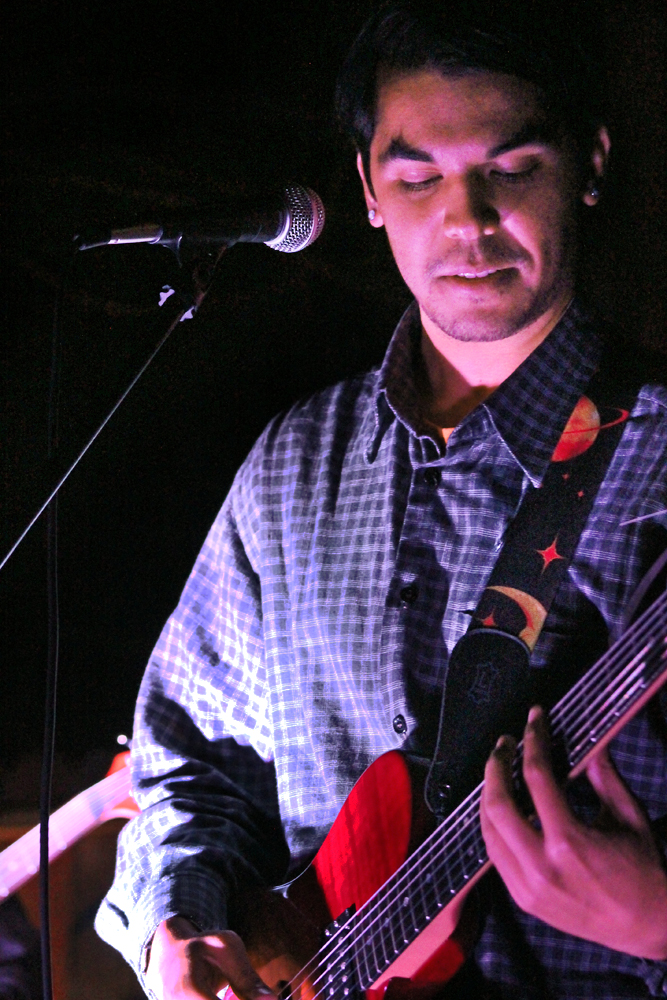 In celebration of rounding their 300th member, the University of California, Santa Barbara’s Music Production Club put on a concert in the theme of the “300” film on Saturday, Jan. 25, at 6721 Pasado. Starring five live bands and two DJs, the event showcased local artists That’s What She Said, Shadowbox, Eastern Bakery, The Jay Walkers, Slouch, Underbelly, and Convex.

An open community for jamming, writing, and sharing music, MPC has 376 members on Facebook as of press time. The club also puts on open mic nights at the Coffee Collaborative on Pardall every Tuesday.

The distinct sound of live music filled the 6700 block of Pasado, starting from the ambitiously early hour of 7 p.m. That taken into consideration, the turnout for the first band, That’s What She Said, was pretty good. Playing pop rock since they formed in the fall quarter of 2013, the all-girl band played two original songs and a number of covers, including Paramore’s “Crush.”

Commenting on their sound, guitarist and lead singer Marie Sassinopoulos said they secretly wanted to be punk. They were my personal favorite band of the night, and came across as very well integrated although this was only their second concert.

The second band, Shadowbox, got the growing crowd going with an energetic serving of semi-heavy punk rock. Compared to That’s What She Said, their sound was looser and more raw.

Talking to their singer, Kevin Vicencio, I learned that he had joined the band only two days before the concert after seeing a post on the MPC’s Facebook page saying that the band needed a singer. Despite his short time as a band member, Vicencio gave it his all and at one point did what I want to call a “crowd run,” which I’m sure would have been a crowd surf had there been enough people and a stage to dive off of.

Eastern Bakery, a three-man band, took it from there with more punk and a set of original numbers, mixing high-pitched vocals with raw instrumental sound. During their performance, the guys from Shadowbox even started a mosh pit, which lacked people but definitely not enthusiasm.

Eastern Bakery sounds like a band of more than three, and when I mentioned this to them after their performance, they agreed and said, “Yeah, we just play louder.”

At this point I was interested in why punk is such a popular genre for Isla Vista bands, and Eastern Bakery members Brandon Downun (guitar and vocals) and Dominick Burnham (bass) explained that punk is non-exclusive, do-it-yourself, and easy to get down to.

Inspired by artists such as Dido, Blink 182, and Nirvana, Eastern Bakery also describes their own genre as “Isla Vista oohz-ore.” They even did a punk cover of Dido’s song “Thank You.” Anyone interested can hear them play again on the evening of Wednesday, Jan. 29, at the end of Sueno Road (follow the sound, they say).

The fourth band, The Jay Walkers, tuned in with a full bodied, rough edged set of rock and, to no-one’s surprise, punk. They were followed by the fifth band of the night, Slouch, who got people dancing again with their cover of The Beatles’ “Twist and Shout.”

Whether people had gone to the concert primarily for the live bands or because party hopping is prime around 10 p.m., by the time the DJs started setting up, the crowd decreased by at least two-thirds. A drunk guy came up to me and explained that everybody was leaving because they were already too drunk to stay, which I thought was pretty good reasoning on his part. It was a shame the crowd dwindled, because DJ Underbelly and DJ Convex had some decent beats and transitions going on.

MPC’s “300” concert was a great event; the atmosphere was good, the band transitions fast, and the evening very well planned. The outdoor lighting gave the scene and the musicians an extra touch of professionalism as well. Watch out, IV: punk is not dead.