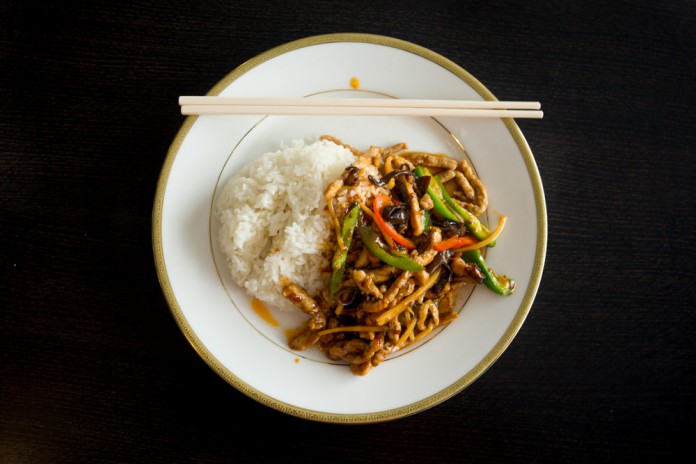 Identifiable only by a string of Chinese red paper lanterns hung above the building’s awning is Isla Vista’s newest restaurant–Wok on the Wild Side. Although the restaurant needs to make some improvements, it stands as a firm addition to the food community in its debut.

As I entered the cold aluminum battlefield of nonexistent décor, the oh-so familiar smell of home-style, authentic, oily Chinese food filled my nostrils, instantly comforting me. But then I was immediately smacked in the face with a frenzied sense of disorder.

The noise level was heavy. The newly constructed, echo-prone space was filled with the chit-chat of many Mandarin-speaking students enjoying the passably authentic Chinese cuisine. In the elongated line of around 15 snaking through the already-crowded tables, it seemed that every perplexed customer could only get information about the food from the people already consuming their orders. On the tables of other patrons, there were mostly rice dishes piled alongside meat, noodles swimming in bowls of soup, with the occasional boba milk tea on the side.

This may just be because of the recent opening, but the process of actually ordering at the restaurant was completely disorganized and overall very confusing. It took around 20 minutes to actually just place an order. A couple customers gave up on the process, and some people who had just stepped in looked at the line and turned right back around.

It also seemed there were only two people working the tables, cash register, and serving food. But on the plus side, they were very accommodating people. The man who tended to my request for takeout was very polite and appreciative, and the woman running around serving food was extremely attentive and friendly.

The dishes play around with different types of Chinese food, not really geared toward a specific region or specialty. The dishes are primarily soups; meat, vegetarian, and seafood main dishes; noodles; and various slushes and boba drinks. The cuisine is a mashing of every type of Chinese taste you can imagine–the menu leaps from descriptions of sweet and sour, Mandarin, Szechuan, Honey Walnut, Kung Pao, Ma Puo, and more.

The Rice with Szechuan Pork was $8.99 and decently portioned. Served with a large dome of white rice stained with the notorious orange oil of the stir fry, the plate wasn’t bad looking. The strips of pork were mixed in with slivers of bamboo shoots, tiny pieces of wood ear mushrooms, and peppers. The spice wasn’t comparable to the peppercorn numbness you’d get from an authentic Szechuan restaurant, but the it grew mildly and tamely.

The Rice with Orange Peel Chicken was $7.99 and practically emulated the Orange Chicken from Panda Express, except without the deep fried exterior and with a bit more ingredient quality and care. The dish was lacking in actual chicken, however, and in the presence of mostly vegetables, it made me question if I actually ordered a dish called “chunks of green bell peppers with even more chunks of white onion.”

The portion size and price are pretty agreeable for student wallets, and the quality of the food isn’t half-bad. For the area and cost, the food isn’t stellar, but it is decently tasty. When you’re looking for something other than the usual sandwich, burrito, and pizza, this place is definitely worth a couple more steps down Pardall to satisfy your craving for a savory meal.