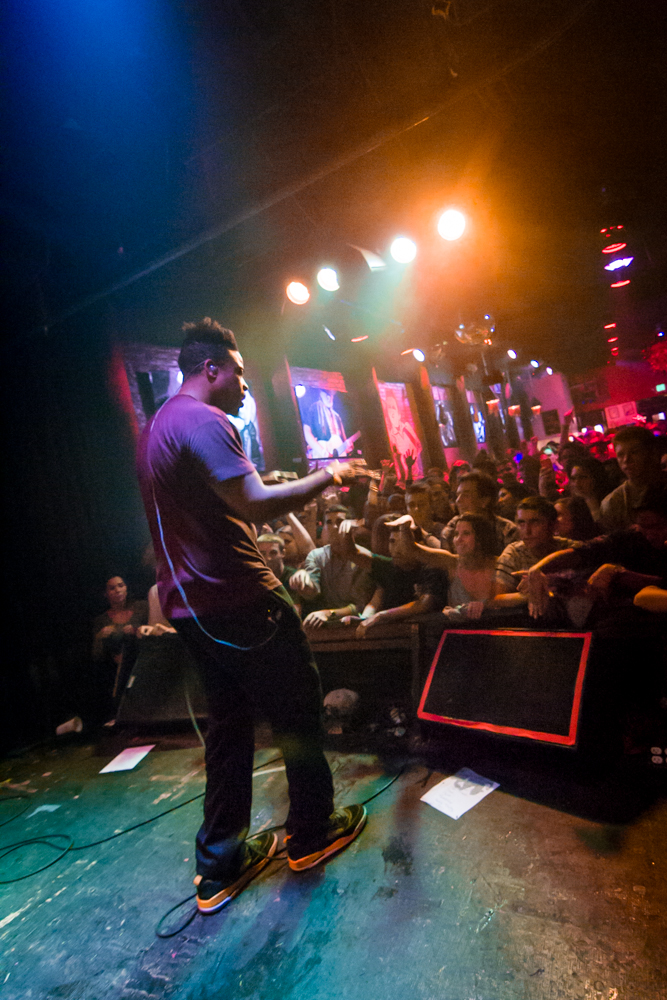 Zion I’s “The Masters of Ceremony” tour made its third stop at Velvet Jones on Saturday, Jan. 25. Touring with Zion I were Sol, MKSMTH, and Aileron–and they assured the crowd that this was their best stop yet.

Each performer brought his own style to the stage, but there was a common element of high energy and positivity throughout the night. The atmosphere was set by Aileron, followed by DJ MKSMTH.

Surprisingly, MKSMTH mixed a version of Miley Cyrus’ “Wrecking Ball” well enough to get a group of 20-somethings to dance to it. This was no doubt aided by the in-house bar, but it was impressive nonetheless.

Next came Sol, aka Solzilla, an up-and-coming rapper hailing from Seattle. This was his first tour with Zion I, but there were more than a few people there to see him specifically, and he immediately got the crowd jumping.

Within a song and a half he was already executing one of the best stage dives I’ve ever seen. Sol seemed almost as excited as his fans during his performance, taking time in between songs to engage the crowd and have a good time.

His set was mostly composed of his newest EP, “Eyes Open,” which he primarily wrote during a 10-month trip around the world. The EP varies from humorous to bittersweet to optimistically content, and it takes chances with the beats and lyrically.

The main event was, of course, headliner Zion I, performing–as they often do–in a semi smoke filled room.

Consisting of AmpLive and MC Zumbi, Zion I promoted their EP “Masters of Ceremony,” released Jan. 14 of this year. Tickets had sold out on the day of the show, and the Bay Area natives certainly had a packed floor while performing.

As is common with a loyal fan following, the crowd sang and danced along to just about every song, while doing their best to learn the new songs on the fly.

The new songs were well received, but Zion I wasn’t shy about playing some of their old fan favorites, which really got the crowd going. Closing the night out with “Coastin’,” Zion I and the packed house floated away–coastin’ on a dream.

To read an exclusive interview with Sol, check out the Arts & Entertainment section of the TBL website. Find out who influences Sol, what his favorite part of making music is, what he thinks is the biggest barrier for up-and-coming artists, and more.