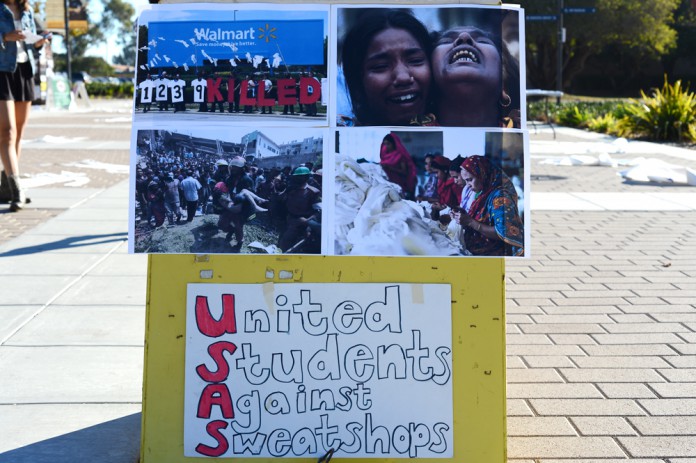 United Students Against Sweatshops (USAS) held an action in front of the library on Thursday, Nov. 14, as part of Humyn Rights Week, to commemorate and raise awareness about the collapse of the Rana Plaza apparel factory in Bangladesh that killed 1,129 workers.

“The Rana Plaza factory that collapsed just over six months ago was eight stories tall, roughly same size as our library,” said Chris Wegemer, one of the organizers of the event and a third-year graduate student in global studies.

The pavement in front of the library was completely filled with paper silhouettes representing the 1,129 killed. Each cutout, which represented 10 workers, had either a picture or relevant information to the factory accident.

One cutout had a quote from a mother discussing her daughter who also worked at the factory.

“I fell from the fourth floor. I lost consciousness and woke up four hours later. I have not seen my daughter since,” said Runa Rani.

According to another cutout, “In more than two decades, not a single factory owner in Bangladesh has ever been prosecuted for the deaths of workers.”

The goals of USAS were to raise awareness through a powerful and visual event and to support USAS’s Bangladesh campaign.

“For the first time in history, there’s an agreement between apparel manufacturers and factories to take responsibility for safety,” said Wegemer.

USAS wants to get all of the manufacturers for University of California, Santa Barbara to sign the agreement.

He thought it was important to grab the attention of students travelling across campus.

“Taking those pathways and putting messages in there is a really good way to reach out,” said Perez-Foust.

According to Wegemer, USAS is the largest worker rights coalition in the United States. Organizations on university campuses have become the forefront of global worker’s rights because of the immense value of the collegiate apparel market, worth approximately between $3 and 4 billion a year. Additionally, because universities are not profit maximizing organizations like a big-box store, the possibility for moral considerations becomes more feasible.

Members of USAS passed out close to 2,000 flyers and tabled all day to get people thinking about sweatshops, effectively reaching many students.

“All too often, we forget that there are people making our clothes,” said Wegemer. “And this is a real issue for people all around the world.”