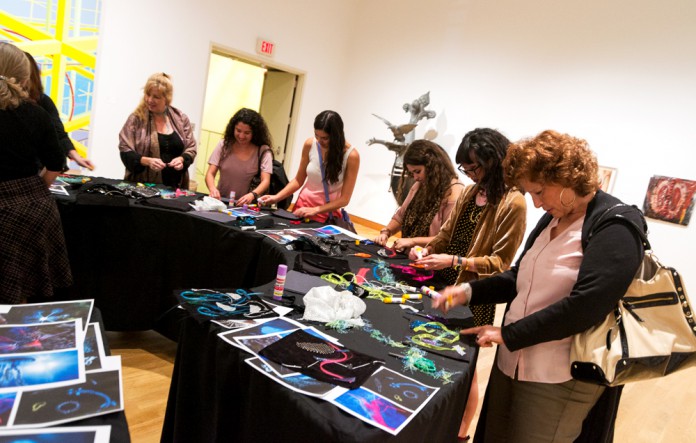 “Atelier” is a French term meaning “workshop,” which was the key idea behind Friday night’s Atelier event at the Santa Barbara Museum of Art. Put on by the museum biannually in the spring and the fall, Atelier is an intimate evening of interactions with art in the museum’s galleries.

At Atelier, guests are invited to explore and learn about current art exhibitions through the use of immersive and interactive workshops, games, and food inspired by the art itself. Aside from the event’s efforts to display and enhance the guest’s artistic experience, Atelier helps local businesses and organizations by giving them a place to promote themselves while interacting with the exhibits.

Friday night’s Atelier was entitled “The Earth is The Bottom of the Sky,” a title almost as intriguing and thought-provoking as the art itself. The event featured two of the museum’s current exhibitions, “John Divola: As Far As I Could Get” and “Totally 80s: Gifts to the Permanent Collection,” which also served as the inspirations for the event’s overall 80s theme.

John Divola’s diverse set of photographs, featuring photos dating from 1975 to 2012, was one of Atelier’s main attractions. Divola has spent his entire 40-year career in Southern California, growing up in the San Fernando Valley and working as a visual artist and art professor throughout much of the region. This current exhibit, “As Far As I Could Get,” is a collaborative exhibition that runs simultaneously in three different Southern California art museums, the other two being the Los Angeles County Museum of Art and the Pomona College Museum of Art. The exhibition explores Divola’s diverse visual artistry and what has been described as a combination of the artificial and the real.

As guests stepped into the Sterling Morton gallery, one of the first things they saw was a long, empty, black sheet of paper on a long table. A puzzling sight at first, the paper was revealed to be the “As Far As You Can Get” Gallery Game, one of many interactive stations throughout the museum’s galleries. The photo series of the same name was created through Divola setting the timer on his camera for 10 seconds and then sprinting off into the distance of his frame. One of these photos featured a wide landscape of trees and the comparatively small Divola, 10 seconds after sprinting away from his own camera lens. In this game, guests were given 10 seconds to make their mark on the black sheet of paper using a white piece of chalk. By the end of the night, what began as a simple sheet of paper became a collaborative work of art by Atelier’s guests.

The other star of the night was the “Totally 80s” exhibit, where guests were invited to enjoy the era that made them who they are through art, drinks, and interactive collage-making. As we entered the exhibit, one of the most prominently intriguing pieces of art was Peter Alexander’s 1981 collage, “Ling.” The piece is simply a series of diverse surfaces painted and pasted onto a velvet backdrop. What seemed like a close-up of one of our grandmother’s ugliest sweaters turned out to be one of the more beautiful works of art at the exhibit, and my personal favorite. Inspired by this abstract piece of 80s artwork, the Velvet Collage workshop station invited guests to create their own collage on pieces of black velvet.

Ian Cutler, a local distiller and University of California, Santa Barbara alum, was stationed at the entrance to the “Totally 80s” exhibit, providing guests with samples of his locally produced whiskeys and craft spirits. Cutler graduated from UCSB with a double major in chemistry and geology. Growing up in the 80s fueled Cutler’s appreciation of art, and he sponsors events like Atelier to promote his own artistic passion for distilling. This is just one of the many ways Atelier helps promote local businesses.

Community outreach also plays a role in Atelier’s mission. One of Divola’s pieces featuring running dogs was used to promote local humane societies and animal shelters. One of these local organizations included the Humane Society of Ventura County, which provided Atelier with literature for its guests to help bolster donations and volunteerism for local animal shelters.

“Atelier is a wonderful opportunity for our community to engage with our current exhibitions,” said Kendall Pata, a local graphic designer and museum teaching artist. “These events make art more accessible by allowing the viewer to create, interact, and explore.”

If the mission of Atelier and SBMA is to engage the local community around art, then mission accomplished.