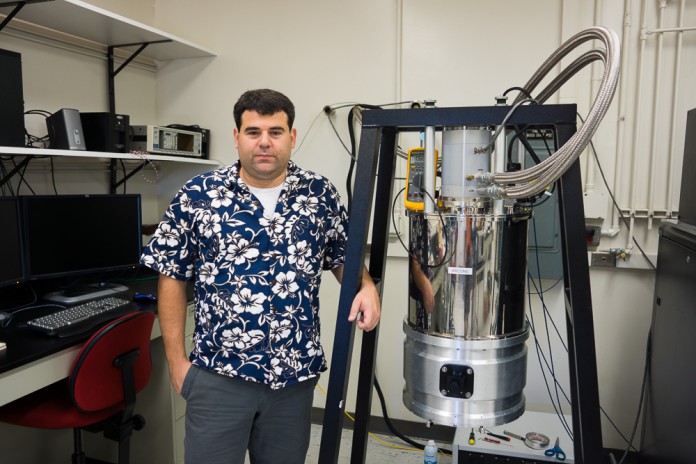 Benjamin Mazin, an assistant professor in the University of California, Santa Barbara physics department, has developed an array of detectors for capturing new frequencies of electromagnetic radiation from space with superconductors.

The detectors, which are an improvement on microwave kinetic inductance detectors, or MKIDs, that first began to be developed around 13 years ago, refine superconductivity’s sensitivity for collecting photons. Super-cooled to temperatures a fraction of a degree above absolute zero, Mazin’s detectors can eliminate much of the thermal background noise that produces a margin of error in the detection of radiation and broadens the range of MKIDs into the more energetic wavelengths that our eyes work at.

Previously, astronomers created images of the universe with charged-coupled device detectors (CCDs) that used semiconductors. Imaging objects in space is not as easy as taking a picture; many cosmic objects do not emit light that can be seen by the naked eye, and so images are built using readings from radiation detectors. In CCDs, an incoming photon knocks an election out of its orbital and the detector measures that particular electron. Detectors utilizing semiconductors can only operate at longer wavelengths; however, Mazin’s MKIDs work in the optical range because of their unprecedented sensitivity.

“In a superconductor, when that photon comes in, it disturbs the equivalent of thousands of these electrons that were originally in Cooper pairs, and then they end up in these free electrons,” Mazin said. “So it makes a lot more excitations that you can measure.”

“It has more to do with the operating temperature and what the thermal noise background is and taking advantage of the lower thermal noise at low temperatures to learn more about every individual photon,” he added, referring to how the vibration of particles above extremely low temperatures can somewhat obscure the incoming radiation’s footprint on the detector.

Though there are different phenomena that these detectors can study depending on technology’s specific application, Mazin is currently using them to observe objects that emit radiation at sub-millimeter wavelengths: object such as white dwarfs, black holes, and neutron stars. One area that Mazin is using the detectors for is the search and study of exoplanets; because the detectors can narrow its focus down to the optical range, it can block out, with the help of an instrument called a coronagraph, the light of exoplanets’ stars and find and focus on the planets themselves. The detector itself, known specifically as the Array Camera for Optical to Near-infrared Spectrophotometry (ARCONS), has a 20-by-20-inch field of view for observations, according to RedOrbit.

Mazin, an astrophysicist, predominantly builds detectors for instruments in telescopes. After making subsequent observations with the telescopes, he writes up papers and goes back to repeat and refine the process. His graduate thesis was some of the original work done with MKIDs.

“The technology’s been under development since about 2000,” Mazin said. “I did my thesis on the basis of the technology and then I came to UCSB in 2008 and have been working steadily since to get it to this point. And we had our first light in the telescope about two years ago. It takes a long time to go from the very basic paper concept to ironing out all the wrinkles and getting the thing on the sky and taking science data. So it took about a decade to do all that.”

Though the new detectors are a considerable improvement on already well-established technology, Mazin asserts that they are still too cutting-edge for anything other than strict research. However, they may become available for broader scientific applications in the future.

“I think it could be a technology that’s present at every observatory in 10 or 15 years,” Mazin said. “It’s sort of at the place now where CCDs were in the late 70s, where there are one or two around the world and people are just learning about how to use them and how powerful they can be. But I can see them spreading very quickly because they offer significant advantages for a lot of different kinds of observations.”