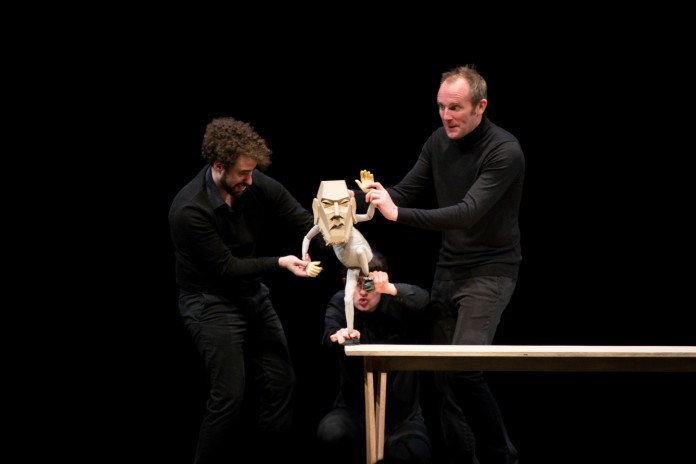 I sat down in Campbell Hall, ticket stub in one hand and silenced phone in the other, with a newfound enthusiasm for puppets rarely found in college students like myself. Honoring this unique and perplexing feeling, I sat down in the third row – as close as I could possibly get to the stage – and waited for what I didn’t know would be the most hilarious, unparalleled, and quirky performance I had ever seen on stage.

An original show from the UK, “The Table” – a “puppet-ception” of sorts about a snarky puppet who performs a Bible story – has been performed 175 times before Blind Summit Theatre came to the United States, according to the puppetry’s producer Stephanie Hay. Lucky for those of us at University of California, Santa Barbara, the company performed their renowned show for three nights, Nov. 6 to 8, thanks to UCSB’s Arts & Lectures.

The positive energy was prevalent among every audience member. It was clear that many people had not expected this pint-sized puppet named Moses – with a cloth body, cardboard cranium, and enough “interchangeable parts” to go around – to be as cynical as he was. But there was definitely enough sarcasm emitted from Moses’ mouth to fill the theater. The snarky puppet said at the beginning of the show that he would perform Moses’ death scene from Deuteronomy, in which the prophet is on a mountain speaking to God for 12 hours, after which he is killed with a kiss. As serious as this scene is, the “actor” performed it in an unconventional way: while moving about a wooden table, approximately five feet long.

The notion of a prop-less performance is not revolutionary, and yet the three puppeteers were able to convey the show refreshingly. They drew laughter from the audience with each of Moses’ (possibly) unintentional stumbles, which, rather unexpectedly, were improvised by the puppeteers: Mark Down, Sean Garratt, and Irena Stratieva. Along with these improvisations comes an entirely new show; each piece of dialogue, while partially rehearsed, was thought up on the spot based both on audience reactions and previous performances.

“Blind Summit’s work is created with and by the puppets – we follow the puppets and allow them to tell the stories they want to tell,” said Hay. “We don’t create a show and then make puppets for it. Maybe partly as a result of this, our shows are self-conscious puppetry – the very process of puppetry is laid bare to our audiences.”

A fresh item this show brings to the table (pun intended), in addition to a sarcastic little man, is a plethora of opportunities for viewers to use their imaginations. It was almost required to tap into one’s youth in order to enjoy the performance. The show was void of props, so when Moses “introduced” them on several occasions, it was imperative to picture that a record player, tea kettle, and bountiful garden were actually there, on the table. And I am proud to admit that the “blood” spouting from Moses’ arm, after an innocent audience member accidentally removed his hand, seemed so real to me that I cringed in horror.

“We want to make theatre shows that everyone wants to see, whether they are puppet connoisseurs or completely new to the art-form,” said Hay. Blind Summit Theatre was successful at doing just that.