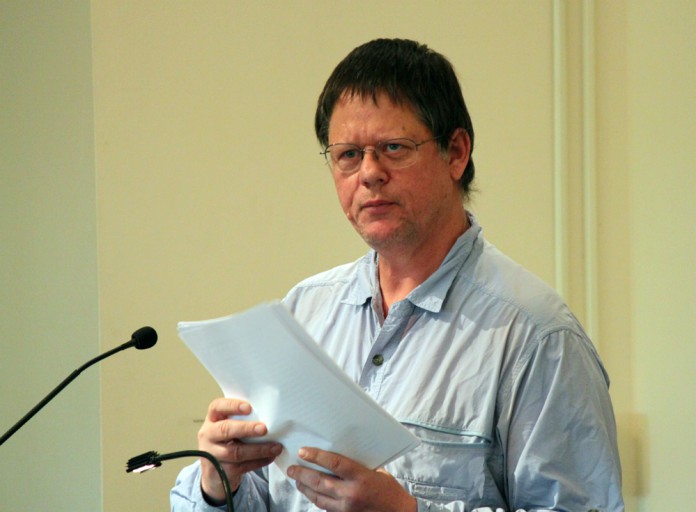 The Interdisciplinary Humanities Center put on an event in their current series, “The Value of Care,” on Wednesday, Nov. 6. This particular event centered around William T. Vollmann, a journalist and novelist who discovered that he was suspect S-2047 in the Unabomber case in the 90s.

Vollmann has conducted research in other parts of the world and has written over 20 books on his experiences, with another one currently in the works. He has spent a lot of time in the Middle East and, as such, has been marked by the FBI as someone to keep an eye on.

At the event, Vollmann shared parts of his article in Harper’s Magazine about his experiences being detained on three separate occasions by the FBI, and he talked about receiving his abridged FBI file and finding out he was a suspect in the Unabomber case and in the anthrax poisonings that took place after 9/11.

“I could not have foreseen my own emotions,” Vollmann said about his past.

Vollmann spoke to raise awareness of the faulty system of FBI surveillance. He described a potential future where everyone’s actions are closely monitored in order to avoid any forms of terrorism.

“I myself would rather become a terrorist victim than live under such a system,” Vollmann said. He feels that “surveillance creates a power differential” where those being surveilled have no idea who their watcher is, while those watching know everything about who they are surveilling.

While certainly critical of the FBI, Vollmann was sure to state that he does not think FBI surveillance is inherently bad.

“I cherish the sense, however illusory, that my government remains accountable to me,” he said. He also commented on the fact that the FBI could be using their funds for more reliable reconnaissance. “Investigations can be absurdly off base,” Vollmann said before addressing his guess that the FBI has probably spent around $100,000 in their pursuit of intelligence on him.

He closed his initial speech by talking about how the FBI messed up the spelling of his name, which led to misinformation. He felt this is especially problematic because “what if they mixed up one Muhammad with another and nobody cared?”

Despite his past experiences, Vollmann was very willing to talk with audience members. Though he tries to avoid the Internet and refuses to use e-mail, Vollmann has managed to stay up to date in political affairs. When one student asked what Vollmann thought of Janet Napolitano, former United States Secretary of Homeland Security, as the new UC President, he simply replied, “She certainly has to prove herself.”

Vollmann is still under surveillance—he still receives already opened mail and luggage that has been pried open at the airport—but his experiences do not discourage Vollmann from making his voice heard.

In fact, Vollmann is still a very public figure. His most recent publication—a picture book of himself dressed as a woman named Dolores—was an attempt by Vollmann to gain greater insight into the female perspective. Understanding those different from himself is something Vollmann strives for in his work.

“I think the best thing I can do,” he said, “is try to understand people who are nothing like me.”