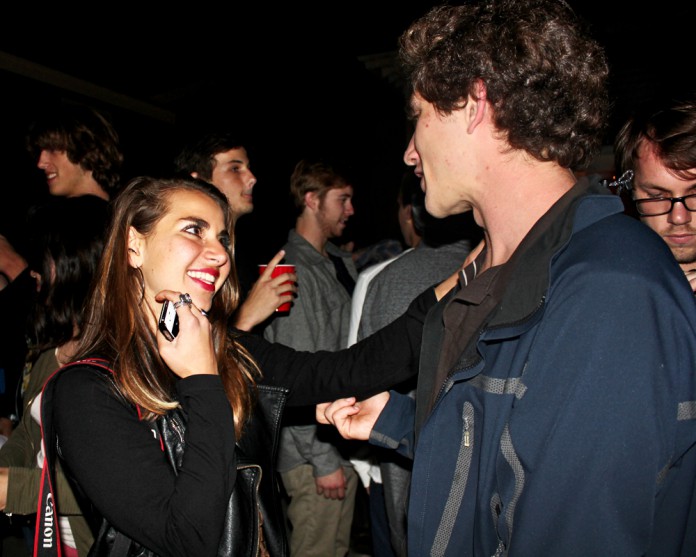 The night was unveiled by a collaborative trio of three local artists. Described by Speak Volumes as a cross between “intelligent dance, Gramatik-style trip-hop, and ambient techno,” electronica composer Khougaz (Pierce Frawley), belted out soulful vocals while on the balladic keys. Electrified with the charismatic, classic-rock guitar styling of Christian “Cardoza” Brown, and the engrossingly raspy voice of dynamic rapper Molly Hamill, the group’s enigmatic sound was cemented. The receptive crowd, sprinkled with funky, futuristic costumes, devoured the described “pseudo-trap” rhyming style of first-time performer Hamill.

Even the night’s most original costumes—a plush, full-bodied bunny; a ridiculously accurate Buzz Lightyear; and a futuristic Cowardly Lion straight from Oz—were no match in inventiveness to the night’s closer, Eddie Atom (UCSB alum Eddie Perez). Influenced by Mariachi music, marching band beats, and Asian/Middle Eastern ethnic sounds, Atom’s love for jazz and beat-boxing rings was apparent in his works. His electronic sound commenced as refreshingly original. The emotive quality of the set was well-versed; tracks were layered with synthetic textures, acoustic instrumentals, and haunting background vocals. Atom’s music provided the ideal explorative soundtrack to decorate and close the curtain on the night’s festivities.

This live music event tucked away in IV was a laudable display of community. The artistic platform Speak Volumes creates for local artists of all genres to share their music is one that is whole-heartedly enjoyed by students and community members. Sheathed with a lucidly mellow ambiance, this modest yet successful event more than pleased ears with impressive local talent and effort. As I overheard one attendee say, “I’m definitely feeling this.”