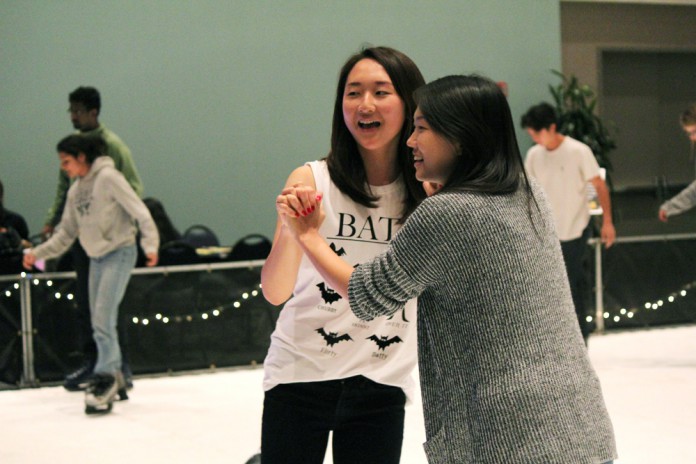 Outside the temperature was in the 70s, yet inside Corwin Pavilion, students were ice skating in a winter wonderland. The University of California, Santa Barbara’s Associated Students Program Board decked out the pavilion with holiday cheer to host a synthetic ice skating event for students and community members on Wednesday, Nov. 13.

“It’s a cool thing, I think, just in Southern California, because there’s no real ice skating here,” said Aditya Sharma, a fourth-year political science major and the AS Program Board special events coordinator. “So we thought, ‘Why not bring ice skating—in some fashion—to UCSB?’”

At the event, AS Program Board also had a card decoration table for attendees to make holiday cards and attach them to stuffed bears for students of the local elementary school. In addition to a host of charitable organizations, there was apple cider, sugar cookies, and a photo booth complete with various props.

Attendees were given raffle tickets upon entry and could win prizes ranging from clothing to gift cards for the campus bookstore. AS Program Board also provided the ice skates, making it easy for people to show up and get right on the (synthetic) ice.

TaiSonya Tidwell, a fifth-year anthropology and black studies double major, commented on the event’s use of synthetic ice instead of actual ice.

“It feels a little harder; I think maybe they just need to spray a little more of the stuff on there to make the ground more slippery,” Tidwell said. “But it’s pretty cool—it’s a cool first experience. If you’re just testing it out, I think it’s great for that.”

Students were able to enjoy the event while also feeling like they were helping out the community.

“I think it is great,” Tidwell said, laughing. “I’ve been having a lot of fun.”

Sharma discussed the different charitable organizations that were in attendance.

“We actually tried to get a couple different ones,” he said, “but we just didn’t get responses from them, so we went with IV Elementary and the local school here.”

Attendees glided (or stumbled) around the ice skating rink and huddled near the organization booths, and many had apple cider and cookies in hand.

The event was open to the public, free of charge, and the AS Food Bank advertised that donations could be made at the event. From students checking out the event in between classes to a mother helping her young son learn to navigate the synthetic ice, there was a decent turnout for the event.

Sharma described the biggest success of the day as, “Just having people come out and enjoy themselves—seeing that all of them are having fun and that they’re coming out.”