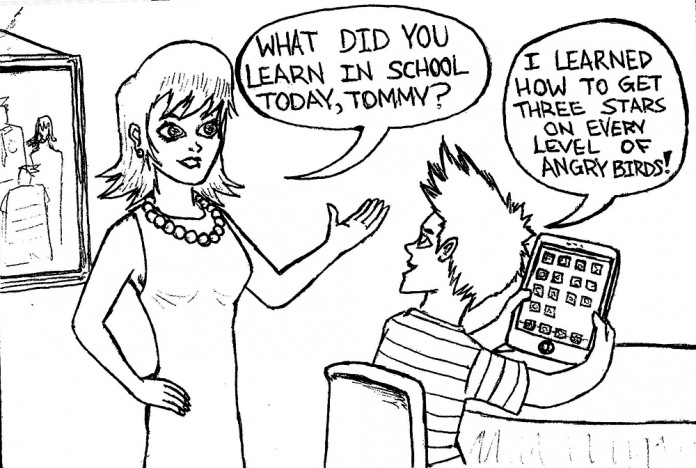 In a move inspired by a similar campaign in Los Angeles, over 1,000 Santa Barbara students—third through sixth graders at Adams, Franklin, and Washington elementary schools and 11th graders at La Cuesta Continuation High School—may be required to begin using iPads for school purposes. These students are presented with three options: purchase an iPad 4 with Retina display, 16 gigabytes of storage, and Wi-Fi capabilities for about $20 a month over the course of three years; bring the same device with the same features from home; or use a district-purchased tablet. All this is for the purpose of giving lower-income students and their families a chance to become familiar with this technology, preparing them for when they inevitably encounter students and teachers in junior high with more exposure to technology. But is such a radical initiative really worth the $624,384 cost?

The Los Angeles Unified School District, which set the precedent for the initiative in Santa Barbara, faced some problems regarding this project. According to the Los Angeles Times, teachers reported that they were unable to connect to the Internet in certain classrooms. Three hundred students bypassed security measures that prevented them from reaching prohibited sites on the Internet when using the tablets off-campus. Additionally, there was no clear explanation of what to do or who would be held accountable if the iPad was lost, stolen, or broken.

According to LAUSD superintendent John Deasy, the goal of the project is to provide students in poverty with the same tools that are so easily accessible to students from wealthier backgrounds. However, while the goal itself is laudable, the execution is not. Apple provides a wide variety of applications meant to be used for educational purposes, such as apps designed to help children learn how to read; apps that explain various mathematical subjects such as algebra and statistics; apps that teach biology, physics, chemistry, anatomy, and other scientific subjects; apps that teach history; and so on. As a part of this program, students will be required to download some of these applications so that they can be used as learning devices in the classroom and for enrichment at home. But these aren’t the only apps students can download onto their iPads—they can also download a wide variety of games and other means of distraction, like doodle pads and the like.

How many times have you stopped paying attention during lectures and gone on Facebook or surfed the Internet? If we, college students, older and (arguably) more mature, cannot exercise this much self-control, how can we expect high school and elementary school students to do the same? Also, there is the question of whether purchasing an iPad for every student is worth the price. iPads cost, on average, anywhere between $500 and $900. Suppose that the school district will cover the cost for each and every one of these iPads for every student in Santa Barbara Unified School District’s five high schools and 13 elementary schools—the amount of money required to cover all of this would be enormous. Is this movement vital in bumping up students of lower economic standing to the level of students from wealthier backgrounds when just notebooks, textbooks, and calculators will help them the same way academically?

The initiative has an admirable goal, but there are other ways to bring less wealthy students up to par with their more tech savvy peers. Computer labs in schools could be updated with the latest computers; this would not be nearly as expensive as providing each student with an iPad, because even though computers are more expensive, fewer would need to be purchased. Students can learn to use these computers as a part of their curriculum, and teachers and faculty can encourage students to use these computers at every opportunity. Security measures on school computers will be much more difficult to bypass, and, with fewer devices to manage, violations can be easily spotted and dealt with accordingly. The extra money that goes into purchasing iPads can be used for better resources, such as hiring new teachers, buying new textbooks, and funding more field trips—all of which will eventually help students more than purchasing iPads will.