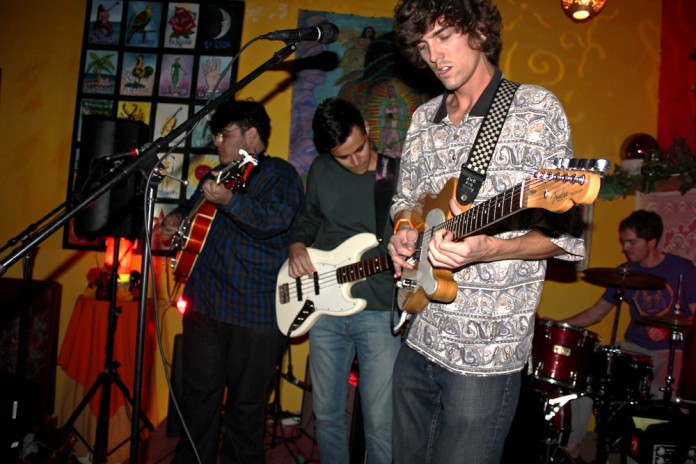 Aimed at promoting and releasing music by local talent, University of California, Santa Barbara’s campus radio station 91.9 KCSB-FM has expanded its brand with the start of its very own record label, Bank Burner Records. The label held a free, all-ages record release party and fundraiser for the debut of Dante Elephante’s first 7-inch record this past Saturday, Nov. 9, at Del Pueblo Café. The night was significant for both parties involved, as it was the announcement of Bank Burner Records and the debut of Dante Elephante.

The event originally had the band That Ghost planned to open the night in support of Dante Elephante, but for unstated reasons, the band had to cancel and was replaced by groups Cave Babies and Remambran. The two acts, whose members are affiliated with KCSB, played two short, minimal sets and were followed by the Sun Daes.

Cave Babies is the solo project of Joshua Redman, a KCSB DJ, who played short quirky songs on a ukulele. He strummed along and sang some tongue-in-cheek songs about partying and “being green” while the crowd sat on the floor to watch him up close. He played around 10 songs, each about two minutes in length. Composed of clever and touching lyrics, the set was an intimate start to the night.

Remambran, made up of KCSB DJ Mallory Watje leading on guitar and UCSB’s Paul Ray backing on drums, followed Cave Babies with another short set. The rock duo played dark and moody songs, which contrasted the music before and thereafter. The dissonant sounding guitar parts and thumping drums accompanied the crooning vocals of singer Watje.

The third band, Sun Daes, is a four-piece surf rock band composed of JD Severino on bass, Jared Payzant on drums, Gabe Poissant on guitar and vocals, and Max Goldenstein on guitar and vocals. Featuring lead and backup guitars, heavy bass lines, vocals, and backbeats of the drum, the band picked up the pace with their fast and cheery songs. While most of the songs had an overall sunny disposition, the songs varied in composition and feeling. Some were mellow and others loud and frenetic, and the variety made the set a pleasure to watch. The guitars were a standout of the group, as they played very melodic lines that nicely accompanied each other throughout the set. Similar in theory, Sun Daes provided a good preview of what was to come.

Headliner Dante Elephante arrived to an eager crowd that seemed to be very familiar with them, as the crowd became ecstatic once they began to play. Dante Elephante consists of Tommy Devoy on drums, Chris Lopez on bass, Ruben Zarate on guitar and vocals, and Kevin Boutin on guitar and vocals. The band’s indie, surf, pop rock music immersed the venue with energy, playing a number of jovial, up-tempo songs. Made up of jangly and glittering guitars, their music brought the crowd so much excitement that hardly anyone was standing still.

The four-piece band played the two songs off of their newly released vinyl, along with some older songs, much to the delight of the crowd. Many, in fact, were dancing in union to the fast pace of the music, throwing balloons in the air, and two revelers even crowd surfed. The band rocked the place with wonderful tunes and sent everyone home happily.

The concert and fundraiser was a success, giving away a total of 20 records to those that donated $15 or more.

“We accepted a $40 donation from a community member who had read about it in the paper and who dropped by the cafe just to show support for our initiative. She didn’t stay for the live set,” said KCSB’s Development Coordinator Ted Coe. “She was an elder member of our community, so that was a treat!”

If this show was any indication of what Bank Burner Records is going to deliver, then the label certainly has a bright future ahead of it.