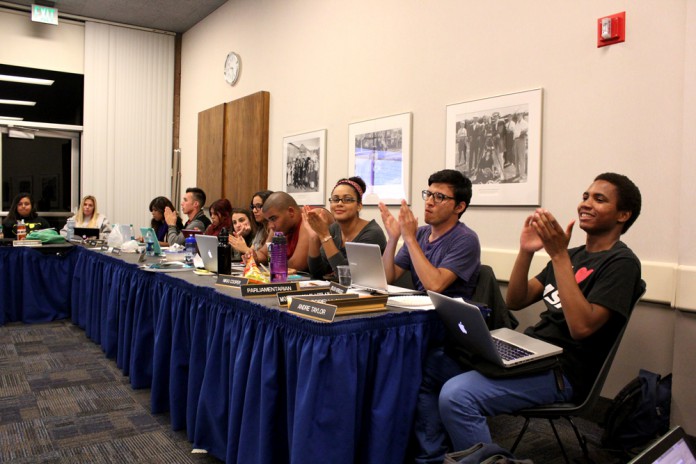 “A Directional Resolution to Explore Possible Funding for Undocumented Student Scholarships,” authored by Collegiate Sen. Marvin Ramirez, calls for the formation of a group dedicated to pursuing various means of funding for the undocumented student population. An important postulate of the legislation calls for a self-sustaining endowment, created through donations, that would eventually become large enough to fund scholarships for incoming undocumented students.

By implementing the program through Associated Students, the group would obtain status as a non-profit organization and therefore avoid taxation that could detract from its larger fundraising goals.

The first piece of legislation to pass regarding the Students of Color Conference (SOCC) was a request of $332 from Finance Board’s BCC fund by Off-Campus Sen. Andre Theus, to be added to the existing AS Senate travel and conference budget. The original travel budget had been set at $150, and Theus proposed allocating these as well as the requested funds to eight senators who had previously been rejected from the SOCC upon application. This action would allow these senators to attend the Los Angeles conference from Nov. 15 to 17 using the Senate’s own budget rather than that delegated to the designated pool of accepted applicants.

The second piece of legislation related to SOCC also sought to address the rejection of these senators, as well as that of other elected officials. Authored by Off-Campus Sens. Jimmy Villarreal and Jake Orens, “A Resolution Regarding Students of Color Conference” mandates that 15 elected student officials who had purposely been excluded from the SOCC application process be added to an existing wait list of around 30 other applicants.

These officials would then be considered for acceptance using the same criteria applied to other wait list members. The resolution is based on an agreement between Villarreal, Orens, co-chairs of the Student Commission On Racial Equality (SCORE) Angelica Cano and Hani Tajsar, and AS Attorney General Sawyeh Maghsoodloo. SCORE says that their decision was based on “who had access to monetary resources and who did not have that privilege.”

Villarreal saw the resolution’s victory not only as a triumph for himself and his fellow senators but also as a testament to the power of collaboration between student groups.

“Something I think is really important is that this resolution was agreed to by both the SCORE co-chairs and the Attorney General,” Villarreal said. “That’s something of value, that we were all able to come together, and even though there were disagreements, we’re able to pass something that everyone can get behind.”