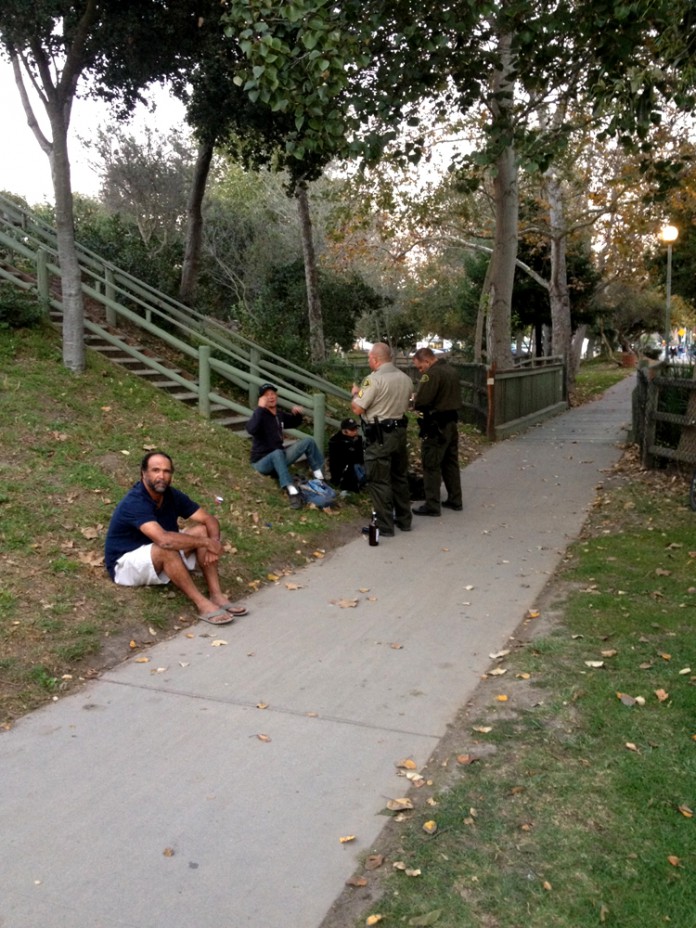 November is National Homeless Awareness Month, but Isla Vista’s houseless residents, from Anisq’Oyo’ to Estero Park, claim they are facing mounting harassment from police and dealing with a shifting local paradigm over formally acknowledged living arrangements.

Many houseless residents feel that their presence is increasingly unwelcome in the context of the gentrification of downtown Isla Vista. The sentiments of the houseless community often fall on similar subjects—the respect of human dignity and an end to what they feel are discriminatory police restrictions.

“A handful of homeless people out here, they ain’t doing nothing” said Rick Walker, a houseless resident of Isla Vista.

Timothy Glass, another houseless resident, added, “I’m sick and tired of all the harassment.”

“Our message to the homeless is ‘hey, if you follow the rules, you won’t get in trouble…you’re a human being and we treat you with respect,’” said Plastino. “The majority would tell you that our treatment of the homeless is exactly the way we would need to do it under the law.”

“Houseless,” a documentary produced in Isla Vista from 2009-2010, provides direct insight on the lifestyle and personalities surrounding houselessness in the local community. The film was screened at the Santa Barbara Hillel in conjunction with the Community Affairs Board (CAB) and Humyn Rights Week.

The film served as a testimonial to the humanity of the houseless community, but underlying the documentary was grim introspection on the realities surrounding social inequity. Featuring the iconic “Pirate” and a range of characters, “Houseless” strongly resonated with both students and houseless in the crowd.

“I think it meant a lot to them,” Quan said. “Seeing their friends that were now passed… And they were really excited to see themselves on the screen. To see the houseless and community members, represented in one room, was very cool.”

“Houseless” was filmed over five years ago—and since then major changes have occurred in the Isla Vista community.

Many of the Isla Vista houseless contend that, recently, local police have engaged in undue harassment. Despite the regular policing of Isla Vista Parks ordinances, the houseless are concerned that restrictions on their freedom of movement are meant to drive them out completely.

“Its nothing like what happened back then… We feel it’s worse right now,” said houseless Isla Vista resident, Kona “Smalls” Cummings, in reference to “Houseless.”

Cummings explained that policing of open container and non-camping ordinances were a regular occurrence. He also cited the fact that cheap, accessible alcohol such as Taaka caused health and safety issues within the houseless community.

“They need to take Taaka off the market…it’s not worth $5 to go to jail for,” said Cummings.

Many of the Isla Vista houseless realize the danger of ticketing or incarceration that goes along with public intoxication—some say they just stick to marijuana—but the issue has served as justification for police officers to ramp up enforcement. Many pointed to the targeted discrimination of the houseless as an ethical and civil gray area considering that the same issues, and often more potent substances, can be found among student residents.

Cliff, a houseless resident featured in the “Houseless” documentary, described what he believed were unauthorized “banishment laws” applied to the Isla Vista houseless.

“They say if you get a ticket for smoking or drinking or camping you get kicked out for 48 hours, if you get another ticket you’re kicked out of all the parks for a year,” Cliff said.

From a legal standpoint, these are Isla Vista public spaces that are owned by either the local Parks District or by Santa Barbara County. Plastino indicated that both local ordinance and county law govern IV Parks, but banishment occurred only after a series of “violations and warnings.”

“It’s a gradual scale,” Plastino said. “The year banishments are for very serious and habitual offenders.”

Though fair use of public space has been a common historical arrangement, the Isla Vista houseless contend that an intolerance against their presence has barred them from inhabiting, or even visiting, certain public spaces.

Cliff recalled the issue with an example: the blueprint-plans for the Pardall stone bench across the street from Coffee Collaborative.

“This picture showed a group of people at that bench playing chess on that built-in table. The cop told us were trespassing if we sit on that bench… It’s a place for people to gather and meet and converse or whatever, but if you’re homeless you’re trespassing.”

On Friday, Oct. 17, houseless residents were issued an eviction notice to leave the parking lot area around People’s Park.

“The houseless resided on the outsides of those properties, because they were privately owned and nobody was there,” said Ali Guthy, a Collegiate Senator and liaison to CAB.

Initially, the Isla Vista Redevelopment Agency (RDA) owned the parking lot and land surrounding the medical clinic and former church building. The Santa Barbara City website notes that all IVRDA properties are now all the property of the County—a “Successor Agency” under the supervision of an Isla Vista Oversight Board.

The expulsion of the houseless from this property reflects a limiting number of public spaces available for co-habitation. With a no-camping ordinance and allegations of loitering an overarching hazard, much of the houseless population is seeing dwindling options in Isla Vista.

Carmichael, a houseless resident, expressed his frustration with the limited opportunity posed by redevelopment.

“The college is trying to own Isla Vista,” said Carmichael. “1.9 miles… they want to own it, and you, the kids. Not just us. They want us out, so you don’t become this… Does that sound fair?”

Guthy also expressed concern about the difficult circumstances faced by the houseless residents of Isla Vista.

“Currently the houseless in IV have been kicked out of their space of residence and they’re no longer being provided funds from Casa Esperanza to have weekly lunch programs,” she said. “So this is a very negative climate for them at the time. It’s just about fixing that. Were trying to work with local businesses to create an additional source of food and resources that they could use.”

The shelter “offers that interim step” for the houseless “to get cleaned up and get back into society,” Plastino said.

Guthy also said, from her understanding, that “it’s going to be an application based program and it will be a sober program… There will be bed space, but you will have to submit to the restrictions of the program, which include sobriety.”

For the most part, the houseless inhabit a cultural swath that is largely out of sight and out of mind for the student population of Isla Vista. But Cassandra Anderson, a houseless resident that could easily be mistaken for a student, summed up the perspective of the houseless community: “This is our home.”