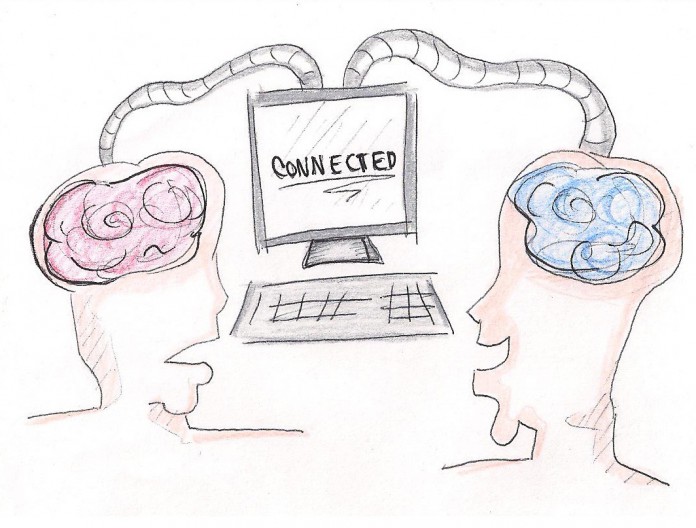 Researchers at the University of Washington are believed to have reached a technological milestone: the first human-to-human brain interface. One researcher, Rajesh Rao, sent a brain signal directly to colleague Andrea Stocco with electrical brain recordings and magnetic stimulation. This stimulation reached the left motor cortex region of Stocco’s brain through a coil he wore on his head, and caused his right index finger to move as Rao commanded.

This experiment has been conducted between rats and even between a human and a rat at Duke University. Electroencephalography (EEG) is a common technology used to record brain activity, ideal as a noninvasive procedure. Transcranial magnetic stimulation is used to induce a response, as is seen here on the motor cortex of Stocco’s brain. Students Matthew Bryan, Bryan Djunaedi, Joseph Wu, Alex Dadgar, and Dev Sarma wrote computer code that translated the brain signals into a command to move Stocco’s head.

“The internet was a way to connect computers, and now it can be a way to connect brains,” Stocco said. “We want to take the knowledge of a brain and transmit it directly from brain to brain.”

The two researchers were in different rooms. Rao played a video game and mentally told himself to move his right hand without actually stirring. He had to train himself to transmit the brainwave for the command of moving his right finger so that the computer could receive it. Stocco (who wore noise-canceling ear buds and did not look at a screen), across campus, almost immediately and involuntarily pressed the space bar in front of him as if to fire the cannon on Rao’s game.

Chantel Prat, an assistant professor as well as Stocco’s wife and research partner, described the physics of the process. Once the precise brainwave is transmitted, it is sent to the computer connected to the transcranial magnetic stimulation device (connected to the motor cortex) via the Internet. The magnetic field change triggers the electrical current that sends a signal, which excites neurons and causes the movement.

This could very well be the next step in the use of the Internet as a tool for information accessibility. This increasingly intimate interconnection between people could be used for complex cognitive skills and exercises with further research. This ties into the implications the technology has on education and training, Prat says, particularly with knowledge that cannot be easily translated into words.

Naturally, this spawns a large range of possibilities for usage. However, the scientists quickly assuaged worries of involuntary mind control or privacy invasion. The technology could be used to break down communication barriers of all kinds, such as language or disability. It could also be used in urgent situations, as Stucco suggested, such as helping a passenger land an aircraft if the pilot is somehow indisposed. He and Rao plan to test more complex information transference on a larger pool of subjects.