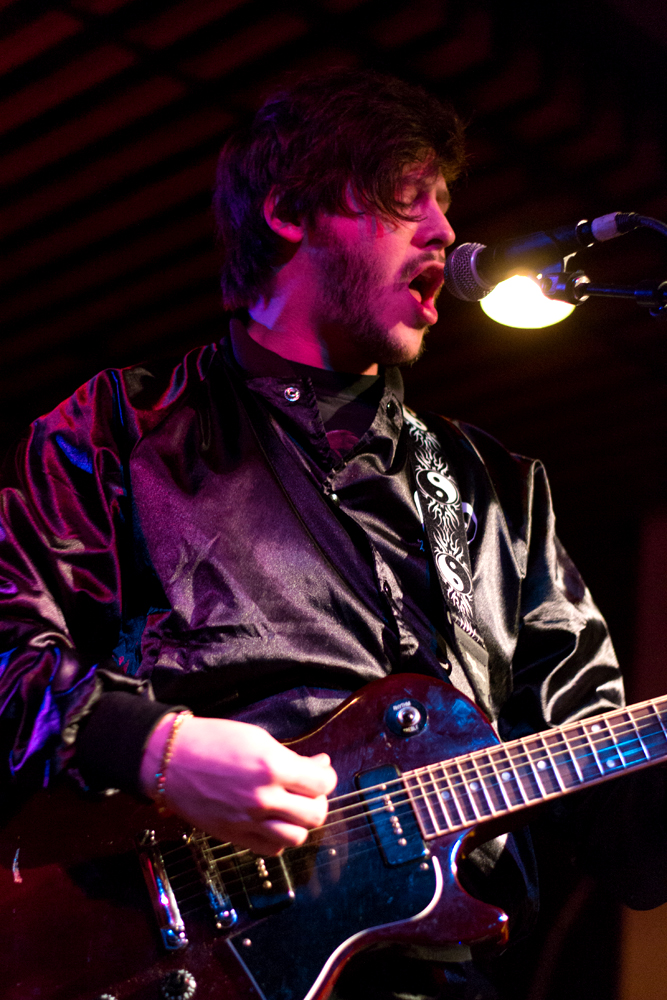 Can you think of any better way to spend a Friday night then at a rock show? What if you attended an institution regarded as the “second best party school in the nation” and it was the weekend before Halloween? Does live music still sound exciting? Well, it was. In a show sponsored by the Associated Students Program Board, the indie surf-rock band Wavves, along with opening act Cosmonauts, performed in The Hub at University of California, Santa Barbara this past Friday, Oct. 25.

While the show didn’t draw a significantly large crowd, those that did attend were bestowed with great and lively music. As a whole, the show may not have been as crazy as a Halloween party in Isla Vista, but the music and ambiance was just as intoxicating.

Hailing from San Diego, Wavves is the recording project of guitarist Nathan Williams and bassist Stephen Pope, who play what can be described as “noise pop.” Combining elements of punk, surf, alternative, and psychedelic rock, Wavves has a high energy, fuzzed-out, lo-fi style that definitely translated to one frenetically fun show.

The Cosmonauts are a garage/psychedelic rock band from Orange County, California. The four-piece band started the show on a sweet note. Playing laid back, melodic tunes, the band set an easy and chill mood for incoming attendees. The band was a surprise to hear. They are relatively unheard of, so I had assumed they were some random alternative band, but the Cosmonauts were actually quite good. To a certain extent, their sound is comparable to that of Real Estate and Oasis. The band wasn’t around for very long, as they only played about seven songs in a set that lasted roughly 35 minutes. Yet Cosmonauts provided an enjoyable contrast to Wavves’ loud and energetic set that followed.

After the pleasant sounds of Cosmonauts, the restless crowd grew eager and started to cheer as Wavves began setting up. Once ready to perform, the band got into the mood right away and started with the track “Post Acid,” pleasing fans with its fast pace and loud, scratchy guitars. The ecstatic crowd was jumping around, vibing off the music and band’s energy.

Wavves didn’t waste much time between songs and didn’t say much the entire set either. They only stopped to blurt song titles, as they weaved in and out of different songs and albums.

Wavves primarily performed songs off their latest album “Afraid of Heights,” including the singles “Hippies is Punks” and “Demon to Lean On.” Other songs included were “Supersoaker,” “Life Sux,” and “Bug.”

The San Diego natives also played “Nine is God,” a song which Williams stated was recorded for the Grand Theft Auto V soundtrack. Wavves ended with “Green Eyes,” a love ballad that allowed the band to slow down the pace, but with enough static and fuzz to go out on.

In total, the band played about 19 songs in a set that lasted around 50 minutes. Despite the long set list, their songs were short and sweet, and the transitions between them brief.

The set was certainly a pleasure to hear, but because their songs don’t have much variation in sound and composition, most of the songs blended together, making the set feel like one long song. It didn’t seem to matter to the crowd, though, as they rocked out the entire time. They even asked for an encore, but were unsuccessful in convincing the band.

All things considered, the band delivered tight sounds that weren’t too far off from their recordings, and the show was definitely an alternative, fun way to spend a night in UCSB. Considering there was hair left on the floor afterward, it’s safe to say attendees very much enjoyed themselves to the music of Wavves.