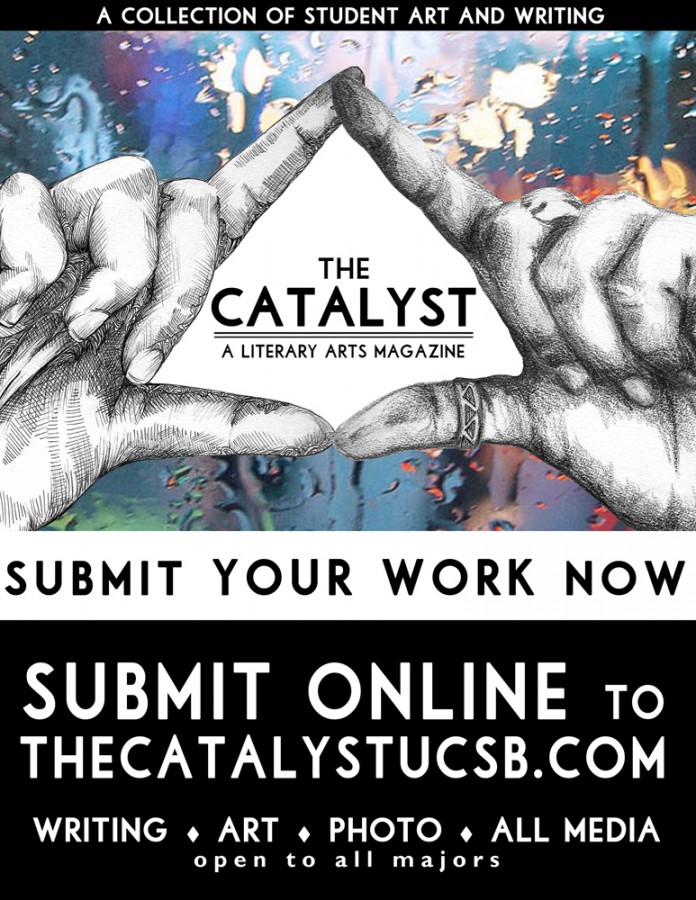 The Catalyst, a student-run literary arts magazine here at the University of California, Santa Barbara, is facing an exciting revival after its 2007 departure.

The Catalyst’s website defines the word catalyst as “an agent that stimulates a reaction, development, or change,” and tidal waves of change is exactly what the innovative magazine will be bringing to the literary and arts world.

“The Catalyst is a creative and academic bridge. It’s a new genre we’re trying to field,” said Natalie O’Brien, a third-year English major and editor-in-chief of the magazine.

The Catalyst’s first quarterly issue, “Reactions,” will be released in January 2014. It will be a collaborative piece that primarily includes poetry, short stories, prose, illustrations, and photography. These student-submitted works of art will be handcrafted by the magazine’s layout editors into aesthetically pleasing collages. The Catalyst is shedding its old image as a magazine of purely black-and-white text by embracing vibrant photography paired with artistically written and creatively arranged essays.

“I want it to be a book of art, a place that gives students the opportunity to make their work visible to the world,” said O’Brien.

“Reactions” will feature different mediums of writing, art, and photography that interrelate and work together. The issue is divided into various sections, each with its own artistic theme. The works of art not only respond to the topic but also correspond with one another. For example, you might find a student’s band lyrics next to a memoir created through a series of haikus, or you may read a poem written as a response to the photograph beside it.

“Everything in this issue responds to something else,” said O’Brien. “That’s why it’s called ‘Reactions.’”

Various genres of art meld together in this pioneering magazine, a culmination of numerous artistic and literary forms collaborating seamlessly.

“We’re trying to draw from different communities to create a common ground where the artistic, creative, and literary minds can connect,” said O’Brien.

However, The Catalyst isn’t limiting its impact on UCSB’s cultural scene to just the use of the printed word. It’ll be hosting the Reactions Film Festival, free to all students, on Thursday, Nov. 21, in IV Theater. The deadline for student submissions of films — pieces up to five minutes long that respond to the definition of “catalyst” — is Nov. 8. There will also be a student art gallery, where student art can be submitted to be displayed and sold.

The magazine will also be making its way into the digital world; the website, thecatalyst.ucsb.com, will soon be hosting an online bulletin board informing UCSB students of local arts and humanities events. The site will also boast a multimedia section featuring student bands and films. Currently, the website hosts the 15-page preview of “Reactions,” which O’Brien and Layout Editor Julia Marsh have put together to illustrate their vision.

Whatever form of art you’re interested in, there’s no doubt that you can easily find an artistic endeavor that suits you: whether it’s picking up a free copy of the beautifully crafted art magazine at the launch party in January, attending the Reactions Film Festival, visiting the website, or submitting your own work online. The Catalyst provides an innovative presence in the the world of university magazines, as well as those of art, literature, and film.

“The Catalyst is truly its own definition,” O’Brien said, proudly. “It’s making changes in the community and in people’s lives. A catalyst itself doesn’t transform, but it does change everything around it.”