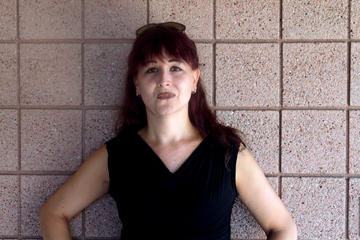 For the last five years, the Los Angeles zombie-pop band Alright Alright has been rocking venues throughout southern California with their smoothest lineup yet. That lineup includes Tamsin Cleo German, an associate professor in the Department of Psychology at the University of California, Santa Barbara.

While German is first and foremost a professor, she explained that her band is a wildly fun projection of herself and that she doesn’t expect to “blow up” anytime soon. However, the group does enjoy local fame around Los Angeles, and they play on the Sunset Strip regularly.

In order to promote and make their music available, Alright Alright is on Hive Mind Records, but they self-produce and self-release all of their own material. Hive Mind Records is an independent record releasing company, and Alright Alright is currently their only signed artist. The band’s music is also available on Bandcamp, an online music store, as well as YouTube and various other sites where their music can be purchased. Alright Alright has created their own “B-Movie inspired” brand vision that isn’t going anywhere.

That being said, they just released their latest four-song EP in 2012 and are even planning a show for this winter in order to debut three new songs from an upcoming EP. It’s been five solid years, and the band is still going strong.

After the division of her first band, German went through a series of auditions with bands she found through Craigslist, although none of them were the right fit for her.

“Sometimes, you know, you walk in and you know immediately that you’re not the right person,” said German.

But after posting her own ad on Craigslist, she heard back immediately from a man named Jeff Springer, who is now the lead guitarist of Alright Alright. From their initial meeting, German knew she had found the right fit. Alright Alright has been making music ever since, and the group looks forward to a long and exciting career.

Maintaining a high level of dedication has never been a problem for Alright Alright; they practice and write songs as frequently as possible, though German expresses that the biggest difficulty is frequently playing shows. Because Santa Barbara is not a large metropolitan city like Los Angeles or San Francisco, it’s difficult to find a lot of bands who are trying to make it big and play shows regularly. Local musicians are making records but they’re not pushing for releases. It’s also difficult to find local gig opportunities, which is one of the reasons German moved from Santa Barbara to Los Angeles a few years ago.

“It [finding gigs] is a lot easier to do in LA than around here,” said German. “It’s just such a small town. I used to live here before I was in the band, and one of the reasons I moved is because I like to go see shows a lot and play.”

Compared to other cities, Santa Barbara may be lacking a true music scene, but Alright Alright is less concerned with making it big and more interested in making enjoyable music with good friends, and having a great time while doing it.

“It’s one of the most fun things I’ve done in my whole life,” said German.