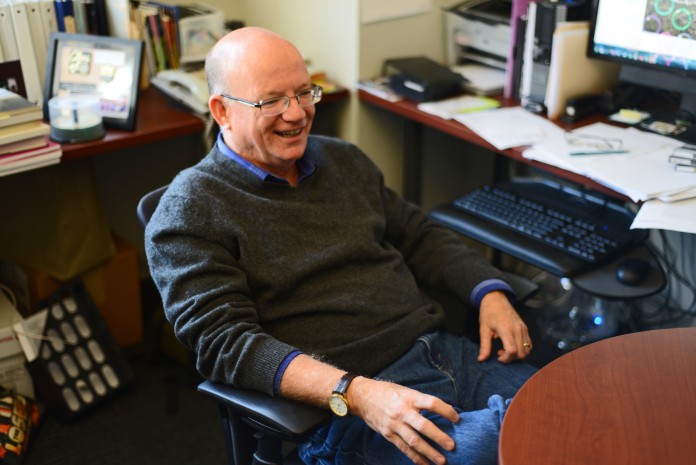 DJ and Joe Palladino, mainstays in the film and media studies department, have a history of working together. They’ve worked at a liquor store, a bookstore, and a comic book store. The liquor store and bookstore are both now closed.

“A lot of places where we worked don’t exist anymore,” said DJ, jokingly.

“We’re kind of the anti-Midas touch,” chimed in Joe.

The brothers have been a part of the Santa Barbara community since 1967, when they moved here from the San Fernando Valley. Joe graduated from the University of California, Santa Barbara as a film and media studies major. DJ was a UCSB English major who became disillusioned with English literature his senior year and decided to pursue writing instead. DJ worked first for the Santa Barbara News and Review before it became The Santa Barbara Independent, and Joe had a column for the paper at the same time.

Joe started working at UCSB right out of college and eventually helped DJ get a job at the university as well. Joe worked as a production assistant for faculty member Dana Driskel. Besides a silent film he made during his college years, Joe had very little film production experience.

“So he said, ‘Hey, come be the production assistant,’ and I’m like, ‘Sure, that makes sense,’” said Joe, commenting on his exposure to the filmmaking process. He gained some of his insight by helping students make their first films over the next two years.

He took a break from UCSB up until 16 years ago, when he came back with a strong presence in the film and media studies department as the current Undergraduate Academic Advisor and Internship Coordinator. Joe is very active in the department; he works with Word Farm’s yearly screenwriting training camp, an annual media journal, “Script to Screen” film screenings, and the Reel Loud Silent Film Festival.

DJ was grading papers at UCSB before he started watching over the Film Society, leaving him in charge of the Magic Lantern Theater Program a few months after it started.

“Joe asked me if I wanted to watch over the Film Society for a couple of months, and that was 10 years ago,” said DJ.

DJ is also one of the advisors for WORD, Isla Vista’s Arts and Culture magazine, so he splits his time between working for The Santa Barbara Independent and at UCSB. As the older brother, teaching is in DJ’s nature. When his son was younger, the two of them would go to restaurants and movies together and write a joint review of the experience. DJ helps to bring this sort of learning environment to WORD.

Although their distinct sectors keep them from collaborating and working together, the two brothers do often work parallel to one another and are confident in their strong working relationship. Like any siblings, they’ve gotten in little tiffs before, but never over anything serious, and at the end of the day, each of them supports the other in his endeavors.

“Joe was a really big help at the beginning of Magic Lantern,” recalled DJ.

Both DJ and Joe work very hard to give students the push they need to expand on their own talents and be successful. Their love for the arts is obvious, and they help those who share that love cultivate and explore their passion.

“I think one of the thing we both enjoy is seeing the arts foster,” said Joe.

The Palladino brothers provide an environment of encouragement and support for every student with an idea and a passion. They strive to instill confidence in every student, so, as Joe puts it, each student believes “they can actually do something.”

Their involvement on campus, dedication to their students, and creative talents might just demonstrate that the Palladino brothers do, in fact, have the Midas touch.